Can Aircraft Take-off and Land at the Hong Kong International Airport under the Influence of a Tropical Cyclone?

Can Aircraft Take-off and Land at the Hong Kong International Airport under the Influence of a Tropical Cyclone?

You may have come across the following situations: While flights were still able to depart and land with the No. 8 Gale or Storm Signal in force, but a significant number of flights were delayed or even cancelled when the No. 3 Strong Wind Signal had been issued. But why is this the case?

The stronger the crosswind, the greater is the potential risk for aircraft taking-off and landing (see "Crosswind and Aviation Safety"). Moreover, the strength of crosswinds over the Hong Kong International Airport is closely related to the position of the tropical cyclone relative to Hong Kong. Do you remember the two tools mentioned in the Observatory’s blog "Kidney and beach ball"? The "Beach ball" can help us predict whether a tropical cyclone will bring crosswinds to the airport. For instance, if a tropical cyclone adopts a track (see Track A in Figure 1) which passes to the north of Hong Kong, when it approaches Hong Kong from the east, the airport will first experience crosswinds from the northwest which would affect both the take-off and landing of the aircraft. When the tropical cyclone departs Hong Kong to the northwest later on, winds over the airport will become southwesterly, nearly parallel to runways. However, if a tropical cyclone passes to the south of Hong Kong (see Track B in Figure 1), the situation is just the opposite: The airport area will first be affected by the northeasterly winds nearly parallel to runways, and then the departing tropical cyclone to the southwest will bring southeasterly crosswinds to the runways which could have a greater impact on aircraft operations. 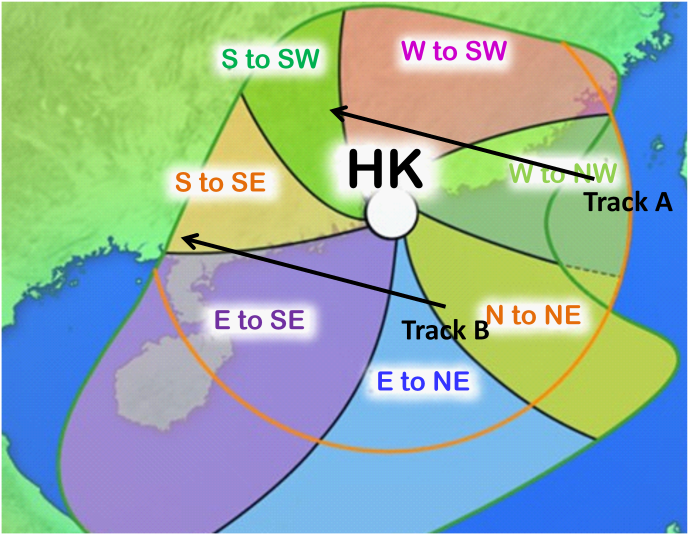 The track which brings about sustained crosswinds

If you take a closer look at Figure 1, you may notice that the area in which tropical cyclones may bring southeasterly winds to Hong Kong is greater than the one that will bring northwesterly winds. In other words, even when a tropical cyclone is located away at Hainan Island, significant crosswinds could still occur at the Hong Kong International Airport.

Generally speaking, taking-off and landing of aircraft will be affected when crosswind reaches 20 knots or above. To facilitate aviation forecasters to predict the occurrence of crosswinds brought by tropical cyclones, the Observatory has produced a set of "Crosswind Kidneys" specifically for the Hong Kong International Airport. They are actually probability curves of crosswinds at runways exceeding 20 knots when a tropical cyclone is in the vicinity of Hong Kong (see Figure 2). The "asymmetric butterfly-shaped" curves show that the airport is more likely to be affected by significant crosswinds when a tropical cyclone is passing to the south of Hong Kong (Track B). In this case, there is a higher chance of encountering crosswinds though the storm is departing and the overall threat to Hong Kong is diminishing.

Figure 2   Probability curves showing 10%, 30% and 50% probability of crosswinds exceeding 20 knots over the airport under the influence of tropical cyclones

A tale of two tropical cyclones - "Usagi" and "Kalmaegi" 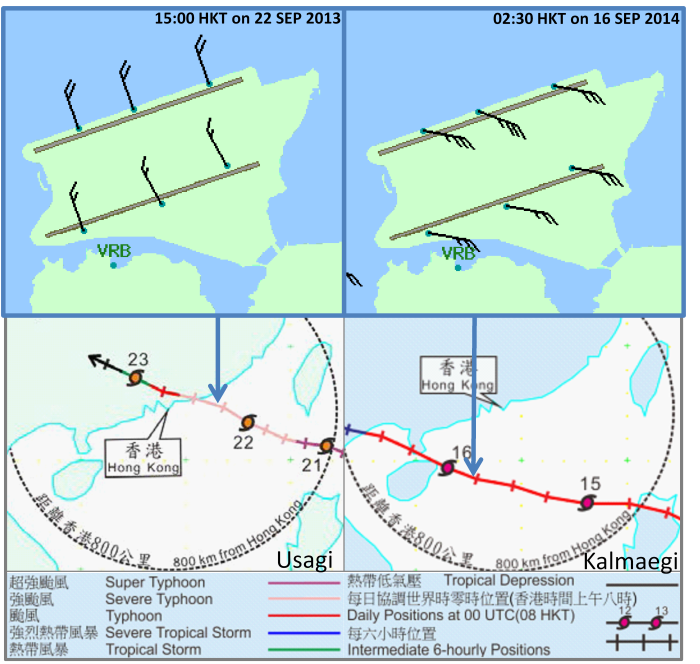 Figure 3   Tracks of Usagi and Kalmaegi, together with the wind speed and wind direction at runways of the Hong Kong International Airport when crosswinds reached 20 knots (Blue arrows indicate the approximate onset time of crosswinds reaching 20 knots).

As shown in the time series of the Figure 4, northwesterly crosswinds of 20 knots had started affecting the airport runways about 10 hours before Usagi came closest to Hong Kong. When Usagi departed Hong Kong, with local winds backing to southwesterly, crosswinds over the runways weakened and their impact on aircraft operations also reduced.

Contrary to the case of Usagi, before Kalmaegi's closest approach to Hong Kong, east to northeasterly winds prevailed over Hong Kong and crosswinds at the runways were not significant. However, when Kalmaegi moved away from Hong Kong, crosswinds picked up instead. Crosswinds reaching 20 knots affected the runways for more than ten hours after its closest approach, bringing a longer lasting impact on aircraft operations. In short, tropical cyclones adopting different tracks across the coast of Guangdong may result in vastly different impacts on the aircraft operations in Hong Kong.

Can aircraft take-off or land when a tropical cyclone warning signal is in force?

As shown in Figure 4, the taking-off and landing of aircraft do not have a straight forward relationship with the tropical cyclone warning signals; whether or not an aircraft can take-off or land is mainly determined by the crosswinds as well as windshear and turbulence conditions (see "Impact of Strong Wind Associated with Tropical Cyclones on Aviation Operation"). Even when the No. 8 signal is in force, if the winds were blowing in nearly the same direction of the runways, they generally have a minor impact on aircraft operations. On the other hand, if the winds were blowing across the runways, particularly the southeasterly winds through the mountain gaps of Lantau Island, even though the No. 3 signal has replaced the No. 8 signal for the departing storm, the crosswinds may still exceed the operating limit of aircraft, and flights would be delayed or cancelled. Apart from meteorological factors, airlines may also change their flight schedules due to other factors. Therefore, please be advised to check the latest flight information before departing for the airport.