Around 6 p.m. on the evening of 31 July 2011, two members of the public, Mr. Harold Chan and Mr. Alfred Lee, captured on photos a fascinating atmospheric optical effect at Tai Po (Fig.1) and the Victoria Harbour (Fig. 2) respectively.  What they saw was an asymmetric "sun dog" phenomenon.  They both observed a "sun dog" to the left of the sun, and apparently did not see any "sun dog" to the right.  It was also Mr. Chan's re-acquaintance with this special phenomenon after his last report of "sun dogs" in 2009 (see detailed explanation and analysis in "HKO e-Bulletin on Educational Resources", Issue No.23, September 2009).

Fig.2   A "sun dog" to the left of the sun observed over the Victoria Harbour. (Photo: courtesy of Mr. Alfred LEE) 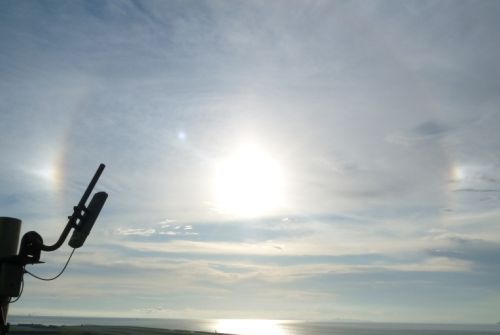 Round about the same time, duty staff at the Observatory's Airport Meteorological Office also observed a "sun dog" phenomenon.  From the photo taken (Fig. 3), symmetric "sun dogs" on both sides of the sun could be clearly seen.

Satellite image at the time (Fig. 4) showed that areas in the vicinity of Hong Kong were generally covered by high clouds.  Nevertheless, sunlight could still penetrate through these high clouds.  Checking against the photos taken at Tai Po and the Victoria Harbour, the luminous patches all appeared reddish in colour on the near-sun side, and they were all spotted at the same altitude horizontal to the sun.  These indications confirmed that the phenomena observed were indeed "sun dogs".

But then for the same phenomenon, why did it appear both symmetric and asymmetric when observed? Mr. Chan's photo (Fig. 1) showed that the cloud layers to the left and right of the sun were unevenly distributed.  At sunset, the sun's elevation was already rather low such that the "sun dog" on the right could be easily shielded by clouds at the lower levels (e.g. medium clouds).  Hence, only the "sun dog" on the left could be seen but not the one on the right. Beyond the camera lens to the right of Mr. Lee's photo (Fig. 2), there were many high-rise buildings over the Kowloon Peninsula that could have blocked the view.  As such, the presence of a "sun dog" to the right was difficult to ascertain. At the airport, the observing point was higher and the view much wider.  Clouds also appeared to be more evenly distributed there (Fig. 3).  A symmetric appearance of "sun dogs" to the left and right of the sun was therefore readily observed.

In fact, the satellite image (Fig. 4) also suggested that clouds south of the Guangdong coast were generally thinner than those to the north.  With more sunlight penetrating through, the "sun dog" to the left (or south) of the sun was naturally more prominent than the one right (or north) of the sun.

This is an excellent example illustrating how things observed at different positions may not appear exactly the same, and things not observed do not necessarily preclude their existence.  It is only through a comprehensive analysis from different perspectives that the real situation can be more fully understood and revealed.