Images offered by a citizen in connection with his enquiry of a special atmospheric optical phenomenon. 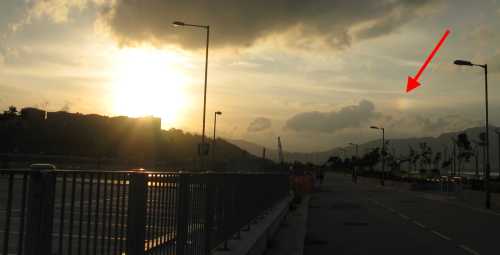 What special features are there in the photos?

The photos (Fig.1 and Fig.2) were taken in Tolo Harbour with the camera facing the west before sunset in the evening of 2 July 2009. The photos indicate the sun and a colourful light source at approximately the same elevation. There was a bright colour spot appearing on the right of the sun.  The side of the bright spot nearer to the sun is reddish whereas the other side of the bright spot (farther away from the sun) is whitish with a slightly blue colour. 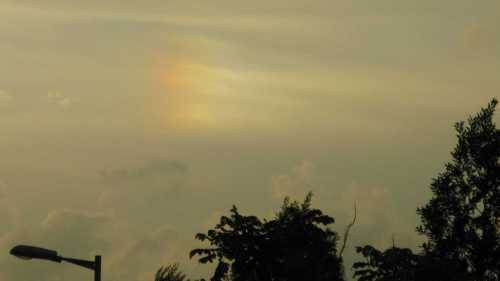 What is "sun dog"? Why is the phenomenon shown in the photos "sun dog"?

Sun dog is produced by refraction of sun's light rays through hexagonal ice crystals of cirrus clouds when the sun is at low elevation angle close to the horizon during sunrise or sunset.  The phenomenon can be seen when there is no lower clouds blocking the view. Sun dogs are luminous or bright spots appearing at approximately 22 degrees to the right and left of the sun at the same altitude in the sky. Its occurrence depends on the density, thickness and altitude of the cirrus clouds as well as the observer's location. A sun dog has a short whitish horizontal luminous band or tail extending outward. Its colour appears more or less reddish on the side towards the sun and bluish on the other side away from the sun.

Before the sunset at dusk on 2 July 2009, Hong Kong was covered by high clouds. As the clouds were thin, sunlight could still penetrate the clouds. There was no significant radar echo (Fig. 3) and thus no rain around the neighbouring areas. The surface weather observations (Fig. 4) and satellite picture (Fig. 6) showed that high clouds existed generally in local and neighbouring areas. 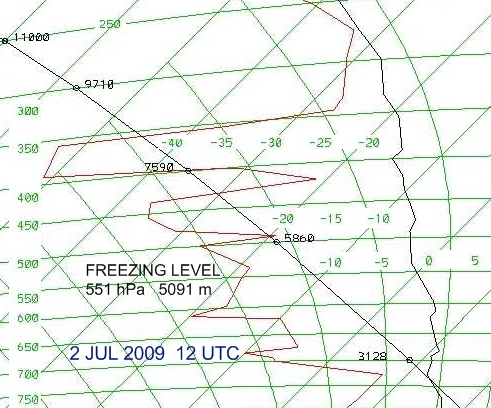 The upper-air sounding (Fig. 5) at 8pm on July 2 of 2009 indicated that the atmosphere was relative dry below 350hPa (about 8600m) level. On the other hand, the atmosphere was relatively moist with temperature below -20oC above 350hPa. Hence, clouds above this level were rich of ice crystals. Therefore, the colourful bright spot was probably caused by the refraction of sunlight through the randomly oriented ice crystals, thus producing the phenomenon of "sun dog".

Is it possible for the "sun dog" to appear only on one side of the sun?

The satellite picture (Fig. 6) shows the high clouds in the vicinity of Hong Kong. The distribution of clouds in the north and south of the coast is not well symmetrical. The amount, symmetry and uniformity of the high cloud distribution would have effects on the "sun dog" phenomenon causing the image indistinct or indiscernible. For example, a fragmented single "sun dog" could appear in cirrus clouds originated from the remaining condensation trails produced by successive jet aircrafts flying along nearby routes across the sky at very high altitude during sunset. Alternatively, patches of lower clouds could also hide the "sun dog" on one side of the sun from the observer's view. As such, intact "sun dogs" might not appear clearly and simultaneously on both sides of the sun in some occasions. 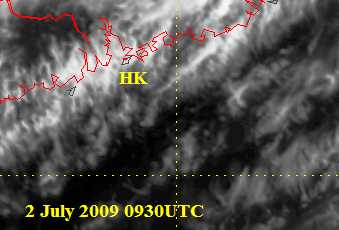 Why does a "sun dog" appear reddish on the side closer to the sun with an extended whitish tail in slightly blue colour on the other side away from the sun?

The whitish tail is a short horizontal extension of the bright light from sun dog. It is because the wavelength of reddish light and bluish light is slightly different. After the sun light is refracted through the randomly oriented ice crystals, the light rays of different colours emerging with slightly different deviation angle. These light rays after refraction will overlap with their light paths displaced slightly producing the optical phenomenon (Fig. 7).

Furthermore, the colour produced in sun dogs is more complicated than that of rainbow because ice crystal is birefringent for light in nature. When a light ray passes through a piece of birefringent transparent material, the light ray will be divided into two separate components propagating in two different directions (Fig. 9). Thus, an object being viewed through a birefringent material would have two separate images nearby with partial overlapping (Fig. 10). If the white light passing through a birefringent material has two spectra, the two spectra will partially overlap and combine to form to an extraordinary spectrum (Fig. 11).

Fig. 11  Spectrum A and spectrum B partially overlap to produce spectrum "A+B"

(Spectra in the diagram are exaggerated for ease of explanation.)

Why do sun dogs appear in a position of about 22 degrees to both sides of the sun?

It is because the formation of sun dog requires sunlight to be refracted by horizontal oriented hexagonal ice crystals (Fig.12). The physical property (refractive index) of hexagonal ice crystals limits the sunlight passing through it to deviate at not less than an "angle of minimum deviation" of about 22 degrees (Fig.13). The light around 22 degrees is mostly converged and most intense to form the bright spot. 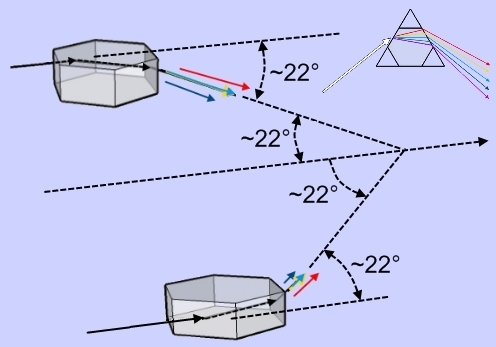 Why is the side of the sun dog farther away from the sun not seen to be reddish?

The visual angle controls our perception of observing the relative distance or positions of different objects. We can see the light only when the light propagates at the correct angle to enter our eyes. As light comes from numerous ice crystals, the net effect is that the eye sees the reddish colour on the inner side of the right sun dog (as shown in Fig.14).