When people started to use ships for sailing, they occasionally observed mysterious glowing balls of blue or violet light on the ships at sea, as if the ship was caught by fire. This glowing light was believed to be revelation of spirits and would bring good luck. It was referred to as "St. Elmo's Fire", named after Saint Elmo who was the patron saint of sailors in the 3rd Century. The sailors believed that when the St. Elmo's Fire appeared, the patron saint was present to protect them. In Chinese culture, the same phenomenon is called "Fire of Mazu", the goddess who guards the seas.

Actually, the St. Elmo's Fire is not a real fire. It is a weather phenomenon that occurs in strong electrical condition in the atmosphere, usually in the presence of thunderstorms, or volcanic eruption nearby. The charges in the cloud induces charges on surface objects and the ground, resulting in a high voltage between the ground surface and the cloud base. The established voltage is particularly intense when the surface object has a large curvature like a ship mast. This is sometimes called the sharp point effect (see "Don't be a lightning rod"). When the voltage is high enough, the air molecules surrounding the object are ionized to form a region of plasma. As the plasma discharges, the energy is released in the form of glowing light. The colour of the glow is usually violet or blue due to abundance of nitrogen and oxygen in the air. The appearance of the glow resembles a flame.

Apart from ships, wing tips and nose cones of in-flight aircrafts are also common platforms for the St. Elmo's Fire to occur. The image in Figure 1 shows the St. Elmo's Fire as seen from the cockpit of an aircraft flying in close proximity to thunderstorms. Although St. Elmo's Fire might look a bit scary, it is generally harmless, and without scorching heat. The main hazards to aircrafts are brought by atmospheric conditions such as thunderstorms or volcanic ashes which initiate the St. Elmo’s Fire (see "Roadblocks in the Sky Convective Weather Impact on Aircraft" and "Monitoring of Volcanic Ash"). Nonetheless, if the magnetic field generated by the electrical current in the plasma is strong enough, temporary interruption to on-board instruments is possible, probably resulting in unreliable measurements or failure in radio transmissions. 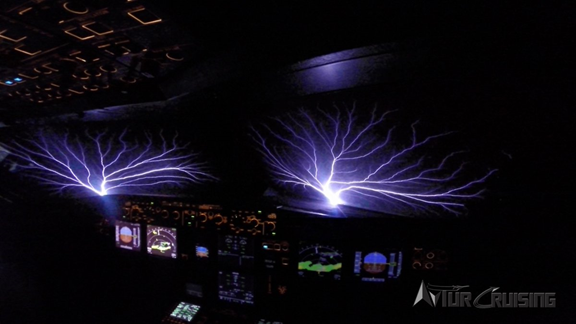 To ensure aircraft safety, the Airport Meteorological Office of the Hong Kong Observatory issues Significant Weather Information (SIGMET) and significant weather charts to warn flights within the Hong Kong Flight Information Region from getting close to hazardous regions such as thunderstorms and volcanic ash.