The Grimsvotn volcano in Iceland erupted in late May 2011, flinging large amount of volcanic ash into the air. Reminiscent of the volcanic eruption of Eyjafjallajokull volcano in April to May last year, there was a fear that the volcanic ash might spread widely, leading to complete paralysis of the air traffic in Europe again with most of the flights grounded and a large amount of passengers stranded.

Volcanic ash is mostly glass shards and pulverized rock. It is very abrasive. When an aircraft flies over clouds embedded with dense volcanic ash, the ash will be fused onto the turbine and other parts of the aircraft engines. The glass shards will be melted to form a coating. As a result, the air flow will be affected and the engines would be overheated, and might lead to engine flame-out. On 24 June 1982, a British Airways B747 passenger aircraft encountered volcanic ash aloft of Indonesia during its way from Kuala Lumpur, Malaysia to Perth, Australia. All 4 engines lost power one by one and the aircraft descended rapidly from 37000 ft to 12000 ft. Luckily, three of the engines could restart at this point and the aircraft made a successful emergency landing at Jakarta, Indonesia.

To safeguard aviation safety, International Civil Aviation Organization (ICAO) has established an International Airways Volcano Watch (IAVW) system. It consists of nine Volcanic Ash Advisory Centres (VAACs). Each centre is responsible for monitoring the occurrence of volcanic ash within its designated region, forecasting the dispersion of the volcanic ash, and disseminating the relevant information. Apart from making use of the information issued by the VAACs, the Hong Kong Observatory also makes use of satellite for the monitoring of volcanic ash.

Figure 1 is a true colour image composed from MODIS (Moderate Resolution Imaging Spectroradiometer) data collected on 23 May 2011 on broad of Aqua, a polar-orbiting satellite operated by the National Aeronautics and Space Administration (NASA). Volcanic ash plume is brownish yellow in colour on the image. Clouds are in different shades of white to light grey. The image showed that volcanic ash from Grimsvotn volcano was spreading south from Iceland, drifting towards the northern part of the United Kingdom . To facilitate forecaster in the monitoring of volcanic ash, the Observatory has developed a number of satellite imagery products. Areas with volcanic ash, sand and dust are highlighted in special colours in the products. Figure 2 is a satellite image derived from MODIS infra-red channel data for sand, dust and ash monitoring. Areas with volcanic ash are shown in yellow to red.

Since polar-orbiting satellites only pass over the same area twice a day, in order to heighten the monitoring, the Observatory also uses data from geostationary meteorological satellites. Figure 3 is a satellite imagery product for monitoring sand, dust and ash derived from the MTSAT geostationary meteorological satellite data operated by the Japanese Meteorological Agency. The elliptical area encircled in red shows spreading of volcanic ash from Shinmoedake volcano eruption in Kyushu, Japan on 26 January this year. In addition to monitoring volcanic ash, this type of image can also assist forecasters in identifying areas with sand or dust. Those who are interested can find the images on the Observatory's "Sand and Dust Weather Information" web page.

When there are indications that the airspace of Hong Kong may be affected by volcanic ash, the Observatory will provide warnings and related information to the Civil Aviation Department and all aviation users according to the ICAO's regulations. This will facilitate airlines and pilots in planning their flight routes to minimize the impact of volcanic ash and to safeguard flight safety. 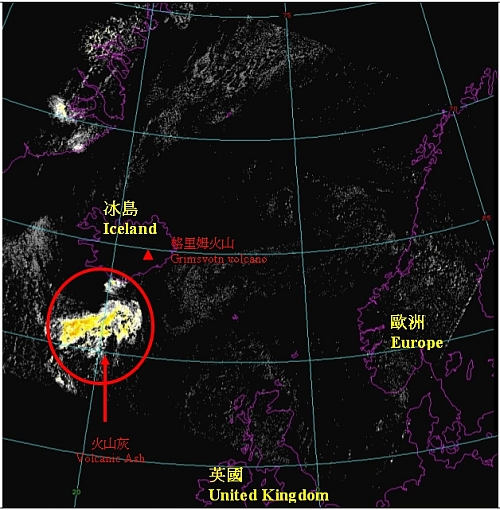