Don't be a Lightning Rod

Don't be a Lightning Rod

The ice crystals inside a cumulonimbus cloud will collide with each other under vigorous turbulent flow and become electrically charged.  In general, the upper portion of the cloud is positively charged, while the middle and the lower parts are negatively charged.  The earth's surface beneath the cumulonimbus cloud will then be induced with positive charges.  When the electric voltage between the positive and negative charges rises to a certain extent, discharge will take place between clouds or between cloud and the earth's surface.  This is how lightning occurs.

The distribution of electrical charges on the earth's surface depends on its topography.  More charges will be accumulated on a curved surface than a flat plain (see figure 1).  A tall building itself will be of the highest curvature on the ground.  When a cumulonimbus cloud gets close, more charges will be induced and accumulated on the building, increasing the chance of discharge.  Hence, lightning will tend to strike tall building.

The same principle applies to the operation of a lightning rod, which is a metallic rod installed on the rooftop of a building with its bottom extending below the ground.  In thunderstorm situations, the lightning rod will attract nearby lightning and lead the electric current into the earth, hence protecting the building against lightning strokes.

When thunderstorms occur, do not be a lightning rod.  Do not stand in exposed areas, or under tall trees or poles, to avoid becoming a lightning rod that attracts lightning strikes. 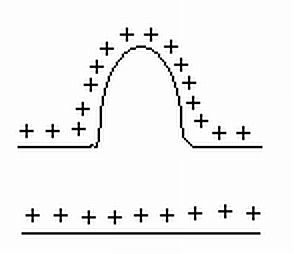