Tropical cyclone warning is one of the earliest weather warnings in Hong Kong and East Asia. The "typhoon warning" system was first introduced in Hong Kong in 1884, one year after the establishment of the Hong Kong Observatory. Over the years, there were several rounds of changes on the tropical cyclone warning system in Hong Kong. The latest change was in 1973 in which signals 5 to 8 were replaced by 8 NW, 8 SW, 8 NE and 8 SE respectively, leading to the current 1-3-8-9-10 scheme[1]. Among these five signals, the Hurricane Signal No. 10 is certainly the most exciting and the rarest. Records since 1947 reveal that 12 typhoons necessitated the issuance of the Signal No. 10 in the past 65 years (1947-2011), on average about one in every 5 to 6 years.

Two most devastating storms in the past century in Hong Kong occurred in 1906 and 1937. Some 15 000 and 11 000 lives were lost respectively. Destructive storm surges were responsible for the heavy causalities in these two typhoon events. After the Second World War, Typhoon Wanda, which killed 183 people in 1962, claimed the first place in the hierarchy of deadliest typhoons in Hong Kong[2]. To brave the storms, Hong Kong has over the years developed an effective warning system, and set up stringent building codes to protect the community. The implementation of various disaster prevention and mitigation measures has led to a steady decrease in the number of deaths/missing associated with tropical cyclones in the past 50 years. 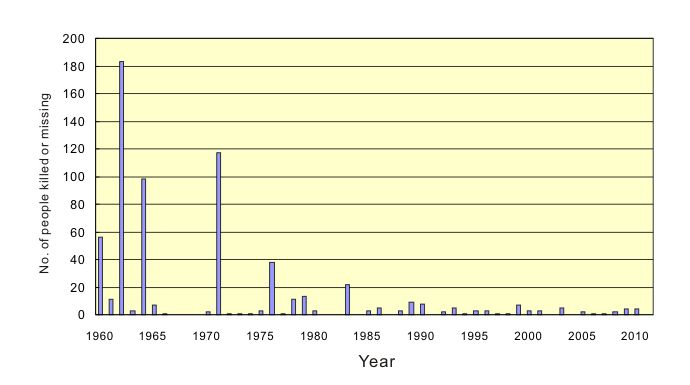 Lives claimed (death or missing) by tropical cyclones in Hong Kong from 1960 to 2011. As mentioned in our previous blog article[3], the tropical cyclone activity in the South China Sea was in a relatively quiet phase during the last two decades. The frequency of Signal No. 10 has decreased since the 1980s. The Hurricane Signal was issued only twice in the last three decades in 1983 (Ellen)[4] and 1999 (York)[5].

Although the Hurricane Signal No. 10 has not been issued for over a decade in Hong Kong now, it does not imply that the frequency of occurrence of such an event will not return to the long-term average of about one in every 5 to 6 years in the near future. Moreover, the recent disastrous tropical cyclone events in Taiwan, Japan and the Philippines triggered respectively by Typhoon Morakot (2009)[6], Typhoon Talas (2011)[7] and Tropical Storm Washi (2011)[8] have clearly showed us the potential hazard of tropical cyclones to the coastal regions.

"Are we ready for the next Hurricane Signal No. 10?" This is the question we should ask ourselves prior to every typhoon season each year.