This blog title may sound a bit peculiar to many people. "5-6" is certainly not a new name of tropical cyclone in the western North Pacific. In fact, 5 and 6 are the two most frequently occurred numbers of tropical cyclones affecting Hong Kong[Note] each year, based on the statistics in the past five decades (See Figure 1). 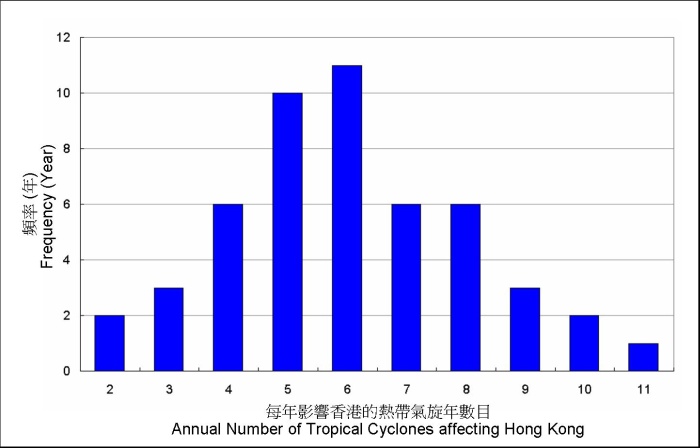 The decrease in the 30-year averages in the last few decades is an interesting subject to look into. The inter-annual and inter-decadal variations in tropical cyclone frequency in the western North Pacific are likely related to a number of factors which affect the sea surface temperature and atmospheric circulations in the region. These factors include the El Niño and La Niña as well as the Pacific Decadal Oscillation[1-2] which may have effects for periods of several years to decades. Moreover, some recent research suggested that the long term sea surface temperature rise due to human-induced climate change[3] could also affect the tropical cyclone frequency, intensity and movement. Since the causes of the variations in the tropical cyclone frequency in the western North Pacific and the South China Sea are rather complex and may comprise both natural and human-induced influences, more studies are still required to further understand the relative contributions of natural variations (e.g. El Niño and La Niña) and human-induced factors to the past and future changes in tropical cyclone activity in the region.

Figure 2Annual number of tropical cyclones (including tropical depressions) crossing
within 500 km of Hong Kong during 1961 to 2010.

In view of the presence of significant inter-decadal or even multi-decadal fluctuations in tropical cyclone activity in our region, the 30-year average of tropical cyclone counts may exhibit noticeable changes from one period to the other. Therefore, in depicting the norm for the annual number of tropical cyclone affecting Hong Kong, it may be more appropriate to refer to the long term average of 1961-2010 which is about 6 in a year.