Did you head north for a cold white Chinese New Year holiday as the January temperature in Hong Kong was warmer than normal? Indeed the chance of seeing snow in Hong Kong was very slim. But last year (2016), if you would still remember, under an intense cold surge, even though there was no snow in Hong Kong, we experienced an even rarer form of winter precipitation - ice pellets

However, temperature does not always decrease with increasing height. If there is a layer of warmer air in between the cold layers as in Figure 1, what happens? Snowflakes may first melt into raindrops in the warm layer, then the raindrops may condense once again, this time into ice pellets in the freezing layer below. Unlike snow that falls gently, ice pellets, being harder, will bounce up and down when they hit the ground or tough objects.

On 24 January 2016, an intense cold surge brought very cold weather to Hong Kong. Ice pellets, being such a rare wintry precipitation, was first ever observed at the Hong Kong International Airport (HKIA) that afternoon. There were also reports of ice pellets and widespread icing on high grounds. Figure 2 shows ice pellets and icing observed near Tai Mo Shan Radar Station on that day. The tephigram in figure 3 depicted the vertical structure of the atmosphere in the morning of 24 January. The black and red lines show respectively the changes in air and dew point temperatures with height. One could see two cold layers (marked in blue) separated by a warmer layer (indicated by orange) at the lower part of the atmosphere, exactly what one would expect ice pellets to form.

During the processing of ice pellet formation, water droplets melted from snow but yet to condense remain in the air aloft. These droplets, when in touch with cold objects, form ice and stick to them. This phenomenon, known as icing in aviation, can be dangerous to flying aircraft. Indeed on that day, a helicopter of the Government Flying Service had to suspend its rescue mission to go to Shek Kong for ice removal, and the Airport Meteorological Office also received several flights reporting icing.

"Behind beauty lurks danger" applies particularly well for many weather phenomena. We must pay attention to safety when appreciating their wonders. For more information on wintry precipitation, please visit the Hong Kong Observatory's Blog and Education Resources. 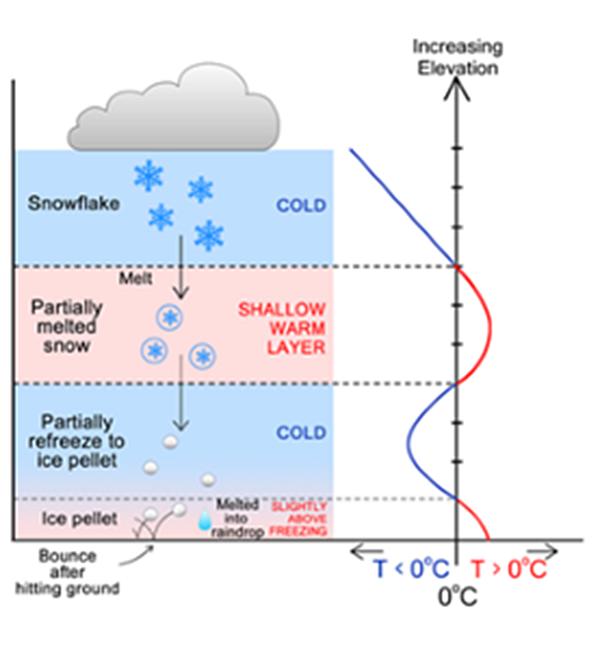 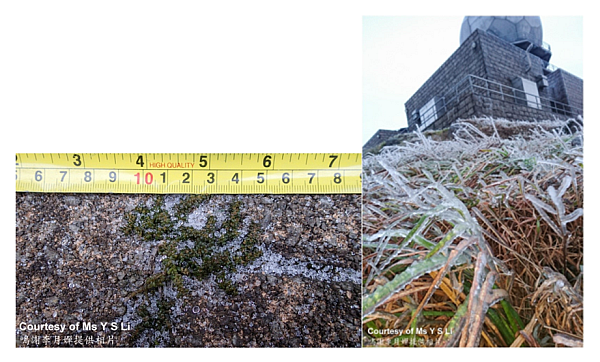 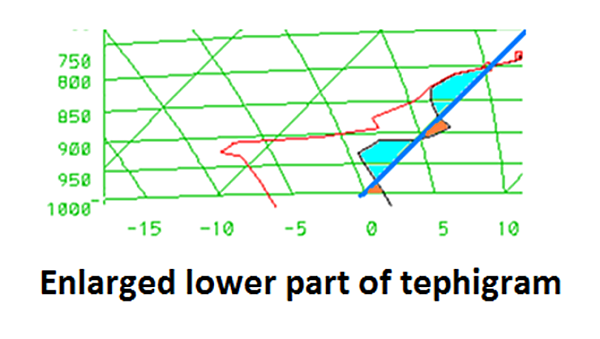