What are the differences between various types of winter precipitation?

In late January 2016, an intense cold surge swept across southern China, bringing bitterly cold weather to Hong Kong. The minimum temperature at the Observatory on 24 January was only 3.1 degrees, the lowest record since 1957. Very rare phenomena of icing and freezing rain with ice pellets also occurred in Hong Kong that day, attracted a lot of interest from the media and the public, especially on different types of winter precipitation. There were quite some discussions on "mix of rain and ice pellets" and "mix of rain and snow" (both being referred to as "sleet" in English). In this blog, we try to explain the differences between various types of winter precipitation and the choice of terminology.

As discussed in previous blog articles on winter phenomena[1, 2], the winter precipitation mentioned above are very rare in Hong Kong. Nevertheless, most of the precipitation seen in winter starts out as snowflakes in the clouds high up in the sky, it is the variation in the temperatures all the way from the upper atmosphere to the ground that determines what type of precipitation reaching the ground, be it in the form of liquid, solid, or a mix of them. Different types of winter precipitation and the typical temperature profiles favourable for their formation are described below.

Whether in winter or summer, rain is the most common type of precipitation in southern China. When the temperatures are above 0oC, i.e. freezing point of water, throughout most of the air column above the ground, all the snowflakes formed in clouds above the freezing level (the height where temperatures fall to 0oC) will be warmed and then melt while falling. They will completely change into raindrops before reaching the ground (Figure 1). 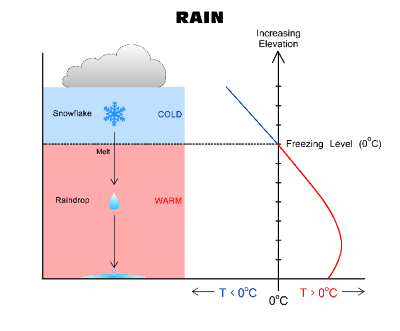 Snow is a type of solid precipitation formed from tiny ice crystals clinging together at temperatures well below freezing point to become snowflakes. For snow making its way to the ground, usually the layer of air from ground to where snowflakes are formed has to be at or below 0oC, so that snowflakes remain unmelted on their way down (Figure 2). However there are exceptional cases. If the ambient air near the ground is sufficiently dry, some partially melted or unmelted snowflakes can still reach the ground even though the air temperature near the ground is slightly above freezing point, resulting in snowfall[3]. Snow can also be classified into "dry" and "wet" according to the size and characteristics of snowflakes. As shown in Figure 3, snowflakes falling through dry air which is well below freezing temperature will be small and powdery. This type of snow is usually called "dry snow" which is suitable for snow sports. If the snowflakes fall through a layer which is close to or just above freezing point, the snowflakes will melt around the edges and stick together to form larger and heavier snowflakes which are commonly called "wet snow" and good for making snow balls or snow men[4] but more slippery to pedestrians. 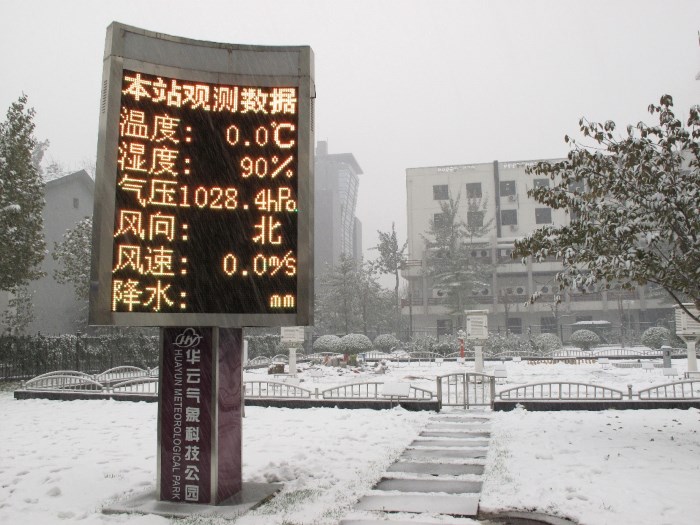 In English, "sleet" is a general weather term to describe a mix of solid and liquid precipitation, yet this term does not have any standard definition internationally. The solid precipitation in sleet comes in two distinct forms, namely ice pellets (Figure 4) and partially melted snow, as tabulated in Table 1. As the appearance and formation condition of ice pellets and partially melted snow are different (Figure 5), it may be more intuitive to describe the corresponding precipitation form directly to avoid misunderstanding, viz., "rain and ice pellets" or "rain and snow". 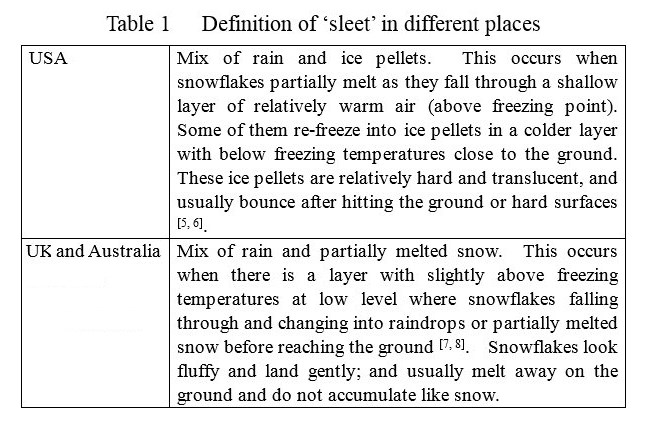 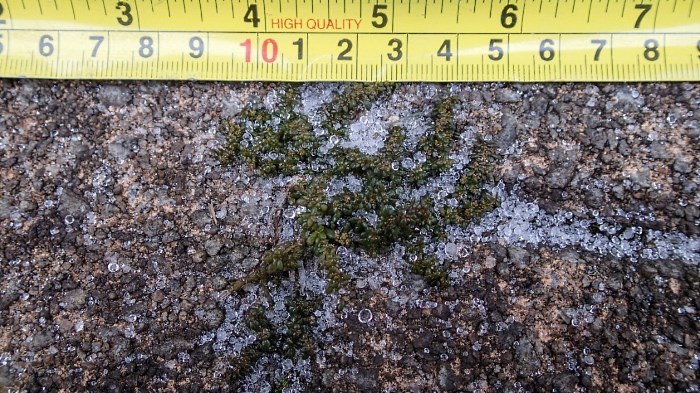 The vertical temperature profile which favours freezing rain is similar to that of ice pellets. However, the warm layer aloft is much deeper and the sub-freezing layer near the ground is much shallower (Figure 6). Firstly, snowflakes descend into the deep warmer layer and completely melt into raindrops. Then, raindrops fall through a shallow sub-freezing layer near the ground which is too shallow to allow the raindrops (freezing rain) to immediately refreeze. These super-cooled droplets instantly refreeze when they come into contact with cold objects, forming icicles or glaze of ice on the ground, trees, or power lines (Figure 7). Icy roads caused by freezing rain are dangerous to pedestrians and drivers (Figure 8), while the weight of accumulating ice may damage power lines and tree trunks. 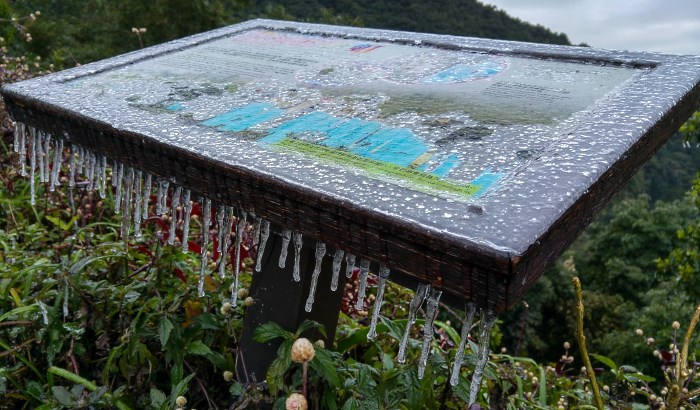 Global warning may continue to bring extreme weather. The occurrence of special winter precipitation in Hong Kong may attract members of the public to witness and take pictures of such events, however please beware of the potential dangers brought by such special phenomena, the very cold condition and slippery icy roads. The "Weather Information for Outdoor Photography Webpage" recently launched by the Observatory (http://www.hko.gov.hk/out_photo/outdoor_photo.htm) provides information of temperature, humidity, wind speed and wind direction in the lower atmosphere for the public to understand the weather conditions in different areas and on high ground and to be better prepared.

[3] The rate of snowflake melting as it falls
http://www.theweatherprediction.com/habyhints/208/

[4] UKMO, How is snow formed?
http://www.metoffice.gov.uk/learning/snow/how-is-snow-formed

[7] UKMO, What is sleet ?
http://www.metoffice.gov.uk/learning/learn-about-the-weather/weather-phenomena/what-is-precipitation/sleet