Fog can be generally divided into advection fog, radiation fog, mixing fog and upslope fog, etc, depending on its formation mechanism.  The first three types of fog have been introduced in "Fog Explained" and "More on Fog" in detail.  Here we talk about a fog which forms throughout the year – an upslope fog.  In the ancient times, it was named by Chinese as "shanlan" which means fog or mist in the mountain.

When winds blow towards a mountain, air will be lifted up along the mountain slope.  As the air temperature decreases with height, water vapour in the air will condense into small water droplets, forming fog over the mountain (Figure 1).  An upslope fog usually begins from the foot or middle of the mountain and covers a wider area.  It becomes sea of clouds when it accumulates over valleys (Figure 2).  Orographic cloud or cap cloud is more likely to form near the top of a peak.

An example of upslope fog occurs at Mount Emei of China.  Owing to the high altitude of Mount Emei, monsoon is blocked by the mountain and rich moisture rises along the mountain slope, forming fog by condensation.  Mount Emei is shrouded in fog almost all the year.  The average number of fog days is more than 300 days in a year.

On a sunny day, upslope fog will form over the mountains without any warnings.  This is because high grounds tend to heat up rapidly by strong sunshine during the day, resulting in an expansion of air and lower surface pressure over the region.  Air from foothill or regions with higher surface pressure will rise along the slope, forming upslope fog.  We will see clouds above us from the foothill and encounter fog going up the mountain slope.  Further up to the top of the peak and looking down, we will find a beautiful sea of clouds below. 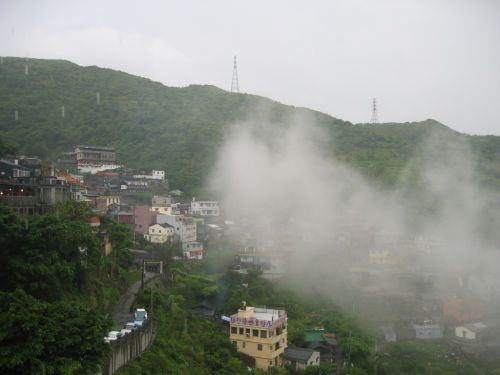