If the atmosphere is unstable with plenty of moisture, clouds like cumulus congestus and cumulonimbus may fill the sky; when it is stable and very dry, almost cloud-free conditions can be expected.  The former situation usually occurs in summer while the latter is mainly observed during winter.  What will occur if the atmospheric conditions are in between these two extremes?  Out of the many possibilities, the formation of cap cloud over hilltop is rather common in Hong Kong.

"Cap cloud", anchoring at hilltops, is of orographic origin. In Hong Kong, it belongs to "low cloud group" and its cloud base height is restricted to the lowest 1000m.  At this altitude, cap cloud is almost surely composed of small water droplets and is usually gray or white in colour.  It is most often in the shape of lentil pod, almond, convex lens, hat or UFO with very smooth feature.  Following the WMO cloud classification, "cap cloud" in Hong Kong could be classified as "stratocumulus lenticularis".

Figure 1 shows a cap cloud, covering the Lantau Peak on the morning of 10 November 2009. According to the Observatory's record, the weather was generally fine that morning with cloud amount of no more than 3 oktas i.e. less than three eighths of the sky dome being covered.  However, the prevailing southerly winds encountered the Lantau Peak and was forced to rise along the slope (see figure 2).  Condensation eventually occurred and the Peak was capped by a patch of smooth cloud within which the visibility was rather low. 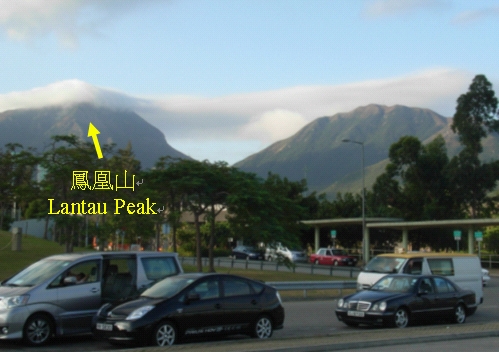 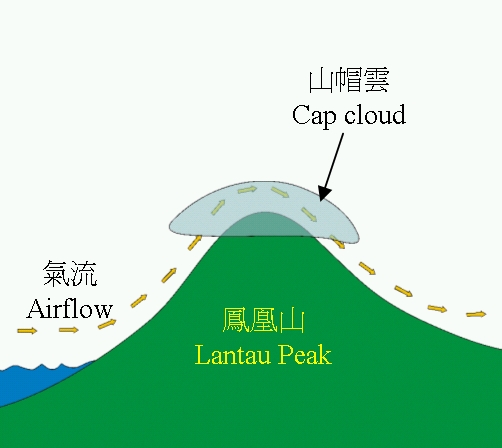