Entering the rainy season, Hong Kong people are no strangers to the sight of torrential rain. Depending on the intensity of the heavy rainfall, the Observatory will have to issue rainstorm warning and other warnings relating to heavy rain from time to time. But do you know why some torrential rains are more severe and longer-lasting than the others? Let us take a look at the favourable weather conditions for the development of rainstorms and some mechanisms that trigger rainstorms.

One of the main mechanisms that trigger heavy rain is strong convective activity in the atmosphere. As indicated by the grey line in Figure 1, there is an updraft that rushes upwards from the ground or the low level to the high level. If combined with the unstable atmospheric condition (i.e., hot below and cold above) and the abundant moisture transport at the low level, rain will occur. To put it simply, if heat and moisture are sufficient, then more intense and sustained convective activity will lead to more rainfall recorded on the ground. In spring and summer, it is not difficult to have the right atmospheric thermal and moisture conditions for rainstorm development along the South China coast including Hong Kong. On this premise and simplifying the discussion, the following will only focus on the dynamics of weather conditions that are favourable for the development of strong convections.

Figure 2. The impact of upper-air disturbances on atmospheric circulation. The blue curve represents the streamline of the westerly airflow, and its large southward perturbation is called the westerly trough, and the red dashed line indicates the axis of the trough. The wind speed in front of the trough axis (to the east) is relatively high, and the airflow is unstable and even a jet stream may be formed, which is favourable for the air below the area to rise upward. As for the area behind (west) the trough axis, normally there is a downdraft.

The converging airflow (i.e. convergence[2]) near the ground or at low level can force the air to rise. As for how high this "forced" upward air current can rise often depends on the supporting mechanisms at the mid to high levels. Upper-air disturbance[3] (refers to the large-scale perturbation of the airflow in the near horizontal direction in the mid to high-level atmosphere) is one of them, and the high-level divergence (i.e. the outward-flowing air) is the second. As depicted by the streamlines, the airflow of the disturbance is propagated like a wave, and the airflow ahead of the wave will rise, and the airflow on the rear side of the wave will sink (Figure 2). Since the atmosphere is a continuous fluid, when the upper airflow diffuses to the surroundings in a certain airspace, it will suck the lower level air upwards below the airspace to fill up the air "lost" due to high-level divergence. As shown in Figure 1, air can climb to the top of the atmosphere and form convections if the air near the ground or at low level is "forced" upward by convergence, mid-level disturbances, and high-level divergence. If these favourable atmospheric conditions continue for a long period of time, updrafts can intensify and support the development of rainstorms.

On cooler and drier days during autumn and winter, the above atmospheric conditions and triggering mechanisms are often difficult to occur at the same time, so there are significantly less extensive and continuous rainstorms. Having said that, this does not mean that there will be no heavy rain in autumn and winter. In addition, during days with light winds in early autumn, the intensity and impact of local showers and thunderstorms caused by the convergence of sea breeze and high temperature weather cannot be underestimated[7]. In any case, with climate change, Hong Kong will have fewer and fewer cold days. In recent years, rainstorm warnings have been issued in January and February during winter. We should never relax our awareness of rainstorms.

Figure 3. Analysis of streamlines and divergence at an altitude of about 12000 meters at 8 a.m. on 6 June 2020. In the airspace of Hong Kong and nearby, the black arrows indicate that the airflow is spreading in three directions, and the orange-red colour represents the strong divergence. The Observatory issued the Black Rainstorm Warning Signal that morning.

Figure 4. Streamline analysis at an altitude of about 5000 meters and satellite imagery at 8 a.m. on 5 January 2016. The red dotted line indicates the trough axis of the southern branch westerly trough, and a large area of perturbed airflow (often the wind speed is high, and the wind direction is swaying; in the black wind feather symbol, the more feathers or triangles appear, the higher the wind speed), ahead of the trough brought unstable condition to the atmosphere over the region and convective clouds appeared (bright white areas); on the contrary, there was a region of clear skies behind the trough. The Observatory issued the Amber Rainstorm Warning Signal that afternoon. 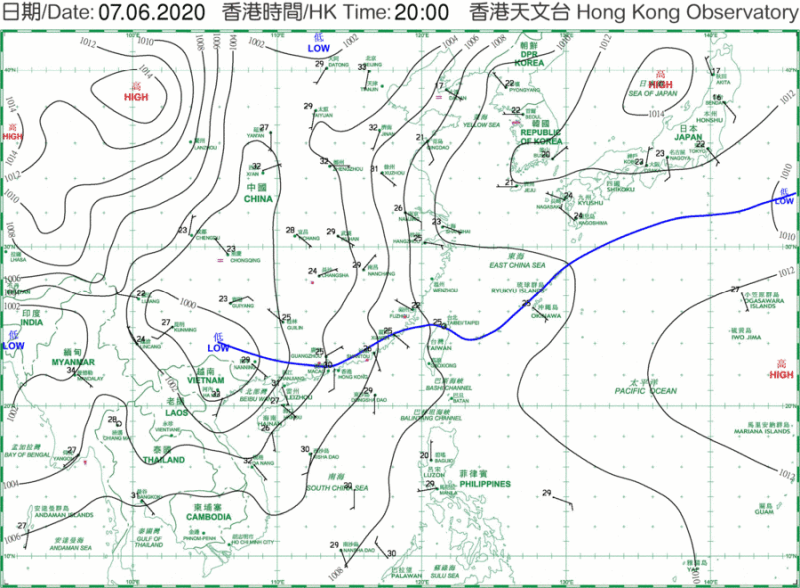 Figure 5. Surface weather chart on 7 June 2020 showing a Meiyu trough lingering along the coast of Guangdong. The Observatory issued the Red Rainstorm Warning Signal that morning.

Figure 6. Wind direction and wind speed recorded by automatic weather stations in Hong Kong at 2:30 a.m. on 6 June 2020. The red dotted line indicates the location of the convergent line of the southerly and northerly winds[8]. The Observatory issued the Black Rainstorm Warning Signal that morning. 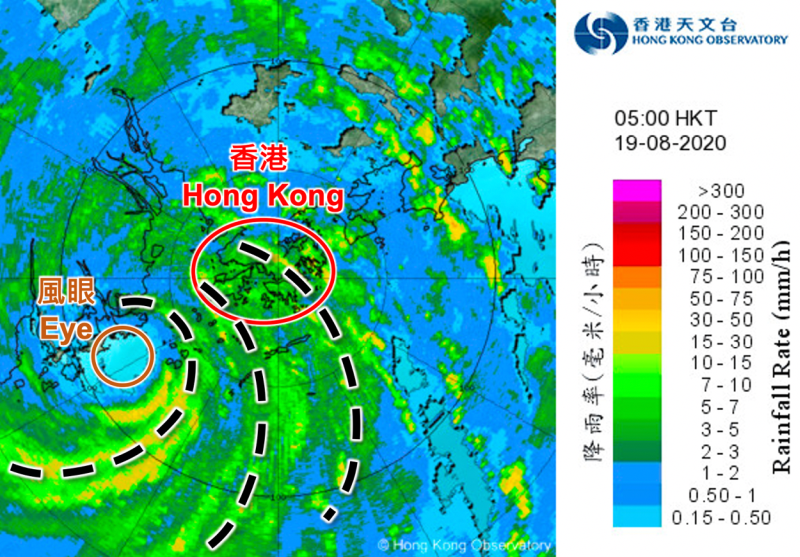 Figure 7. Radar image of Typhoon Higos on 19 August 2020. By tracking the rain areas in yellow (three of which are marked by black dashed lines), the rain bands that were more intense and closer to the eye appeared in spirals, implying that their associated wind field convergence areas were also in spirals, and curved towards the eye. The Observatory issued the Amber Rainstorm Warning Signal that morning.

Figure 8. The active Southwest Monsoon brought moist airstream (streamlines with a blue underlay) to the Indo-China, northern part of the South China Sea, southern China and a wide area of eastern China on 30 May 2020. There were heavy showers and thunderstorms over the coast of Guangdong. The Observatory issued the Red Rainstorm Warning Signal that morning.

Figure 9. Radar images on 5 September 2018 show that convective activities were triggered by high temperatures, which temporarily brought thunderstorms to the eastern part of Hong Kong in that afternoon. Sai Kung District recorded more than 30 mm of rainfall. Before the occurrence of thunderstorm, the winds were light over the territory and temperatures generally rose above 33 degrees.