What is upper-air disturbance?

What is upper-air disturbance?

The term "upper-air disturbance" appears occasionally in the Observatory's weather forecast. Do you know what kind of weather system it refers to and how it affects our weather?

First of all, we all know that air on the Earth does not stay still but flows continuously. The speed of air flow is uneven and the flow direction also changes with time and location. An upper-air disturbance refers to where the direction of the airflow in the upper atmosphere experiences significant changes in the flow direction.

As the air mass near the Equator of the Earth is heated, it expands and rises, then flows towards the poles. Together with the effect of the Coriolis force due to the Earth's rotation which deflects the air mass to the right (left) in the Northern (Southern) Hemisphere, westerly winds generally prevail in the atmosphere over the mid-latitudes region (known as the Westerlies1), meaning that the airflow in the upper atmosphere generally flows from the west to the east. Sometimes, the airflow meanders. In the Northern Hemisphere, the region where the direction of the westerly winds turn left is called a trough, or a "westerly trough". Conversely, in a ridge or a "westerly ridge", the direction of the westerly winds turn right. 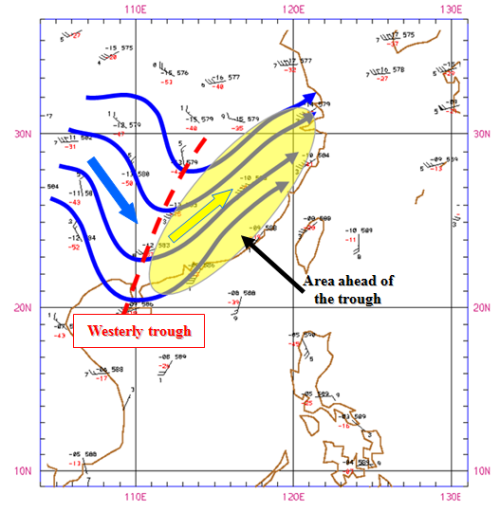 Figure 1 shows the observations at around 5 kilometres above the ground level at 8 a.m. on 21 November 2015. The axis of the westerly trough (indicated by the red dashed line) is where the direction of the airflow turns abruptly to the left (from the blue arrow to the yellow arrow). Southwesterly winds generally prevail ahead of the westerly trough (indicated by the yellow shading), and behind which are northwesterlies (indicated by the blue arrow). The combined visible and infrared satellite imagery (Figure 2), taken at the same time as Figure 1, showed that there was more moisture ahead of the westerly trough. Clouds over there appeared thicker, whilst those behind the trough were relatively thin. Generally speaking, the region ahead of a westerly trough favours ascending of air from the low levels. This results in a relatively unstable atmosphere over the region, conducive to the formation of clouds and rain, or even thunderstorms. On the other hand, air aloft descends behind the westerly trough, where the atmosphere is relatively stable, favouring the occurrence of fine weather. 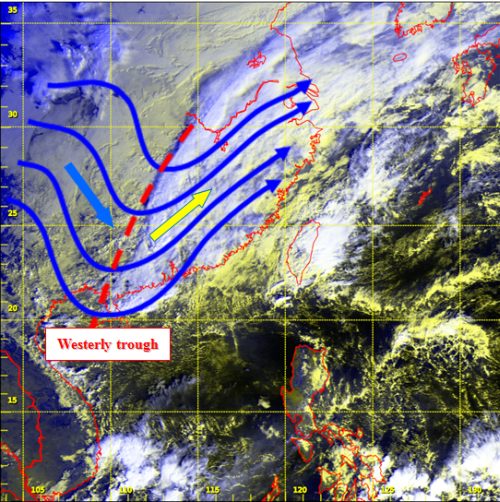 Owing to the affect of weather systems of different scales, the flow of air in the atmosphere can be very complicated. Upper-air disturbance sometimes also occurs in the easterlies over the lower latitudes region of the Earth (especially in the summer). Generally speaking, the presence of upper-air disturbance indicates a chance of unsettled weather nearby. Therefore, analysing upper-air disturbance and predicting how it evolves are very crucial to weather forecasting.