In 2014，we presented an article here on aircraft icing[1]. In that article, we also mentioned about a phenomenon called "Ice Crystal Icing" (ICI). In fact, what is ICI?

A commercial aircraft normally flies at an altitude of 30,000 feet or above except during the ascent and descent phases. At this altitude, the temperature is normally below minus 40 degrees Celsius. The moisture content in the air is very low and generally in the form of ice crystals. If an aircraft flies through an airspace with a high concentration of ice crystal, ice crystals will be sucked into the jet engine and melt on the warmer engine surface to form a thin layer of liquid water. This "sticky" layer facilitates the buildup of ice by trapping more ice crystals, affecting the operation of the jet engines. Even worse, when the ice sheds inside the engine, the engine may be damaged or encounter temporary power loss. This may affect aviation safety. In the field of aviation, this is known as "Ice Crystal Icing" (ICI) or "High Ice Water Content" (HIWC).

Where will high concentration of ice crystal occur?
There is ongoing research on the origin of HIWC. Mainstream hypothesis suggested that HIWC is associated with updraught inside strong convection. Water droplets freeze when they are carried by updraught from lower atmosphere to upper air where air temperatures are very low. When the updraught is strong, as is usually the case in tall cumulonimbus, the water droplets cool rapidly and some of the ice crystals formed can be very small in size. They are carried by the upper air wind to downwind locations. Thus the chance of having high ice water content is higher at the top of a tall cumulonimbus and its vicinity (Figure 1). 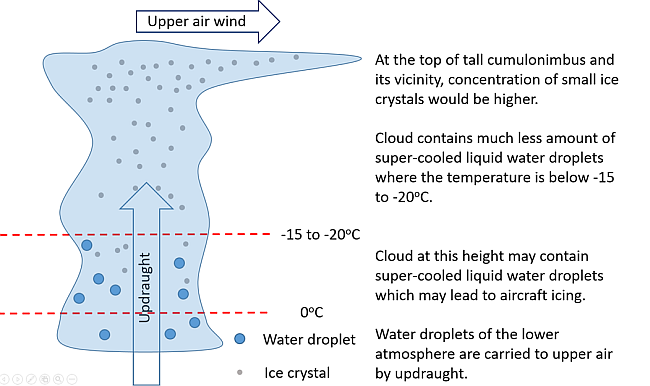 Does the pilot know where the HIWC area is?
Thunderstorm and strong convection are often associated with cumulonimbus. Pilots generally use the on-broad weather radar to monitor the distribution of cumulonimbus ahead of the flight and avoid flying through airspace with cumulonimbus However, the on-board radar is not very effective in detecting small ice crystals downwind of cumulonimbus, nor can the pilot notice the presence of high concentration of ice crystals visually, hence making the high ice water content phenomenon an invisible hazard to aircraft.

How to expose the "invisible"?
We currently use meteorological satellites to identify areas with high concentration of small ice crystals. By making use of the small differences in the optical property of small ice crystals and water droplets in different infrared bands, and through analysing multiple infrared channel signals received by meteorological satellite, we can identify areas of high ice water content (Figure 2). 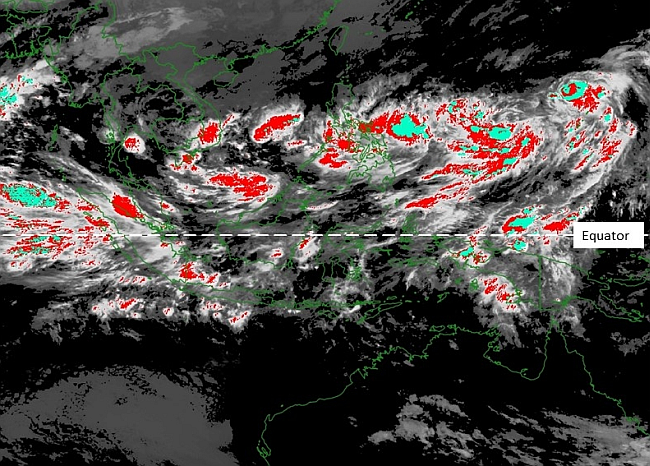 Figure 2   Areas with high ice water content (highlighted in cyan) identified by analysing different infrared channels of a meteorological satellite. As studies showed that formation of high concentration of small ice crystals is often related to strong convection, areas of deep convection (highlighted in red) are also displayed for reference by pilots and airline operators.