What is aircraft icing?

Aircraft icing, or simply icing, means ice forms and attaches to the body of the aircraft (Figure 1). Since Hong Kong is located in the sub-tropical region, the chance is very slim for ice to form on aircraft when parking on the ground. Hence, most of the aircraft icing reports received in Hong Kong occurred in-flight when the aircraft flied through cloud layers. At that time, the temperature of the airframe fell below freezing and the tiny super-cooled water droplets (water maintains its liquid form at sub-zero temperatures) in the cloud freezed into ice upon contact with the airframe. For civilian aircraft, in-flight icing normally occurs at the atmospheric layer where air temperature ranges between 0 to -20 degrees Celsius with ample moisture or super-cooled droplets. In the subtropical region like Hong Kong, the freezing height is normally located at 5 to 6 km aloft. As the humidity at those levels are usually not very high, aircraft icing is not common in the Hong Kong Flight Information Region. According to statistics, the Hong Kong Observatory received only one or two severe icing reports per year on average. The icing events were usually associated with winter monsoon or the passage of cold fronts. In recent years, the aviation industry becomes increasingly concerned about high altitude Ice Crystal Icing (ICI) which could potentially cause damage to the engine. ICI is usually associated with significant convections in summer seasons.

Why is icing an aviation hazard?

Icing is dangerous as the ice accumulated on the airframe not only increases the weight of the aircraft and wastes fuel, but also distorts the aerodynamic shape of the aircraft body, generating much bigger drag to flying. Figure 2 indicates that when there is ice formed on wings, increasing the angle of attack will lead to lift reduction, in contrary to a clean wing configuration. Both effects could make a safe and smooth flight to the destination difficult. Even worst, ice formed could break the antenna, interfering communication between pilots and ground control, or block sensors installed over the aircraft body, making them malfunctioning. The air accident report of Air France 447 in 2009 pointed out that it was likely that icing on the sensor had caused incorrect airspeed measurements and ultimately led the aircraft to fall into the Atlantic Ocean, killing all 228 onboard. For smaller aircraft such as helicopters and propellers, subzero temperatures can even block the fuel supply, causing total loss of engine power.

To cope with the potential icing threat, modern aircraft are built with anti-ice and de-ice systems. Special pipes circulating hot air from the engine to the airframe will prevent ice to form over there. In case ice has already formed, the hot air can melt the icing part in contact with the body so that the large sheet of ice can fall off. Furthermore, aircraft maintenance staff can spray anti-ice chemicals onto the aircraft body to prevent icing before takeoff.

As icing is a weather hazard to aviation, the Airport Meteorological Office of the Hong Kong Observatory will issue Significant Weather Information (SIGMET) whenever necessary, and mark specific labels on the Significant Weather Chart (Figure 3) to indicate areas of potential icing for pilots to make reference and better prepare for icing before takeoff. 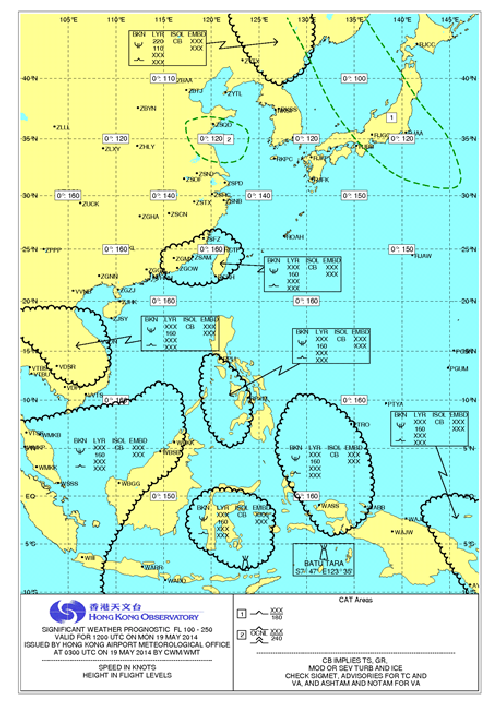 Figure 3 A sample Significant Weather Chart issued by the Airport Meteorological Office of the Hong Kong Observatory with regions of clouds with icing marked by curly lines. The severity of icing is indicated by different symbols shown in the inset (from top to bottom: light to severe icing).