The Physics of Lightning

The Physics of Lightning

Lightning is a severe weather phenomenon commonly seen in Hong Kong and could result in loss of lives and damage in properties.  Whenever lightning, and its associated thunderstorms, affects Hong Kong, the Observatory will issue a Thunderstorm Warning to alert people and relevant Government Departments to take suitable precautionary measures.

Lightning can occur when Hong Kong is affected by unstable weather systems, such as perturbations in airstreams, troughs of low pressure or tropical cyclones.  Lightning is an atmospheric electric discharge phenomenon.  The large electric current flowing through the atmosphere generates a huge amount of heat energy and strong flashes.  The energy also heats up the air.  Rapid air expansion results in strong shocks and generates loud bangs which are the thunders that often accompany lightning.

The electric discharge that results in lightning is generated by the enormous electric potential difference between clouds or clouds and the ground surface.  Very often lightning is associated with the cumulonimbus (Cb) clouds.  In situ measurement results indicated that potential differences within or between Cb clouds could reach 105V/m.  But how such huge potential differences can be accumulated between clouds or clouds and the ground?  The charge separation processes in the Cb is highly complicated with a number of mechanisms in action.  One of the mechanism accepted by most scientists is that precipitating  particles, e.g. water droplets, ice crystals and hail stones in the Cb are polarized by the prevailing nature electric field of the atmosphere[1] with positive charges moving to the lower part of these particles and negative charges to the upper.  The air movement inside a Cb is unstable and there are strong upward and downward drafts within the cloud.  Neutral particles in the updraft will collide with the precipitating particles while moving up.  Positive charges at the lower part of the latter, where impact will mostly happen, will be brought away and carried to the top of the cloud by the upward moving particles.  Thus the upper part of the Cb will become positively charged and the lower negatively charged.  Potential difference will build up between the cloud and the ground surface as negative charges accumulate at the bottom of a Cb, until it reaches a threshold at which electricity is discharged, resulting in lightning. (Figure 1) 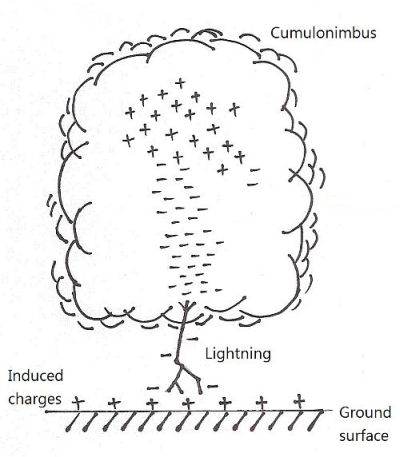