Thunderstorms occur mainly in spring and summer. They are characterized by flashes of lightning and rumbles of thunder.

When bolts of lightning suddenly flashed across the sky, followed by rumbles of thunder, thunderstorms are said to have occurred. In Hong Kong, thunderstorms occur mainly in spring and summer. 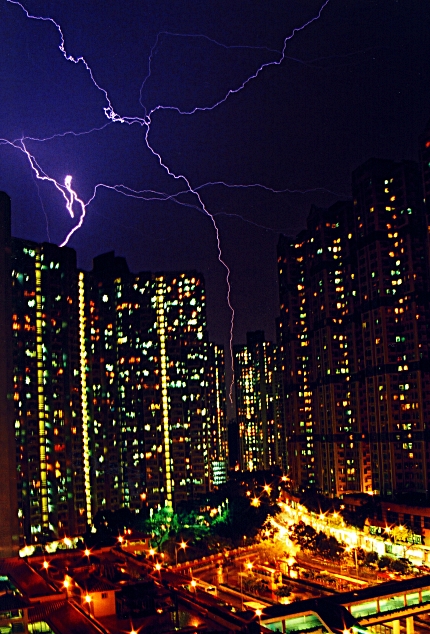 How do they form?

Thunderstorms are formed by the uplifting of warm and humid air. There are many factors that lead to the uplifting of air, for example, solar heating; in the vicinity of low pressure troughs; when two different air streams meet; or when air is forced uphill.

When humid air is lifted, it will be cooled and the moisture in the air will condense to form cloud. Upon further uplifting, the cloud will extend higher. Water droplets in the cloud continue to grow in size. As the cloud extends further upward, ice crystals may form because of low temperature there. A cumulonimbus cloud results when it grows to a height of 10 to 20 kilometres. Thunderstorms are produced by cumulonimbus clouds.

Development into a cumulonimbus cloud

Please click here to view pictures of development into a cumulonimbus cloud.

How are lightning and thunder produced?

Because it is very turbulent inside a cumulonimbus cloud, the water droplets and ice crystals in it will break up and become electrically charged. Generally speaking, the upper portion of the cloud is positively charged, while the middle and lower portions are negatively charged. When the electric voltage between the positive and negative charges is large enough, discharges take place between clouds or between cloud and the earth's surface, and lightning is said to have occurred. The electric current in a lightning discharge generates a large amount of heat. This causes a very rapid expansion of the local air, resulting in rumbles of thunder. 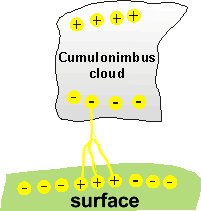 Distribution of positive and negative charges inside a cumulonimbus cloud

Thunderstorms are sometimes preceded or accompanied by heavy rain and squalls. These arise when the water droplets in the cumulonimbus cloud can no longer be supported by the underlying air and fall down as rain. The downward rushing air produces squalls.

How to estimate the distance of a thunderstorm?

Lightning and thunder practically occur at the same time. However, because light travels much faster than sound, people always see lightning before hearing thunder. The distance of the thunderstorm may be roughly estimated by the time difference between the flash and the thunder. As a rule of thumb, if the sound of thunder reaches an observer three seconds after a lightning flash, the thunderstorm is about 1 kilometre away.

What is the relationship between atmospheric stability and thunderstorms?

To put it simply, when the air is warmer than the surrounding, it will rise continuously. The situation is said to be unstable. An unstable atmosphere is favourable for the development of cumulonimbus and hence thunderstorms.

When the air is colder than the surrounding, it will sink. The situation is said to be stable. A stable atmosphere does not support air uplift and is unfavourable for thunderstorm development.

How often do thunderstorms occur in Hong Kong?

In Hong Kong, thunderstorms occur mainly in spring and summer. On average, thunderstorms are reported on about 5 days each month from April to September. 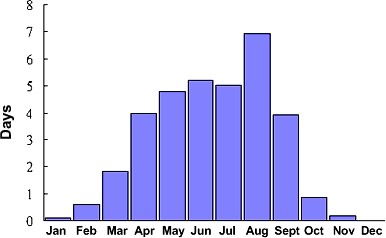 Average number of thunderstorm days in each month

How to forecast thunderstorms?

The weather forecaster at the Hong Kong Observatory makes use of radar pictures, satellite pictures, lightning location information and weather reports to monitor the development and movement of the thunderstorms. To forecast thunderstorms, he/she makes use of various forecasting aids including results from computer models and weather conditions aloft as measured with weather balloons. Please click here to view the "Thunderstorm Warning" service and points to note.