The coldest January since 1977 in Hong Kong

Owing to the frequent replenishments of the winter monsoon, the monthly mean temperature of 13.7 degrees for the first month of 2011 was 2.4 degrees below normal, making it the coldest January since 1977.

The freezing weather adversely affected the harvest of crops

At the beginning of 2011, unusual weather appears in many regions of the world. Unusually freezing cold weather affected China, Japan and Korea with record-breaking low temperatures. In addition, there were droughts in Russia as well as floods in Canada and Australia. These weather hazards brought about the underproduction of crops and in turn the rise of the price of wheat. These remind people of the following events.

Sunspots and the earth climate

.In 1801, British scientist, William Herschel, studied the change of number of sunspots during 1650 to 1800 and its effects. According to his analysis, rainfall became less when sunspots were sparse. So much so that sunspots determined indirectly the wheat prices in London. Hence, he attempted to correlate the yearly sunspot numbers and the prices of the grain. He proposed that an anti-correlation existed between the number of sunspots visible on the sun and the wheat prices. That was to say when there were little or no sunspots, the harvest of wheat was low and its price rose. In the contrary, when solar activity was active, the harvest of the grain was high and its price was low. He convinced himself that there might be a causal relationship between the sunspot cycle and the Earth's climate. This speculation matched with the improvement of agricultural production in the United Kingdom when the sunspot number rose during 1798 to 1804. Economists who were involved with the stock market followed up his study later on. They, however, found that the long-term results did not always show this anti-correlation.

Mike Lockwood is a professor of space environment physics at the University of Reading, UK. Professor Lockwood and his research team compared the levels of solar activity with the past 351-year temperature record in Central England. These data provided information that traced back to the beginning of the Maunder Minimum (see para. 5),

Mike Lockwood opined that solar activity seemed able to modulate blocking events. When the solar activity was low, blocking events became more stable. In the winter between 2009 and 2010, a prolonged blocking situation of distorted upper-air westerly jet stream caused the long spell of freezing weather in Europe. The possible effect of "blocking events" on the Earth's climate was discussed in a previous article in the "HKO e-Bulletin on Educational Resources" of Issue No.28 (December 2010).

Very few sunspots appeared in the period of "Maunder Minimum"

The period from 1645 to 1715 is often called the "Maunder Minimum" (Fig.1), when the solar activity was extremely inactive with only a few or even no sunspots for a long time. Europe experienced a series of severely cold winter in this period - the "Little Ice Age". "Little Ice Age" happened in the period approximately between 1550 (or perhaps as early as 1300) and 1850 A.D. During this period, it was generally colder than nowadays in Northern Hemisphere, especially in Europe. Since the temperature was relatively low, mountain glaciers advanced in many parts of the world. Some rivers froze and snow covered low altitude areas besides high mountains throughout the years.

Since there is a continuous cooling period of approximately half a year without sunshine on the Earth's north and south poles every year, a large amount of cold air accumulates near the polar regions. Figure 2 shows a blocking situation on the 500 hPa upper-air weather chart on 20 January 2011. The westerly jet was blocked and appeared in an unusually and extremely distorted form such that a large amount of extremely cold arctic air was guided to move southward, resulting in very cold weather in the vicinity. In the north, the regions affected by cold continental air-streams were cold and dry. When the cold air-stream met the moist air mass in the south, the weather could become snowy or freezing and extremely cold in some places. 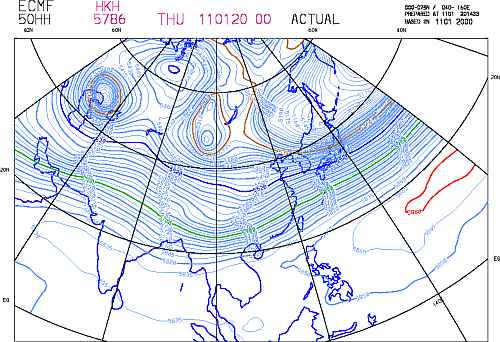 In the 24th solar cycle, will the warming trend of the earth slow down?

In 2001, a computer climate model of NASA (National Aeronautics and Space Administration of the United States) had reinforced a notion that existed for a long time. It indicated that low solar activity could have changed the atmospheric circulation in the Northern Hemisphere and triggered a "Little Ice Age" in several regions including North America and Europe during 1400s to 1700s.

Mike Lockwood also studied solar activities with data for over 9,000 years. Solar activity tended to increase quite slowly and took more than 300 years from low (quiescent) to high (active). However, solar activity often dropped rapidly to fall from high to low in a little more than 100 years. The present decline in solar activity started in 1985 (Fig.1) and is now about "half way to a Maunder Minimum condition". 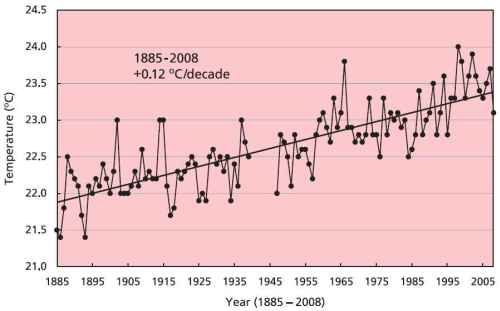 Fig.3  Annual mean temperature recorded at the Hong Kong Observatory Headquarters from 1885 to 2008 (Data during World War II from 1940 to 1946 is not available)

Also, unusually cold winters occurred occasionally in various regions of the world in the past few years. During this period, very few sunspots were observed as it was not far from the last solar minimum in 2008. The present sunspots in the 24th solar cycle are less than anticipated. Furthermore, NASA has recently predicted that the sunspot number would be much smaller than the sunspot numbers of previous several solar cycles (by comparing Fig.1 and Fig.4). If this situation persists, will the trend of global warming be slowed down in the 24th solar cycles? To provide a more complete and convincing answer, subsequent observations of sunspots and more research are crucial.

It must be pointed out that the cold winters discussed above refer to certain parts of the northern hemisphere.  For the Earth as a whole, the warming trend is unequivocal.  In fact, 2010 was the warmest year since instrumental record of temperature began more than 100 years ago.