Spectacular Fireworks Show on the Sun

Spectacular Fireworks Show on the Sun

Introduction to a space fireworks event

A single, unusual, transient but spectacular fireworks event on the Sun's surface was recorded by NASA's Solar Dynamics Observatory (SDO) on 7 June 2011. It was an eruption on the solar surface after the flash of a solar flare. This article is based on the information provided by the NASA Science News of 11 July 2011. 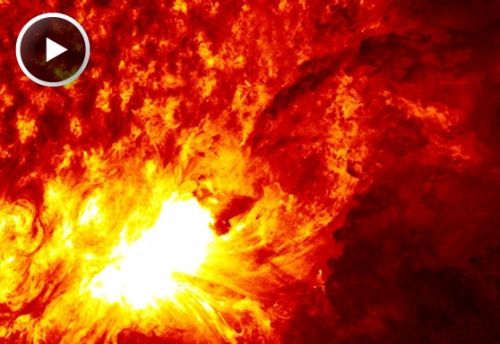 Fig.1  Video of the eruption showing dark blobs of plasma falling ballistically toward the surface of the Sun. (Source: Courtesy of NASA)

Why were the fireworks "dark"?

What caused the eruption?

The blast or solar flare was triggered by an unstable magnetic filament, loaded with relatively cool plasma drawn from regions below the Sun's surface. The energy stored in the magnetic filament was released when it broke. The large amount of energy released caused the explosion of plasma in spray of dark blobs and streamers.

What else could we see?

The plasma blobs were as big as planets, and many were larger than Earth. They rose and fell ballistically under the influence of the Sun's gravity. Since the plasma blobs consisted of charged particles and were "caught" by the Sun's magnetic fields, some of them were funnelled towards the vicinity of sunspot groups hundreds of thousands of kilometres away like guided missiles. The plasma blobs exploded like bombs when they hit the solar surface.

SDO also detected a shock wave originating from the blast site of the solar flare. It was like a solar tsunami propagating more than halfway across the sun, churning up magnetic filaments and loops en route.

Had the event caused any abnormal space weather to Earth?

The blast propelled a significant coronal mass ejection (CME) from the Sun. CME was essentially a magnetized cloud of ionized gas consisting of high speed energetic particles. Since its path of propagation had missed the Earth, there was no adverse space weather affecting the safety of astronauts or operation of artificial satellites, telecommunication systems and terrestrial power supply.