The accident at the Chernobyl Nuclear Power Station in 1986 was the most severe in the history of the nuclear industry, causing a significant release of radionuclides over large areas in Europe. We released a trilogy "Chernobyl: 20 Years On" and discussed the Incident, the Incident Consequence,Radiation Contamination and Lesson Learnt respectively in June, September and December 2006. Here, we will summarize the major findings and recommendations by the Chernobyl Forum.

What is Chernobyl Forum?

The Chernobyl Forum was established at the initiation of the International Atomic Energy Agency (IAEA) in February 2003. It aims to assess the environmental and health consequence of the Chernobyl accident, including the long-term effects both in the environment and in human health, and to advise governments on future actions, such as environmental remediation and special health care as well as research activities.

Who are the participants of the Chernobyl Forum?

The participants include IAEA and seven other United Nation Organizations including Food and Agriculture Organization (FAO), UN Office for the Coordination of Humanitarian Affairs (UN-OCHA), UN Development Programme (UNDP), UN Environment Programme (UNEP), UN Scientific Committee on the Effects of Atomic Radiation (UNSCEAR), the World Health Organization (WHO) and the World Bank, as well as the competent authorities of the three most affected countries i.e. Belarus, the Russian Federation and the Ukraine.

What are the major findings?

The Forum concluded that there was a dramatic increase in thyroid cancer incidence among those exposed at a young age and some increase of leukaemia and solid cancer in most exposed workers on site. However, there is no clearly demonstrated increase in the somatic diseases (i.e. biological diseases that occur on the exposed indivdual) due to radiation. Most of the emergency and recovery operation workers as well as residents of the contaminated areas only received relatively low whole body radiation dose comparable to natural background levels (see Incident Consequence for details on health consequence). Along with reduction over time of radiation levels and accumulation of consequences from humanitarian assistance (such as relocation of affected population), severe social and economic depression of the affected regions and associated psychological impacts have become the most significant problem in recent years. 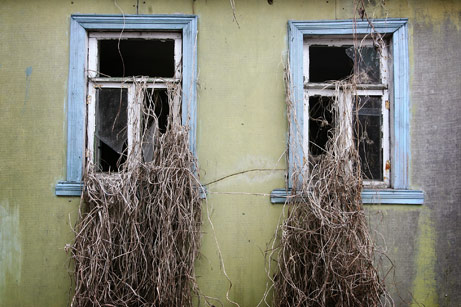 Wild vines creep through the windows of a deserted house near the shuttered Chernobyl Nuclear Power Plant. After the Chernobyl accident, more than 300,000 people were evacuated or relocated in the late 1980s.(Photo: National Geographic News, 2006)

Why did social and economic depression and psychological impacts become such a big problem?

Agriculture, the main source of income of the affected areas, was seriously affected by the Chernobyl accident and resulted in lower living standards, unemployment and increased poverty. The skilled, educated and young people were resettled to other areas, leaving behind an older population with limited skills for economic recovery. This was compounded by the economic depression in the 1990s following the break-up of the Soviet Union. At the same time, many resettled elsewhere were also traumatized by the relocation, the breakdown in social contacts, fear and anxiety about radiation effects.

What were the impact of Chernobyl incident on plants and animal?

There was increased mortality of coniferous plants, soil invertebrates and mammals, and reproductive losses in plants and animals in high radiation exposure areas up to a distance of 20-30 km. However, it is not all bad news. Outside that exclusion zone, no acute radiation-induced effects were reported. With reduction of exposure levels, biological populations in the exclusion zone were recovering, though the genetic effects of radiation were seen in both somatic and germ cells of plants and animals. Due to much decreased human activities, the exclusion zone has paradoxically become a unique shelter for biodiversity. 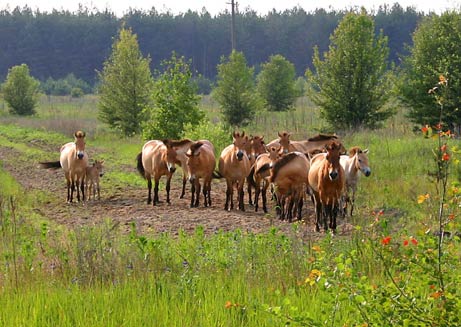 A herd of Przewalski's horses now roams Ukraine's Chernobyl "exclusion zone". These small horses were once found throughout the grassy plains of Mongolia, but hunting and habitat loss caused the species to go extinct in the wild.(Photo: National Geographic News, 2006)

The Forum noted that the governments took timely and adequate countermeasures to address the accident's consequences. However, the direction of current efforts should be changed to support more social and economic growth and integration of the affected Chernobyl population back into the mainstream society.