YEUNG Siu-wai
On 26 April 1986, an explosion occurred at the Chernobyl nuclear power station, in which large amount of radioactive materials were released, affecting Ukraine, Belarus, Russia and other places in Europe. This is the worst accident in the history of nuclear power industry and is still well remembered after twenty years. Public concern on the radiation and health impact in the aftermath of the accident remains high. Many international organizations including the International Atomic Energy Agency (IAEA), the United Nations Scientific Committee on the Effects of Atomic Radiation (UNSCEAR), and the Organization for Economic Co-operation and Development/Nuclear Energy Agency (OECD/NEA) have published reports on the event, death toll, radiation dose and impact on health and environment. Drawing on these reports, this column presents a brief account of the Chernobyl accident.

The damaged Unit 4 reactor in the Chernobyl accident (Source: The Chernobyl Forum)
Location of the Chernobyl nuclear power station and plant information
The Chernobyl nuclear power station is located in 130 km north of Kiev, the capital of Ukraine. It lies near Belarus beside the river Pripyat. At the time of the accident, the total population within 30-km radius of the power station was between 115,000 and 135,000. Of this total, about 49,000 of plant employees and their families inhibited in the town of Pripyat, which is about 3 km away from the reactor, and a population of about 12,500 in the town of Chernobyl, about 15 km to the south-east of the plant. 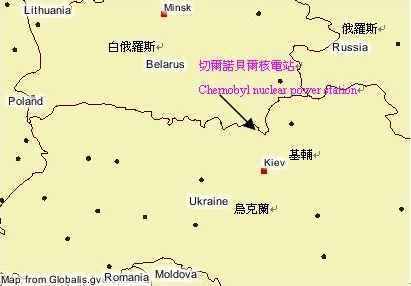 The site of the Chernobyl nuclear power station (Source: Globalis.gvu.unu.edu)
The nuclear station consisted of four graphite-moderated, light-water-cooled pressure tube reactors (RBMK-1000), each capable of producing 1000 megawatt (MW) of electric power. The four reactors together produced about 10% of Ukraine's electricity at the time of the accident. Construction of the plant began in the 1970's, with Unit 1 and 2 commissioned in 1977, followed by Unit 3 and 4 in 1983. Two more RBMK reactors were under construction at the site at the time of the accident, but the construction was halted after the accident.

The Chernobyl nuclear power station at a distance, viewed from the deserted town, Pripyat (Source: www.iaea.org- Revisiting Chernobyl's Lost City)
The RBMK-1000 reactor used in Chernobyl nuclear power station
The RBMK-1000 is a type of pressure tube reactor designed in the former Soviet Union, which uses ordinary boiling water as the coolant and graphite as the moderator.
Boiling water acts as a coolant and also provides the steam used to drive the turbines. The coolant system of the reactor consisted of two circuits. Water flows through the coolant circuit I to the fuel channels, where it is boiled by the uranium fuel inside the pressure tubes, producing steam to feed two 500 MW turbines via the coolant circuit II.
The graphite moderator is to slow down neutrons to make them more efficient in producing fission in the fuel. The graphite core of the reactor is about 7 m high and about 12 m in diameter, composing holes for 1661 fuel channels and 211 control rods. The power of the reactor is controlled by raising or lowering the control rods, which, when lowered, absorb neutrons and reduce the fission rate.
RBMK-1000 has potential safety hazards due to its design defects. At low power output, the reactor becomes unstable and is prone to sudden power surges. Three safety systems, including an emergency core cooling system, the requirement for a minimum operation at an electric power of 200 MW, and a minimal insertion of 30 control rods, are included in the operating procedures. 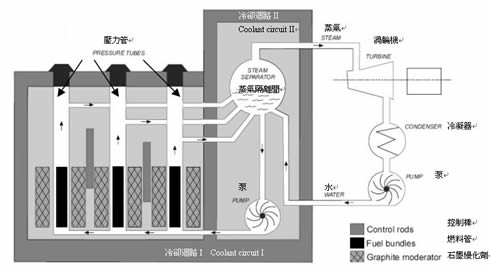 Graphite-moderated, light-water-cooled pressure tube reactor (RBMK-1000) (Source: OECD/NEA, 2002)
The Chernobyl accident
Unit 4 of the Chernobyl nuclear power plant was to be shutdown for routine maintenance on 25 April 1986. On that occasion, it was decided to test whether the residual capability of the turbine was enough to provide electrical power for the reactor core cooling system and emergency equipment during the shutdown of the reactor until the emergency power generator was fired up.
Unfortunately, this test was carried out without proper co-ordination between the operators and the plant safety personnel, resulting in inadequate safety precautions in the test. Moreover, the operators took a number of actions which bypassed some of the safety systems, causing a potential dangerous situation. This course of actions together with the design defects of the reactor led to loss of control of the reactor and subsequently the accident.
The reactor when operated at low power exhibited a sudden and uncontrollable power surge. Without emergency cooling and a sufficient number of control rods inserted, the power surge resulted in violent explosions and almost total destruction of the reactor. The consequences of this catastrophic event were further worsened by the fact that the graphite moderator and other materials caught fire. This contributed to a widespread and prolonged release of radioactive materials to the environment.
What other reactor types are used for commercial operation other than the RBMK-1000 used in the Chernobyl nuclear power station?
Over 440 nuclear reactor units are in service around the world. The major types of reactors in commercial operation include:
- Pressurised Water Reactor (PWR)
- Boiling Water Reactor (BWR)
- Pressurised Heavy Water Reactor (CANDU)
- Graphite-Moderated, Light-Water-Cooled Pressure Tube Reactor (RBMK)
More than 50% of the nuclear reactors in commercial operation are of the pressurized water type similar to those at Guangdong Nuclear Power Station and Lingao Nuclear Power Station, Daya Bay.
Will the Chernobyl-type accident occur at the Daya Bay nuclear power stations?
It is not possible for the Chernobyl-type accident to occur at the Daya Bay nuclear power stations, whose pressurized water reactors are of an entirely different design.
Comparison of the Daya Bay nuclear power stations and Chernobyl nuclear power station:
References:
[1] United Nations Scientific Committee on the Effects of Atomic Radiation （UNSCEAR）, Source, Effects and Risks of Ionizing Radiation, Annex D: Exposures from the Chernobyl Accident, 1998. （只提供英文版本）
[2] Nuclear Energy Agency, Organization for Economic Co-operation and Development （OECD/NEA）, Chernobyl: Assessment of Radiological and Health Impacts, 2002 Update of Chernobyl: Ten Years On, 2002. （只提供英文版本）
Related Articles
Previous Next