The occurrence of windshear aloft airport areas is one of the causes of aircraft accidents. Since the 1990s, windshear detection radars commonly known as Terminal Doppler Weather Radars (TDWR) had been installed in many modern airports providing windshear information and alerts to landing and departing aircrafts, enhancing aviation safety.

The strongest windshear over airport terminal areas is usually generated by microbursts associated with thunderstorm activities. In a mature thunderstorm, a local pool of intense cold air bursts downwards and outspreads near the ground. Abrupt change of wind direction and speeds caused by the advancing air alters the lifting force of aircraft and thus poses a threat to aircraft safety. For details of microbursts and windshear, readers may refer to the Observatory's pamphlet "Windshear and Turbulence"[1] and Thematic Article Series on "Educational Resources" webpages[2].

The mission of TDWR is detection of low-level windshear near the airport and is technologically more advanced than traditional weather radars which are used to monitor the development and movement of rain areas. Applying the principle of Doppler effect[3], a TDWR can measure radial winds from the radar. For aircraft landing and departing an airport, changes in the winds along runway direction may affect the lift of aircraft. Hence, a TDWR has to be placed along the direction of the runway in order to effectively monitor windshear near the airport. Locally for the Hong Kong International Airport, west of the two runways is the sea, so a TDWR has to be installed to the east of the runways, near Tai Lam Chung as shown in figure 1.

Microbursts are short-lived and usually last for a few minutes only. During thunderstorms, the TDWR has to conduct rapid scans in order to detect the rapid changes of air flow in the affected areas. Calculation must be fast and accurate, and run by the computer automatically so that windshear alerts can be issued to pilots in a timely manner. As such, the quality of radar signal must be very high. This requires a narrow radar beam, sophisticated software to eliminate clutters such as those from birds and terrain, high speed precision motors, and advance design to ensure high availability during thunderstorms.

Thunderstorms are common in Hong Kong and windshear caused by microbursts occur from time to time. As the growth of air traffic continues, TDWR will be guardian of the Hong Kong International Airport, ensuring the safety of passengers and aircrafts. 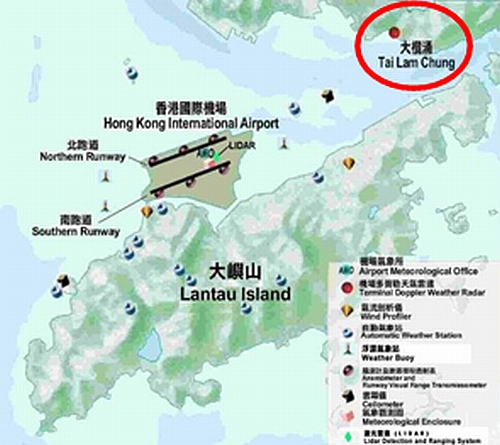 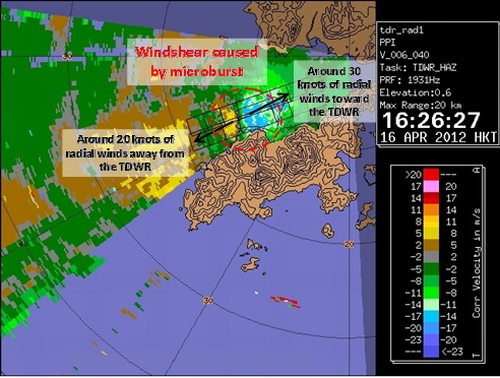 Figure 2: Image from the Tai Lam Chung Terminal Doppler Weather Radar on 16 April 2012, showing windshear caused by microburst with a change of headwind by about 50 knots.