Inversion Layer - Impose its own bounds

Inversion Layer - Impose its own bounds

In chapter 50 of Journey to the West, Sun Wukong wanted to leave his master, Tang Sanzang and go beg for food but was worried that demons nearby might harm the Holy Priest. With that he took out his gold-banded cudgel to draw a circle on the ground. He said to his master, "The circle I've drawn is stronger than a wall of bronze or iron. No tiger, leopard, wolf, demon, fiend or monster will dare come anywhere near it. But you must not step outside. I guarantee that you'll come to no harm as long as you sit still inside the circle." It turns out that such an invisible bound made by Sun Wukong also appears in the atmosphere sometimes.

One can easily locate the inversion layer from the temperature profile on a tephigram (Figure 1). This often occurs in a clear winter night under light wind condition. Without cloud cover, the earth's surface can radiate heat freely out to the atmosphere such that air near the ground cools down rapidly. Light winds reduce the mixing of the cooled air below with the warmer air above and help the formation of a temperature inversion. This type of radiation inversion usually occurs before dawn and dissipates when temperature rises after sunrise.

We don't know if the circle drawn by Sun Wukong is stronger than a metallic wall, but inversion layer does act like an invisible cover. When there is an inversion layer, cooler air below is denser, heavier and will not rise for no reason; whereas the warmer, lighter air above does not naturally move down. Air with no tendency to ascend nor descend is said to be stable, within which convection is hard to develop. The air underneath the inversion layer behaves as if it is covered by a blanket and can't escape from it. Fine dust particles discharged into the air may accumulate after being trapped, gradually forming haze with a reduction in visibility.

An inversion layer acting like a wall not only inhibits convective activity, but also affects the propagation of sound. Since sound wave travels faster in warm air, an inversion layer will bend the propagation of outgoing sound towards the cool air, reaching farther locations. This is the scene of the verse "hearing in my boat midnight sound of ringing bell from the Cold Mountain Temple" in the Tang poem "A night mooring near Maple Bridge."

On the other hand, an inversion enables us to enjoy seeing the enchanting sea of clouds. In spring, light east to southeasterlies bring warm and humid maritime airstream to Hong Kong. This together with an inversion which inhibits clouds from developing in height favours the formation of layer clouds. So long as the inversion layer stays below the hill top, one can see the beautiful scenic view just like a fascinating fairyland (figure 2).

The Observatory provides daily tephigram on its Weather Information for Aviation Sports Webpage. Information on inversion level, cloud type, cloud amount and cloud base can be found in the Weather Forecast for Local Aviation. 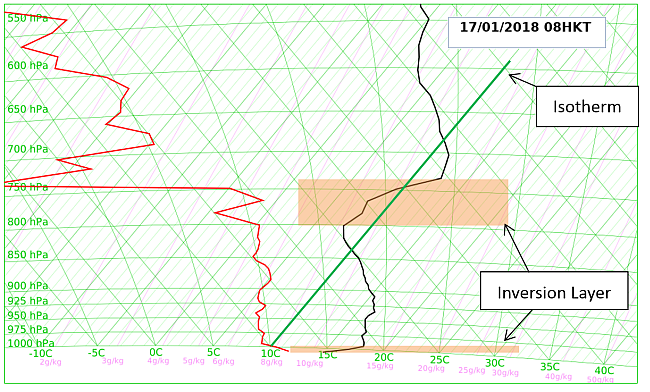 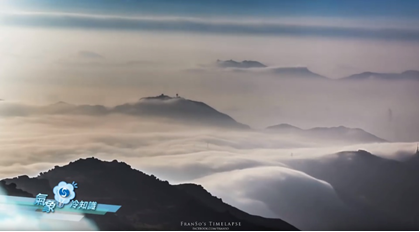