How Deep is the Earth and What is at its Centre?

How Deep is the Earth and What is at its Centre?

How deep is the Earth?

The Earths diameter was estimated, with reasonable accuracy, as early as 240 BC by a Greek named Eratosthenes. He based his calculation on the Suns shadows at two different places.  Nowadays we know that the Earths diameter is about 12,740 km (radius 6,370 km). We also know that the Earth consists of half a dozen relatively distinct layers, as illustrated in Figure 1 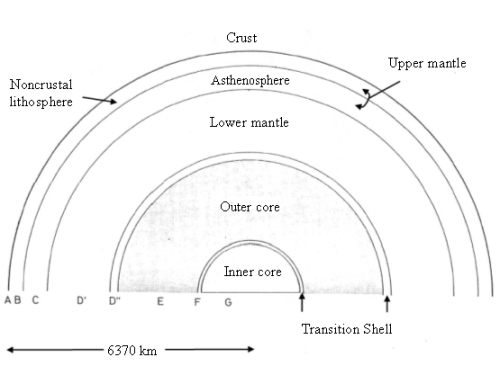 How do we know about this?  Even today, only the topmost, thin outer skin of the Earths rocks can be sampled directly at the surface and in mines or bore holes.  The deepest of these holes extend downward to only 10 km or thereabouts.  As a matter of fact, we know about the Earths interior through indirect evidence, mostly from earthquake waves.

What is at the Earths centre?

Ever since the British physicist Cavendish weighed the Earth in 1799, it has been known that its average density is about 5.5 times that of water.  However, rocks on the Earths surface are much lighter, with a very much lower density, e.g. about 2.7 times for granite.  It is therefore clear that some parts of the Earths interior must have a very high density indeed if the average is to have the observed value.

We now know that the Earth has a core that starts about half way down, at 2,890 km from the surface.  The core has two layers: an outer core and an inner core:

In the outer core, the convection of molten iron generates a magnetic field.  This geomagnetism helps us know the direction on a compass.  It also protects us from dangerous particles from the Sun, known as solar wind.