What is "space weather"?

Space weather originates from the Sun. It generally refers to all solar activities such as sunspots and solar flares, and the effects they may have on the Earth. The intensity varies from time to time, sometimes strong and sometimes weak. "Good weather" means a calm period of solar activities, while "bad weather" is a period of frequent and disturbed activities which may affect telecommunications, navigation and power systems on Earth and the operations of satellites or spacecraft.

What is a "solar cycle"?

Solar activity is periodic. A solar cycle (also called a sunspot cycle) is an approximately 11-year period with increasing and decreasing sunspot numbers. Each cycle starts from the time of minimum activity. The cycle numbering system dates back to the eighteenth century and the current solar cycle is cycle 23.

Sunspots are dark areas on the Sun's surface with relatively low temperatures (compared with other parts of the Sun) and strong magnetic fields. They normally appear in groups. The number of sunspots is usually taken as an indicator of solar activity. It increases significantly and can reach hundreds at the peak of a solar cycle. 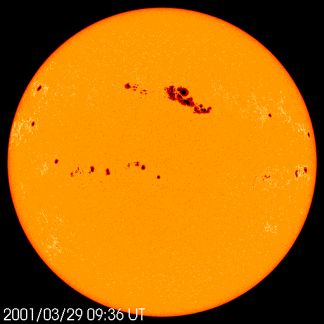 What is a "solar flare"?

Solar flare is a violent solar activity. Its occurrence is related to a sudden burst of electromagnetic waves and a vast amount of charged particles (mostly electrons) from the Sun. These electromagnetic waves can affect telecommunications, radio broadcast and navigation system on Earth. Sometimes, charged particles can also endanger the operations of spacecraft and satellites in space, and expose astronauts to higher amounts of radiation. 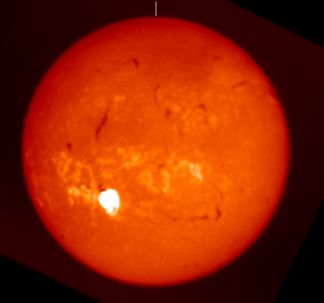 The Sun releases tremendous energy. Solar wind refers to this released energy in the form of charged particles at high speed, reaching several hundred kilometres per second. While the magnetic field on the Earth (which traps charged particles encircling the Earth into radiation belts called the Van Allen belts) normally protects our planet from the solar wind, it may be deformed in the event of violent solar wind, resulting in a geomagnetic storm on Earth. 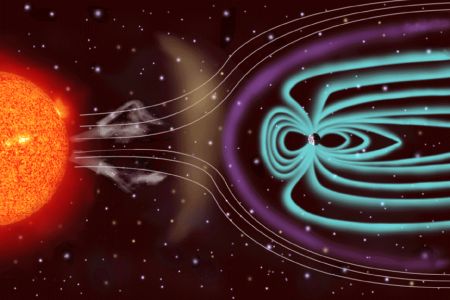 What is a "geomagnetic storm"?

Auroras are most commonly visible at high latitudes. They are associated with geomagnetic activity brought about by solar wind. Auroras occur as a result of charged particles (mostly electrons) from the Sun colliding with gas particles in the Earth's atmosphere, producing a glow in different colours. The patterns and shapes of the aurora are related to the flow of charged particles and the magnetic fields. In respect of the auroral colour, oxygen molecules produce green and red colours while nitrogen molecules produce purplish-red and blue colours.

How is space weather monitored?

As space weather originates from the Sun, it is monitored by international space weather centres using special satellites or telescopes. We will discuss more about this in the next issue.