The impact of global warming includes a rise in temperature, melting of ice and snow, rise in mean sea level, etc. The rise in mean sea level is caused by the thermal expansion of sea water as well as the land-based ice and snow melting and flowing into the oceans. Globally, the rate of sea level rise since the mid-19th century has noticeably accelerated. In Hong Kong, based on the records of the tide gauges installed at North Point/Quarry Bay, the sea level in the Victoria Harbour has been rising at a rate of about 3 cm per decade from 1954 to 2017 (Figure 1). The rate of sea level rise is similar in other regions in Hong Kong, such as Tai Po Kau in the Tolo Harbour. Based on the Fifth Assessment Report of the United Nations Intergovernmental Panel on Climate Change, the Observatory has made an assessment of the potential impacts to Hong Kong in terms of rising temperature and sea level in the 21st century. Under the high greenhouse gas emission scenario, the sea level in the vicinity of Hong Kong is expected to rise by 0.63 to 1.07 m by the end of this century (2081-2100) when compared to the average sea level in 1986-2005[1].

With the elevated sea level, the risk of typhoon-generated storm surges affecting Hong Kong will be enhanced. Storm surge is the rise of sea level due to the combined effects of low pressure and high winds associated with a tropical cyclone. When storm surge occurs during astronomical high tides (near New Moon or Full Moon), the resultant sea level can be quite extreme, leading to flooding in low-lying areas. Since the beginning of instrumental records in 1954, the maximum sea level in the Victoria Harbour associated with storm surges was 3.96 m above Chart Datum (mCD) during the passage of Super Typhoon Wanda in 1962. In comparison, the sea level in the Victoria Harbour rose to 3.57 mCD during the passage of Super Typhoon Hato in 2017, second only to the record set by Wanda (Table 1).

Table 1    Top ten maximum sea levels in the Victoria Harbour during the passages of tropical cyclones since 1954.

Apart from storm surges induced by tropical cyclones, there exists one other situation which also gives rise to abnormal sea level in Hong Kong. Such events normally occur during autumn or winter around the days of astronomical high tides when the winter monsoon brings strong winds to the south China coastal waters, resulting in appreciable sea level rise. One recent example occurred in Tai Po Kau on the night of 5 November 2017 when the sea level rose to a maximum of 2.99 mCD (Figure 2), about half a metre higher than the normal astronomical tide and causing minor flooding along the banks of Shing Mun River in Sha Tin[2]. One point worthy of note is that when the passage of a tropical cyclone coincides with the winter monsoon during astronomical high tides, the storm surge impact could still be quite significant even though the tropical cyclone may be skirting past at a relatively large distance. Typical cases are Bess, Nalgae and Elaine as shown in Table 1, all in the month of October when tropical cyclones still roam the South China Sea and the winter monsoon is also becoming increasingly active. 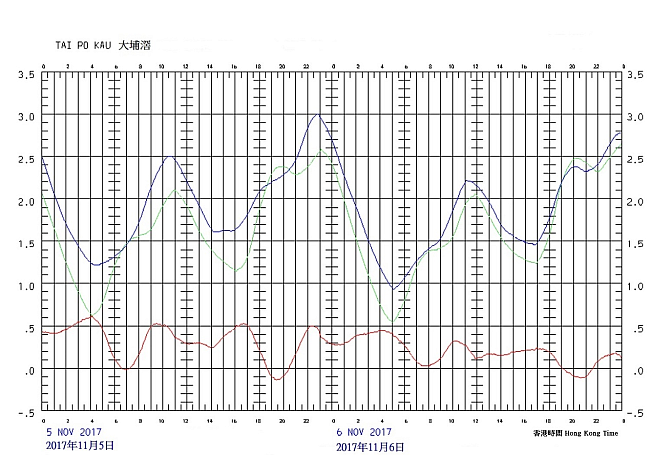