The pavement of the Third Runway of the Hong Kong International Airport has been completed and the runway will become the new “North Runway” in future. The former North Runway was re-designated as “Center Runway” on 2 Dec 2021. The name of the runway was changed from 07L and 25R to 07C and 25C respectively (Figure 1). Additional designator “C” is used for Centre Runway in order to identify the relative position of the parallel runways. 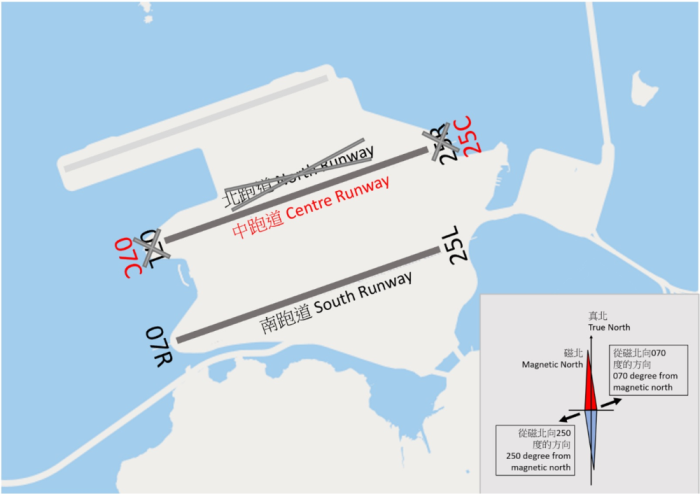 Figure 1  Schematic Diagram of Runway Re-designation. The former North Runway now become the Centre Runway and designated as 07C and 25C. The Third Runway will be put into operation in 2022 and be designated as 07L and 25R. (Naming convention of airport runways was discussed in “Magnetism of Airport Runways”.

The Hong Kong Observatory started to prepare for runway re-designation more than a year ago. Relevant meteorological systems and work procedures were modified so that aviation users such as air traffic controllers, pilots and other aviation users can accurately and easily grasp meteorological data compiled for individual runways (Figure 2). In addition to working closely with Civil Aviation Department on system transition, the Hong Kong Observatory also provided weather services to support Airport Authority to conduct outdoor works required for runway re-designation.

The Hong Kong Observatory is enhancing the meteorological systems and equipment to provide the necessary weather services to support the future operation of Three-Runway System.