The naming convention of Airport Runways

In general, the name of a runway is a number based on the points on a compass, from 01 to 36, reflecting the magnetic compass reading to the nearest 10 degrees and dropping the last digit. Large airports have additional designators for multiple runways, such as L or R respectively for the left or right runway in a parallel pair.

Compass is the most convenient way of measuring directions. For convenience of application, aeronautical charts and instruments are based on magnetic bearings and runways are normally designated by their magnetic headings. 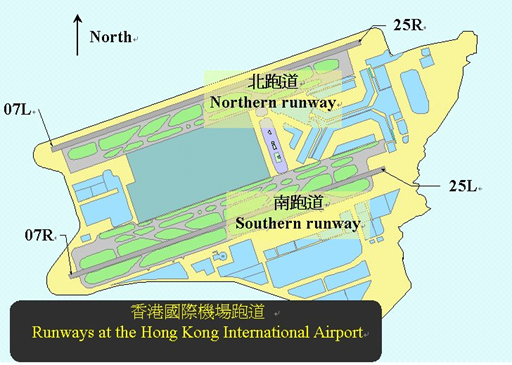 Figure 2   Painted signage of runway designator "07L" at the western end of the northern runway at the Hong Kong International Airport. (Source/Credits: Google)

What is Geographic North and Magnetic North?

The Earth rotates around an axis which points to the geographic North Pole and South Pole (aka "True North" and "True South"). True North is located in the middle of the Arctic Ocean whereas the South Pole lies in the Antarctica which can be considered stationary in general applications.

Magnetic north refers to the North Magnetic Pole. The Earth's magnetic poles exist because of its magnetic field. The magnetic field is produced by electric currents in the liquid part of its core which is constantly moving. Complex fluid motion in the outer core of the Earth (the molten metallic region that lies from about 2,800 to 5,000 km below the Earth's surface) causes the magnetic field to change slowly with time.

In general, a compass needle aligns itself with the Earth's magnetic field and is pointing to the Magnetic North Pole. The horizontal angular difference between true north and magnetic north is called MAGNETIC VARIATION or DECLINATION. It will change with time and geographic location. 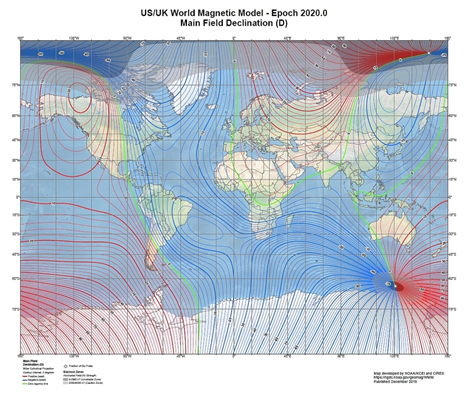 Problems brought about by using the magnetic north convention

As Earth's magnetic field lines are slowly drifting on the surface, the magnetic direction is continuously changing. This magnetic North Pole could shift by as much as 65 kilometres a year, and is steadily moving from somewhere over Canada towards Russia. When pre-planning a flight course, small aircraft pilots would be using true north on an aviation sectional map to plot their route. True north bearings would be converted to magnetic north for in-plane navigation using compass. These bearings are then adjusted on a pre-flight plan by adding or subtracting local variations of magnetism.

Effect of man-made structure in the surroundings

According to a case reviewed by the U.K. Air Accidents Investigation Branch (AAIB) on 31 October 2006, a Raytheon Hawker 800XP departing from London City Airport (LCY) for Brussels observed a significant heading difference between the two primary flight displays (PFD 1 and PFD 2), also between the PFD 1 and the standby instrument. The problem persisted with unreliable readings even after switching to the AHRS (attitude and heading reference system) according to their emergency procedure. Eventually, the pilots requested for air traffic control assistance for their return to LCY.

AAIB looked into the history of LCY. The airport once was a shipping dock in 1987, with railway lines running around the warehouses area. There were also large cast iron bollards along the dock walls for tying up ships. It was found that the railway lines were not totally removed when building the airport, where only sections of the bollards above the dock wall were removed. Furthermore, a steel-encased concrete pile which was some out-of-service oil pipeline was found underneath an aircraft holding area.

The AAIB inspector observed a needle deviation as much as +/- 60 degrees on a hand-held magnetic compass by walking around this Runway 28 holding area. The investigation concluded that the compass large deviations were caused by several ferrous magnetic signature anomalies, mainly from the piled-beam structures (bollards) underneath, steel-reinforced concrete and the railway lines below the holding area.

In view of the problem above, why we still use the magnetic north naming convention for airport runways? We will discuss this in the next article of airport geomagnetism, stay tuned.