The "Tail" of an Aircraft

The "Tail" of an Aircraft

It has been mentioned in an earlier article (“In the wake of a duck”, June 2013) that, whenever a duck swims in the water (or any object propels itself using the reaction force from a fluid) it would naturally leave behind a series of wave patterns (Figure 1).  The same also applies to an aircraft in flight.

Figure 1   Wake pattern left behind by a duck in water. (Photographed in Finland by the author)

When an aircraft is flying, the air pressure below its wings is higher than that above (thus providing lift). This pressure difference leads to the generation of vortices. The superposition of these vortices in turn generates a wake pattern, usually known as "aircraft wake turbulence" or "aircraft wake vortices" in the aviation community.

Wake flow from an aircraft mainly comprises a pair of counter-rotating vortices (Figure 2). Since these vortices may contain severe turbulence and subsidence, a trailing aircraft along the same flight path must maintain a suitable distance (or "aircraft separation") from the preceding aircraft in order to prevent encountering its wake flow, which might affect flight safety. It is worth mentioning that aircraft wake flow is generally invisible to the naked eye under clear air conditions, in contrast to the phenomenon of "contrail" (the latter is mainly composed of ice crystals resulting from the condensation of water vapour within aircraft engine exhaust, hence more easily observable). 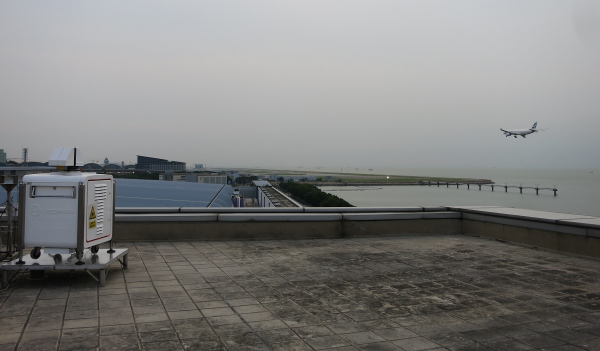 Figure 3   A short-range LIDAR (equipment in white to the left) performing scans near the arrival and departure corridors of the Hong Kong International Airport.

Vortices within aircraft wake flow are of relatively small size1, and often have a lifetime of only 1 to 2 minutes (or less) in the near-surface atmosphere. To observe these invisible airflow, remote-sensing instruments with high spatial and temporal resolution, such as the short-range LIDAR (light detection and ranging), would be required (Figure 3). Figure 4   Signature of aircraft wake flow as revealed by short-range LIDAR scans conducted by the Observatory at the Hong Kong International Airport. Different colours correspond to different radial wind velocities. Wind fluctuations due to the presence of wake vortices are highlighted in white.

Within the display of wind velocities as measured by the short-range LIDAR, the counter-rotating vortex pair stands out from the background wind field with its unique signature. If you take a look at the planar wind speed distribution in Figure 4, doesn't it resemble two long "tails" left behind by the landing aircraft?