In the Wake of a Duck

In the Wake of a Duck

Have you ever marveled at the long trail of waves left behind by a duck as it glides across the water surface? The pattern of these waves is governed by specific physical laws and is named "Kelvin wake" after its discoverer1.

As a duck propels itself forward by peddling in water, a reaction force (as described by Newton's Third Law in Physics) is simultaneously generated on the duck's webbed feet by the water. In the process, a series of waves comprising different frequencies is created, in a manner similar to the ripples caused by stones thrown into the water. The phenomenon of waves with different frequencies or wavelengths travelling at different speeds in the same medium (here water) is known as dispersion. Due to dispersion, wave groups generated by the duck's motion will travel at different speeds. Waves with different frequencies can also interfere with each other, reinforcing or cancelling each other's amplitude, such that the bulk of the wave group travels at another "group velocity". This leads to formation of the wave patterns (solid lines in Figure 2). Such wave patterns are continuously generated during the motion of the duck. If water is deep enough2, the group velocity turns out to be half of the wave speed. It is possible to show, using geometry and differential calculus, that the maximum angle is about 19.5 degrees. This sets the upper limit of the angle between the wave pattern and the motion of the duck. 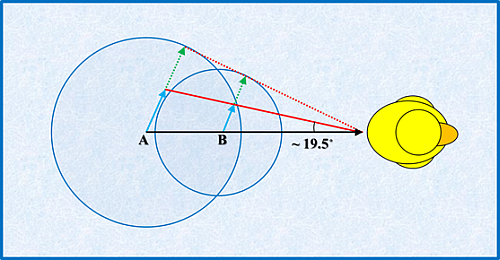 Figure 2  Schematic diagram of "Kelvin wake". Because of interference, waves (blue circles) generated by the duck at different times (e.g. points A and B) will not be cancelled out only at specific positions (e.g. red lines). Black, green and blue arrows represent the duck's motion, wave speed and group velocity respectively.

As long as water is deep enough, the shape and angle of this wake is independent of the mass, speed or location of the wave source. The same limiting angle therefore applies to all wakes whether left by a ferry or duck over water at different parts of the world (e.g. Figure 3). 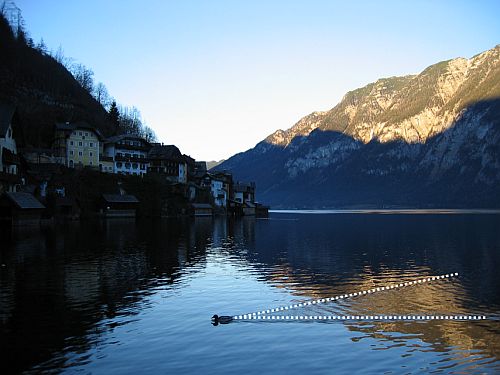 A duck generates wakes when moving on water. The beautiful wave pattern in fact contains rapid changes in direction and speed of water flow. Wakes can also be generated by motion in the atmosphere, which in extreme cases can pose invisible threats to aircrafts during landing or take-off - more on that later.