The Weather of October 2021

Attributing to the heavy rain induced by tropical cyclones Lionrock and Kompasu, October 2021 was much wetter than usual in Hong Kong with monthly rainfall amounted to 631.1 millimetres, more than five times of the normal figure of 120.3 millimetres (or more than six times of the 1981-2010 normal of 100.9 millimetres) and the second highest on record for October. The accumulated rainfall up to October this year was 2281.8 millimetres, a deficit of 3 percent compared with the normal of 2363.1 millimetres (or 2 percent below the 1981-2010 normal of 2334.0 millimetres) for the same period. October 2021 was also characterized by much warmer than usual weather in the first week and relatively cooler weather in the latter part of the month. Overall, the monthly mean temperature of 26.0 degrees was slightly higher than the normal figure of 25.7 degrees (or 0.5 degrees above the 1981-2010 normal).

Under light wind conditions, apart from isolated showers, it was very hot with sunny periods in Hong Kong on the first two days of the month. With plenty of sunshine, the temperature at the Observatory soared to 33.1 degrees on 1 October, the highest of the month. The daily minimum temperature of 28.8 degrees on 1 October was the highest on record for October and National Day. The daily mean temperature of 30.3 degrees on that day was also one of the highest on record for October. High temperatures also triggered localized thundery showers in some areas on that day. Dust devil was reported on the next day near the third runway construction site of the Hong Kong International Airport.

With the setting in of a fresh to strong easterly airstream, there were sunny intervals and a few thundery showers on 3 October. The showers were particularly heavy in some areas with more than 50 millimetres of rainfall recorded over Tai O. Affected by a relatively dry easterly airstream, the local weather was generally fine and hot apart from isolated showers on the next two days. Under the influence of a strong northeast monsoon, it was sunny and dry with winds strengthening from the east on 6 October.

Under the combined effect of Lionrock and the northeast monsoon, it was windy with squally heavy showers and thunderstorms in Hong Kong on 7 – 8 October. The rain was particularly heavy and persistent on 8 October with more than 200 millimetres of rainfall generally recorded over Hong Kong, necessitating the issuance of the second Black Rainstorm Warning in the year. The rainfall recorded at the Observatory on that day even reached 329.7 millimetres, more than two times of October’s monthly total normal figure of 120.3 millimetres and the highest daily rainfall on record for October. With Lionrock edging closer to the coast of Guangdong and winds over Hong Kong further strengthening on 9 October, the No. 8 Gale or Storm Signal was issued early that morning. Under the inclement weather, a catamaran was overturned by huge waves over the waters near Po Toi Island on 7 October. Two people on board fell into the sea and one of them was drowned. The scaffolding of a residential building in Happy Valley collapsed on the morning of 8 October, resulting in one death and one injury. The heavy downpour on that day also caused serious flooding to some roads.

When Lionrock moved away from Hong Kong, showers eased off and winds subsided gradually during the day on 10 October. Affected by the dry northeast monsoon, the local weather was mainly fine on 11 October. With the approach of Kompasu and under the combined effect of the northeast monsoon, local winds strengthened again on 12 October, reaching strong to gale force that night. The No. 8 Gale or Storm Signal was issued again on the afternoon of 12 October with only a break time of 60 hours and 40 minutes after the cancellation of the No. 8 Signal for Lionrock. This was the shortest record of break time between two No.8 signals for two different tropical cyclones since 1946. For most of the time on 13 October, winds over Hong Kong were generally strong to gale force, with winds reaching storm force offshore and on high ground. The outer rainbands of Kompasu brought heavy showers to Hong Kong on 12 – 13 October with over 100 millimetres of rainfall recorded in some parts of the territory on 13 October. Moreover, the storm surge induced by Kompasu raised the water level in Hong Kong over 1 metre higher than the normal tide levels on the morning of 13 October. Coincided with the astronomical high tide, the aggregated effect resulted in the inundation of some low-lying areas in Hong Kong, including Tai O, Shing Mun River and Lei Yue Mun. With Kompasu moving away from the territory, local winds moderated gradually with less rain on 14 October.

A rain area brought mainly cloudy weather and a few rain patches to Hong Kong on 15 October. A surge of the dry northeast monsoon reached the coast of Guangdong on 16 October, the local weather of the following few days became generally fine and dry during the day with slightly cooler mornings. Affected by an easterly airstream, apart from a few light rain patches in the morning, the weather remained mainly fine during the day on 20 October.

A cold front moved across the coast of Guangdong on the morning of 21 October. Locally, there were a few rain patches with winds strengthening from the north in the afternoon and temperatures falling significantly. The associated northeast monsoon brought relatively cool weather and a few light rain patches to Hong Kong on the next two days. The temperature of the Observatory dropped to 18.2 degrees on the morning of 22 October, the lowest of the month. Dominated by the northeast monsoon, it was sunny and dry during the day on 24 – 26 October. With a cloud band covering the coastal areas of Guangdong, apart from mainly fine weather during the day in Hong Kong on 29 October, it was mainly cloudy with a few morning rain patches on 27 – 30 October. With the clouds thinning out, there were sunny periods on the afternoon of the last day of the month.

Six tropical cyclones occurred over the South China Sea and the western North Pacific in October 2021. 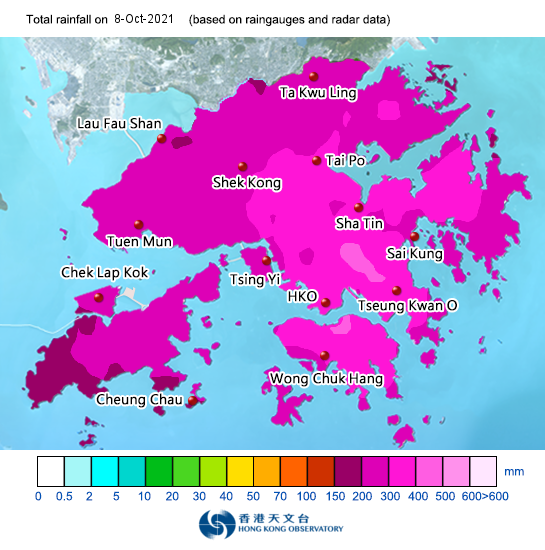 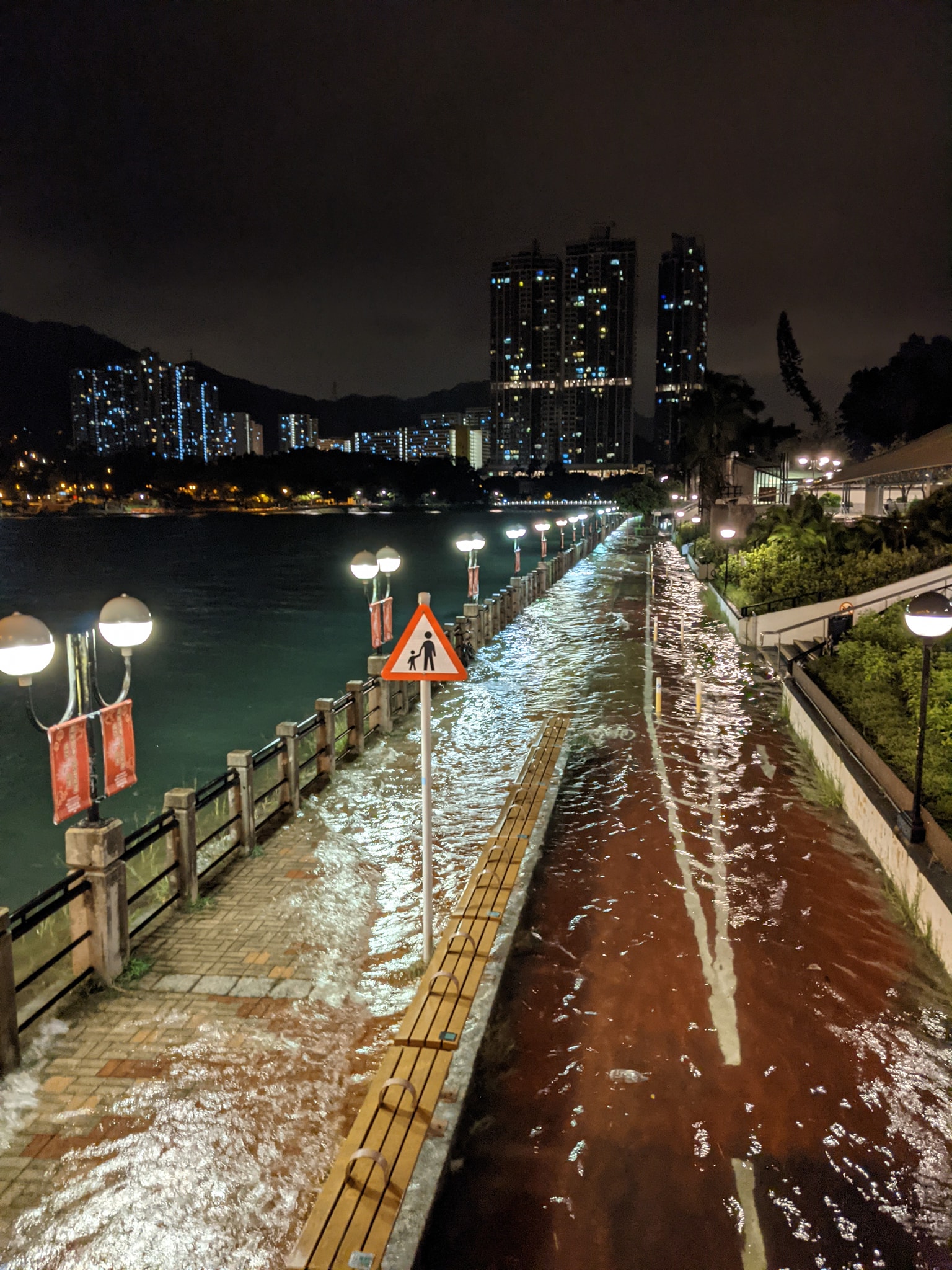 A tree was blown down at Tung Tau Estate, Wong Tai Sin during the passage of Kompasu on 13 October 2021
(Courtesy of Radio Television Hong Kong)

Details of issuance and cancellation of various warnings/signals in the month are summarized in Tables 1.1 to 1.8.  Monthly meteorological figures and departures from normal for October are tabulated in Table 2.

Warnings and Signals issued in October 2021 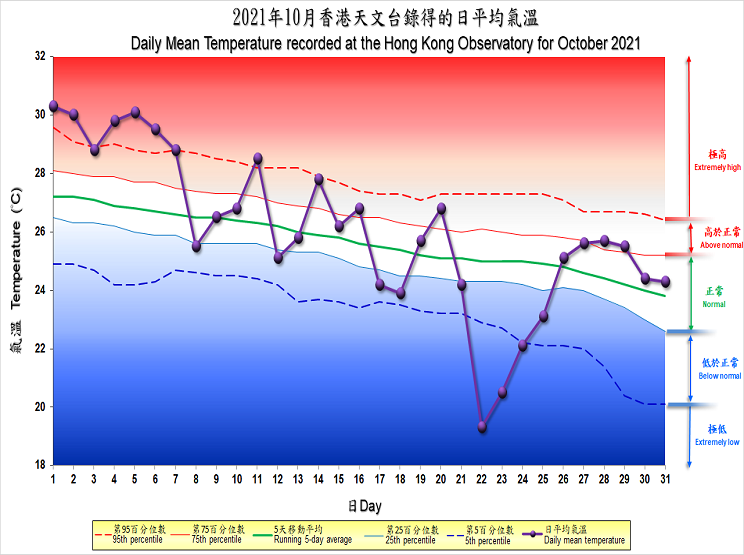 Extract of Meteorological Observations in Hong Kong for October 2021