The Weather of September 2021

Mainly attributing to the stronger than usual subtropical ridge over southern China, September 2021 was the hottest September in Hong Kong on record. The monthly mean maximum temperature of 32.8 degrees, monthly mean temperature of 29.7 degrees and monthly mean minimum temperature of 27.8 degrees were 2.3 degrees, 1.8 degrees and 1.7 degrees above their corresponding normals (or 2.7 degrees, 2.0 degrees and 2.0 degrees above their corresponding 1981-2010 normals) and all of them were the highest on record for September. There were in total 15 very hot days and 11 hot nights in the month, both breaking the records for September. Moreover, from January to September, the numbers of very hot days and hot nights so far in 2021 already reached 53 days and 57 days respectively, both breaking the previous records set in 2020. September 2021 was also much drier than usual with a total rainfall of 129.6 millimetres, about 40 percent of the normal figure of 321.4 millimetres (or 40 percent of the 1981-2010 normal of 327.6 millimetres). The accumulated rainfall up to September this year was 1650.7 millimetres, a deficit of 26 percent compared with the normal of 2242.8 millimetres (or 26 percent below the 1981-2010 normal of 2233.1 millimetres) for the same period.

Under the dominance of the anticyclone over southern China, apart from a few showers and isolated thunderstorms, the weather of Hong Kong was sunny and very hot for most of the time on 1 – 12 September. Meanwhile, over the western North Pacific, Super Typhoon Chanthu tracked northwards and moved across the Luzon Strait and the sea areas to the east of Taiwan on 10 – 12 September. With plenty of sunshine and under the influence of the outer subsiding air of Chanthu, the temperature at the Observatory soared to 34.5 degrees on 12 September, the highest of the month. The daily mean temperature of 31.2 degrees on that day was also one of the highest on record for September.

On 13 – 17 September, under light wind conditions, high temperatures triggered localized thundery showers in some regions, despite sunny periods in between. The daily minimum temperature of 29.5 degrees on 13 September was one of the highest on record for September. On 16 September, apart from the localized heavy showers and thunderstorms, hail was also reported at Tseung Kwan O at around 1:00 p.m. and more than 100 millimetres of rainfall were recorded in that region on that day. Moreover, a person died after being struck by lightning in Clear Water Bay that afternoon.

Affected by an anticyclone aloft, apart from a few showers and isolated thunderstorms, there were sunny periods on 18 – 19 September. With the return of the light wind conditions, day heating triggered a few thundery showers apart from sunny periods on 20 – 22 September. The showers were particularly heavy in some areas on 21 September. More than 60 millimetres of rainfall were recorded over Tsuen Wan District. With plenty of sunshine, the temperature at the Observatory soared to a maximum of 34.0 degrees on the afternoon of 22 September, making it the highest record for the day following the Mid-Autumn Festival.

With the setting in of a fresh to strong easterly airstream on the night of 22 September, the local weather turned mainly cloudy with occasional showers and squally thunderstorms the next day. Under the rain, the temperature at the Observatory dropped to a minimum of 26.0 degrees, the lowest of the month. This was also the highest monthly absolute minimum temperature on record for September. The weather gradually became sunnier and less showery from 24 to 26 September. Under the influence of an anticyclone aloft and the moderation of the easterly airstream, apart from isolated showers and thunderstorms on 29 – 30 September, the local weather became mainly fine and very hot towards the end of the month.

Five tropical cyclones occurred over the South China Sea and the western North Pacific in September 2021. 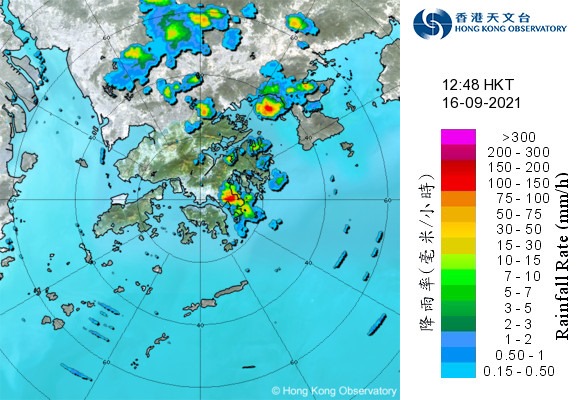 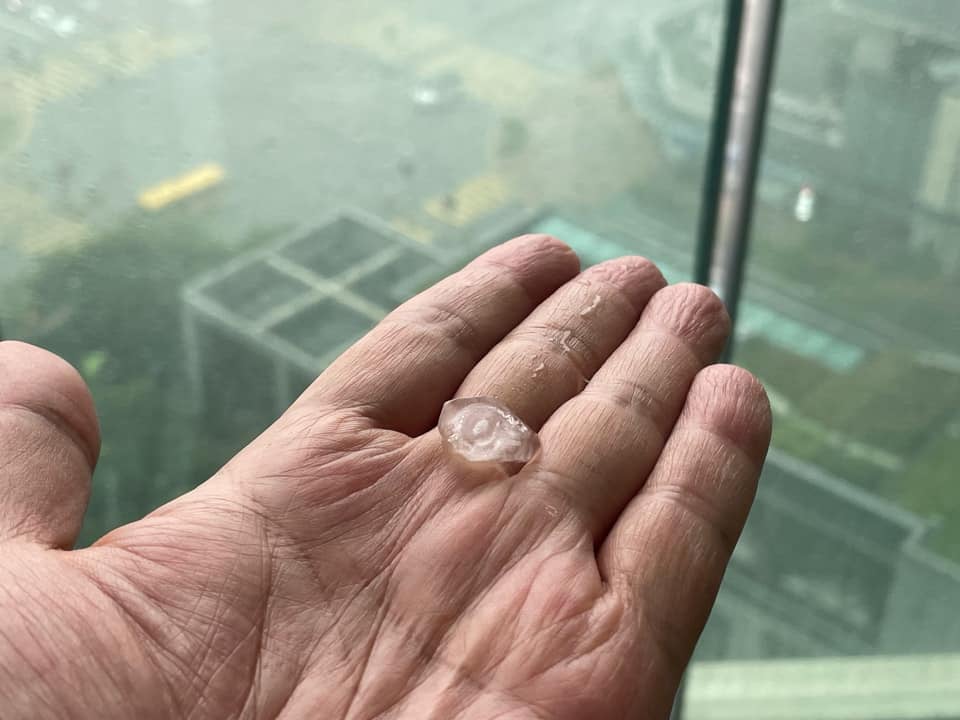 
Details of issuance and cancellation of various warnings/signals in the month are summarized in Tables 1.1 to 1.2. Monthly meteorological figures and departures from normal for September are tabulated in Table 2.

Warnings and Signals issued in September 2021 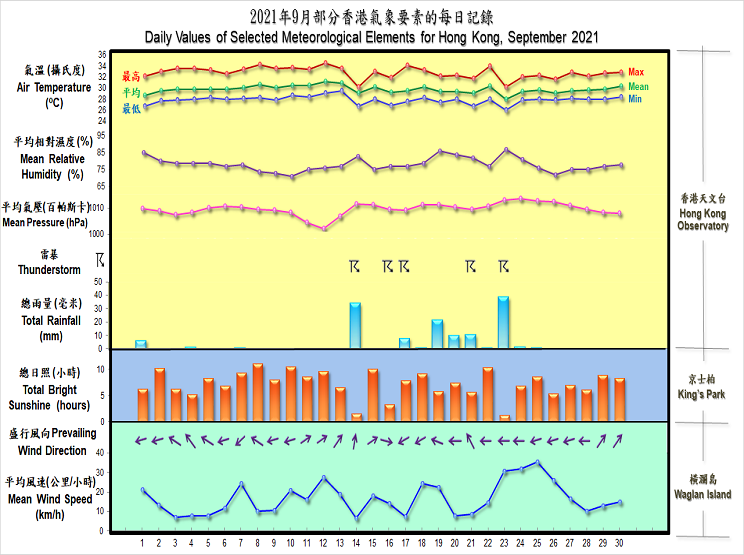 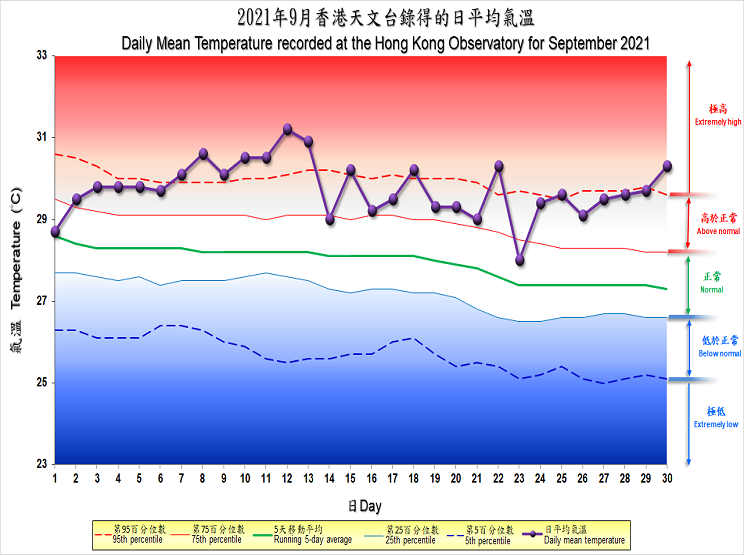 Extract of Meteorological Observations in Hong Kong for September 2021