With relatively less cold air intrusion from the north, April 2021 continued to be much warmer than usual in Hong Kong. The monthly mean minimum temperature of 22.4 degrees, monthly mean maximum temperature of 27.0 degrees and monthly mean temperature of 24.1 degrees were 1.3 degrees, 1.4 degrees and 1.1 degrees above their corresponding normals (or 1.6 degrees, 2.0 degrees and 1.5 degrees above their corresponding 1981-2010 normals) and respectively the fifth, seventh and ninth highest on record for April. With the dominance of upper-air anticyclone over southern China for most of the time in the month, April 2021 was also much drier than usual with a total rainfall of only 32.5 millimetres, about 21 percent of the normal figure of 153.0 millimetres (or 19 percent of the 1981-2010 normal of 174.7 millimetres). The accumulated rainfall recorded in the first four months of the year was 98.1 millimetres, a deficit of 67 percent when compared to the normal of 300.4 millimetres (or 71 percent below the 1981-2010 normal of 336.1 millimetres) and the tenth lowest on record for the same period.

With the establishment of an anticyclone aloft and the departure of the cloud band from the South China coast, the weather of Hong Kong was generally fine with hot afternoons on 1 - 3 April. Under the influence of a fresh to strong easterly airstream, local weather became mainly cloudy and slightly cooler with a few rain patches on 4 - 5 April.

Affected by an anticyclone aloft southern China, local weather improved with sunny periods on 6 - 7 April. Under the influence of an easterly airstream, the weather became cloudier on 8 April. With the strengthening of the easterly airstream and affected by the upper-air disturbance, it was cloudy with a few showers and cooler on 9 April. More than 5 millimetres of rainfall were recorded over most parts of the territory. The temperature at the Observatory dropped to 19.7 degrees under the rain in that morning, the lowest of the month.

Details of issuance and cancellation of various warnings/signals in the month are summarized in Tables 1.1 to 1.2.  Monthly meteorological figures and departures from normal for April are tabulated in Table 2.

Warnings and Signals issued in April 2021 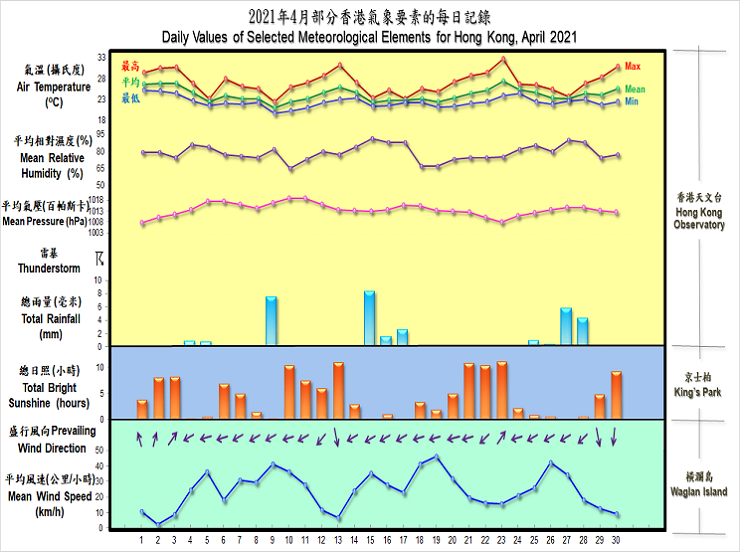 Extract of Meteorological Observations in Hong Kong for April 2021