Under the influence of an easterly airstream, the weather of Hong Kong was mainly cloudy with sunny periods on the first day of March. A cold front moved across the coast of Guangdong on the morning of 2 March. Locally, apart from a few light rain patches in the morning and at night, it was dry with sunny periods during the day on that day. The associated northeast monsoon and a band of clouds brought a few rain patches and slightly cooler weather to Hong Kong on 3 – 4 March.

With the moderation of the northeast monsoon and setting in of a humid maritime airstream, the weather of Hong Kong remained cloudy with a few rain patches and coastal fog on 5 – 6 March. The visibility at Waglan Island once fell below 200 metres on 6 March. Meanwhile, a trough of low pressure over southern China moved southwards gradually. There were a few showers and isolated thunderstorms on 6 March. A few millimetres of rainfall were generally recorded over the territory on that afternoon, and rainfall even exceeded 20 millimetres over the northern part of the New Territories.

A replenishment of the northeast monsoon reached the coast of Guangdong and brought cooler weather to the region on 7 March. Locally, it was cloudy with a few rain patches and relatively low visibility in some areas. The weather was a mixture of sunny intervals and a few rain patches the next day. With the cloud bands thinning out gradually, the weather of Hong Kong turned generally fine on the afternoon of 9 March. Affected by a fresh to strong easterly airstream, the weather became cloudier with a few light rain patches on 10 March. With the moderation of the easterly airstream and thinning out of the clouds, generally fine weather returned on the afternoon of 11 March and remained so on the next day.

Local winds strengthened from the east again and the weather became cloudier on 13 - 14 March. With the setting in of a relatively dry easterly airstream, sunny and warm weather returned to Hong Kong in the next few days. Affected by a relatively humid easterly airstream, the weather turned mainly cloudy with a few rain patches on 18 March. With the clouds thinning out, the weather of Hong Kong became fine on 19 - 20 March. With plenty of sunshine and under light wind conditions, the temperature at the Observatory soared to a maximum of 29.7 degrees on the afternoon of 20 March, the highest of the month. It was also the hottest Vernal Equinox on record.

A cold front moved across the coast of Guangdong on the morning of 21 March and brought cooler weather to the region. Under the influence of the associated northeast monsoon, local weather turned mainly cloudy that day and on the next few days. It was dry and appreciably cooler on 22 March with temperature at the Observatory falling to a minimum of 15.8 degrees in the morning, the lowest of the month. With the clouds dissipating and the setting in of a ridge of high pressure, local weather became generally fine on 25 – 26 March. Affected by a warm southerly airstream and the anticyclone aloft over the northern part of the South China Sea, the weather of Hong Kong was generally fine with hot afternoons for the rest of the month. The daily mean temperature of 26.6 degrees on 30 March was the highest on record for March. Moreover, the daily minimum temperature of 25.3 degrees on 30 and 31 March were both the highest on record for March.

There was no tropical cyclone over the South China Sea and the western North Pacific in March 2021.

Details of issuance and cancellation of various warnings/signals in the month are summarized in Tables 1.1 to 1.3.  Monthly meteorological figures and departures from normal for March are tabulated in Table 2.
Warnings and Signals issued in March 2021 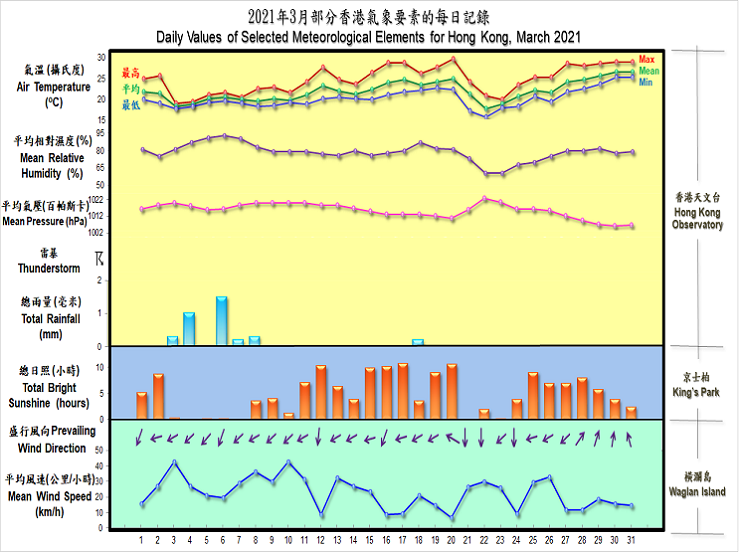 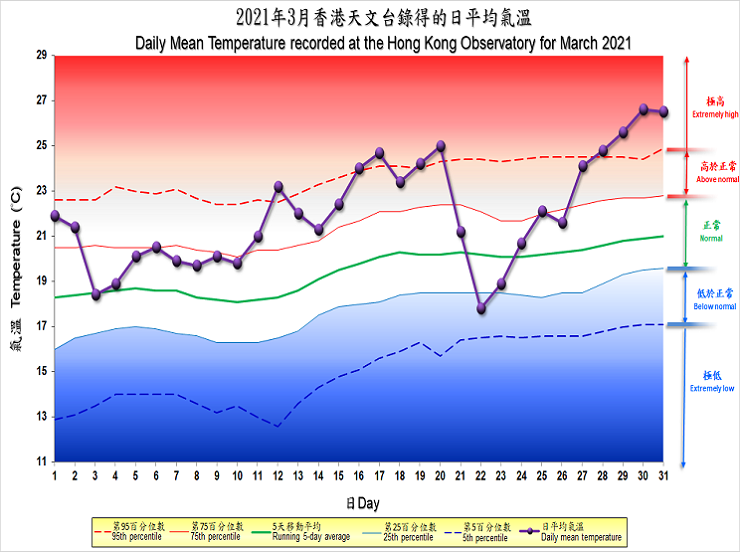 Extract of Meteorological Observations in Hong Kong for March 2021