The Weather of February 2021

The weather of Hong Kong was fine and warm during the day on the first two days of the month. With plenty of sunshine, the temperature at the Observatory rose to a maximum of 27.6 degrees on the afternoon of 2 February, the highest of the month. A surge of the northeast monsoon arrived in the evening, local weather became windier and slightly cooler and remained so on the next day. Affected by a dry northeast monsoon, it was generally fine, warm and dry during the day on 4 – 7 February.

Under the influence of a strong easterly airstream, the weather of Hong Kong turned cloudier on 8 – 9 February. Affected by an upper-air disturbance and the associated rainband, local weather became cloudy with rain and cooler on 10 February. More than 30 millimetres of rainfall were generally recorded over the territory on that day. The weather remained cloudy and cool on 11 February with the temperature at the Observatory falling to a minimum of 15.3 degrees on the morning, the lowest of the month.

Under the influence of a dry northeast monsoon, the weather of Hong Kong turned fine with cool morning on 12 February, the first day of the Lunar New Year. Generally fine weather with warm daytimes persisted over the territory on 13-23 February.

With a fresh easterly airstream affecting the coast of Guangdong and a cloud band covering the northern part of the South China Sea, the weather of Hong Kong turned mainly cloudy on 24 February. There was a few rain patches on 25 February. It was warm with sunny intervals during the day on 26 February. A cold front moved across the coast of Guangdong that night and brought rainy weather to the territory. Under the influence of the northeast monsoon, local weather became cooler the next day with some rain in the morning. It remained mainly cloudy on the last day of the month.

One tropical cyclone occurred over the South China Sea and the western North Pacific in February 2021.

Details of issuance and cancellation of various warnings/signals in the month are summarized in Tables 1.1 to 1.2.  Monthly meteorological figures and departures from normal for February are tabulated in Table 2.

Warnings and Signals issued in February 2021 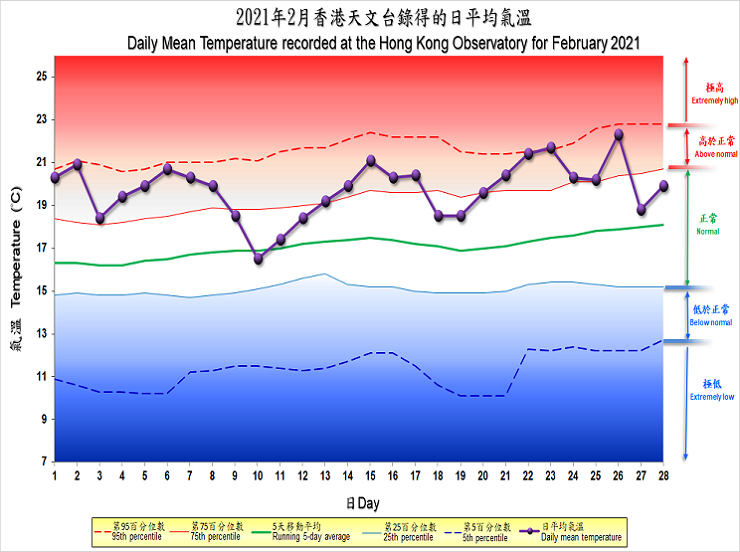 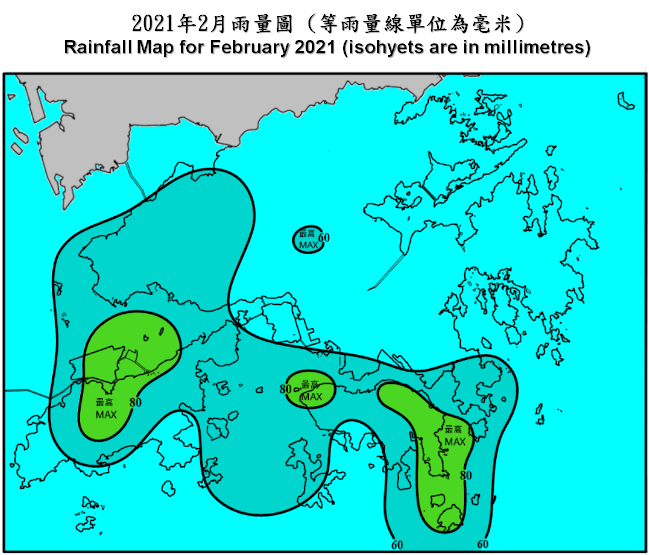 Extract of Meteorological Observations in Hong Kong for February 2021