SPECIAL ANNOUNCEMENT ON FLOODING IN THE NORTHERN NEW TERRITORIES

The announcement is broadcast by radio and television to the public, and will be updated at appropriate intervals until heavy rain ceases.

The special announcement supplements routine weather forecasts by drawing attention to potential flooding in the northern New Territories due to heavy rain. It is intended to prompt the public to take precautionary measures against flooding and to alert farmers, fish farm operators, engineers, contractors and others who are likely to suffer losses from flooding. The announcement also alerts the relevant government departments and organisations to take appropriate actions, such as opening of temporary shelters, search and rescue operations, closure of individual schools and relief work. It is issued irrespective of whether other severe weather warnings, e.g. tropical cyclone signals or rainstorm warning signals, are in force.

The special announcement is issued after some heavy rainfall has fallen in the northern New Territories. Like all weather warnings, it represents an assessment of the weather based on the latest information available at the time. There will unavoidably be false alarms, that is, after the announcement has been issued, the rain that has actually fallen does not result in flooding. There will also be occasions when heavy rain leading to flooding develops suddenly and affects the northern New Territories before an announcement can be issued. 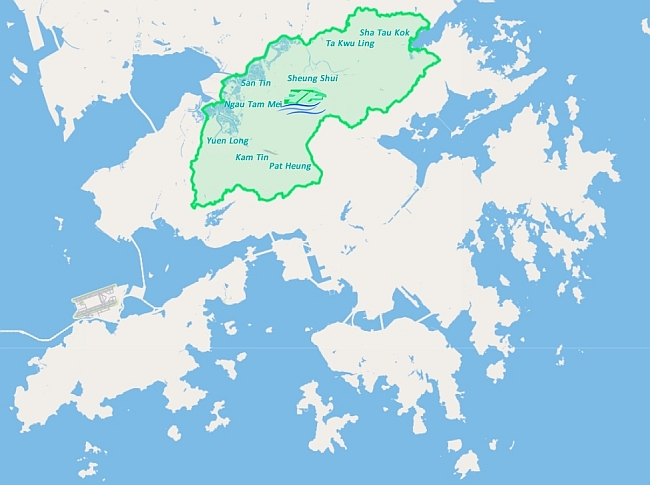 RAINSTORMS AND FLOODING IN THE NORTHERN NEW TERRITORIES

Although heavy rainstorms are not uncommon at any time of the year in Hong Kong, most of them happen during the summer months. Indeed, close to 80 % of the annual rainfall occurs between May and September. The highest ever hourly rainfall recorded at the Hong Kong Observatory is 145.5 millimetres measured during the rainstorms on 7 June 2008.

Every year heavy or prolonged rain causes flooding in Hong Kong. The public, farmers, fish farm operators, engineers, architects, contractors and others concerned should take all necessary precautions against damage.

Flooding occurs when rainfall is so high that natural or engineered drainage fails to drain away the surface runoff. Floods are usually fairly transient in the urban areas. However, in the plains in the northern New Territories where the catchment area is relatively large and the slope is gentle, it takes some time (usually of the order of a couple of hours) for the rainwater to accumulate and to drain away. The resulting floods may therefore last up to a few hours.

In recent years, there have been repeated cases of localised rainstorms occurring in the northern New Territories, which gave rise to significant flooding there but virtually no impact elsewhere in Hong Kong. For example, on 27 September 1993 after the passage of Typhoon Dot, the low lying area of the northern New Territories was completely inundated with flood water. On 22 July 1994, over 300 millimetres of rain were recorded in the northwestern part of the New Territories. 300 hectares of farmland and 150 hectares of fish ponds were inundated. Firemen had to use dinghies to rescue villagers whose houses were surrounded by flood water.

In order to issue timely warnings to the public, the Hong Kong Observatory keeps a continuous watch on the weather in and around Hong Kong. Readings from a network of more than 100 automatic rain-gauges covering the whole territory are telemetered to the Observatory Headquarters to provide up-to-the-minute information essential for assessing the likelihood of flooding and landslips. Water-level information from the northern part of the New Territories is also similarly relayed to the Observatory for real-time monitoring of floods in these areas. In addition to conventional meteorological observations, the Observatory's weather radar system provides a good means to continuously monitor the movement and development of rain-bearing clouds. Meteorological satellite imagery at high resolution are received at frequent intervals, providing a bird's eye view of cloud patterns over Asia and the western Pacific.