Newsletter for the Aviation Community Issue No. 14 - Nov 2000

Probing the Sea, Predicting the Air

To many people, the atmosphere and the sea are two completely different things. They may only pay attention to the weather forecast when going out, or to sea surface temperatures (SST) provided by the Hong Kong Observatory when planning a fishing or bathing trip to the seaside. However, to the weather forecaster, the atmosphere and the sea are interrelated. SST is important in predicting such weather phenomena as fog and sea breeze. On a wider scale, the well-known El Nino phenomenon is closely associated with the worldwide SST distribution.

Starting from July this year, the Fire Services Department (FSD) colleagues have kindly undertaken voluntary SST measurements at the two Sea Rescue Berths inside the airport. "The measurement is simple - it only takes about five minutes", said Mr. W.T. Chow, Senior Divisional Officer of FSD at Chek Lap Kok. "All we need to do is to use a special bucket to collect some sea water 1 metre down, and take its temperature."

At present, the SST is measured twice a day. "Unless there is emergency, we would endeavour to make the measurements on schedule," remarked Mr. Chow. "This means sometimes we have to do it under a deluge of rain or burning sun. But we are pleased to do it because we know that the measurements are valuable for weather forecasting." 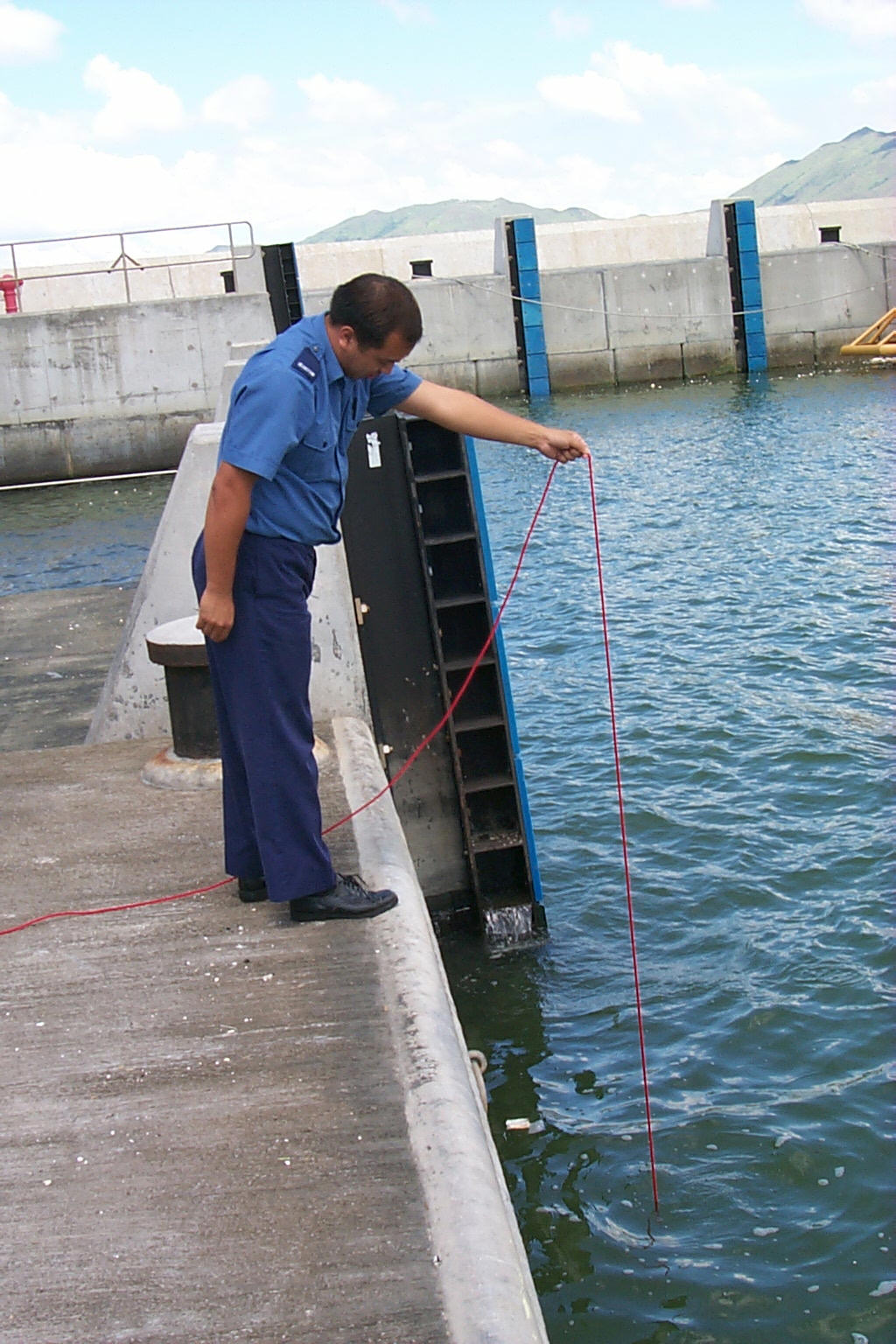 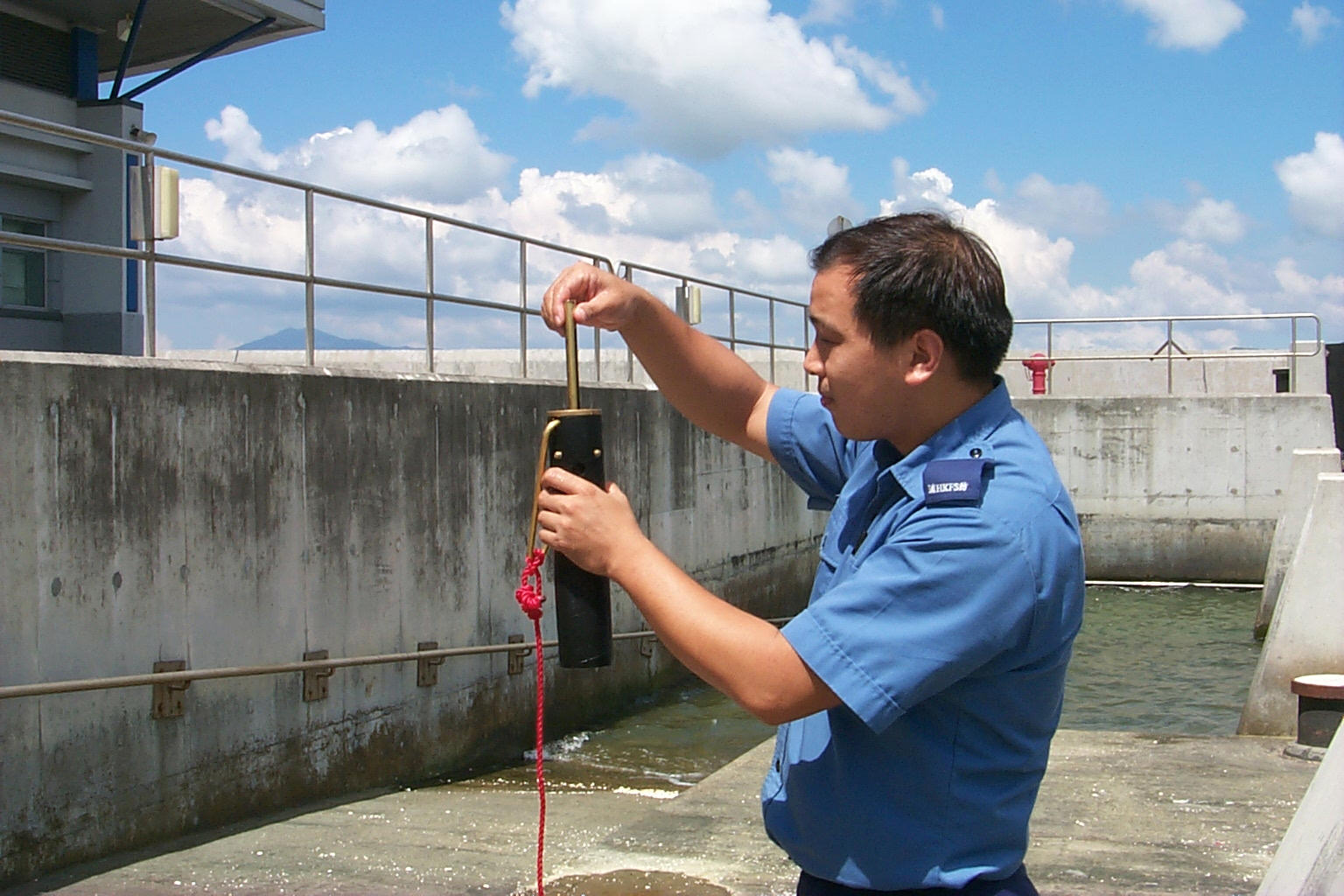 Solar energy plays an important role in environment conservation. Years ago, Hong Kong Observatory installed solar panels at remote automatic weather stations to provide power supply to equipment of the stations. Though solar panels are nothing new, the solar energy device installed inside Tai Mo Shan Weather Radar Station is a new initiative by the Architectural Services Department to provide electricity for facilities there including air-conditioning for some of the rooms. Let us make good use of solar energy and conserve the environment. 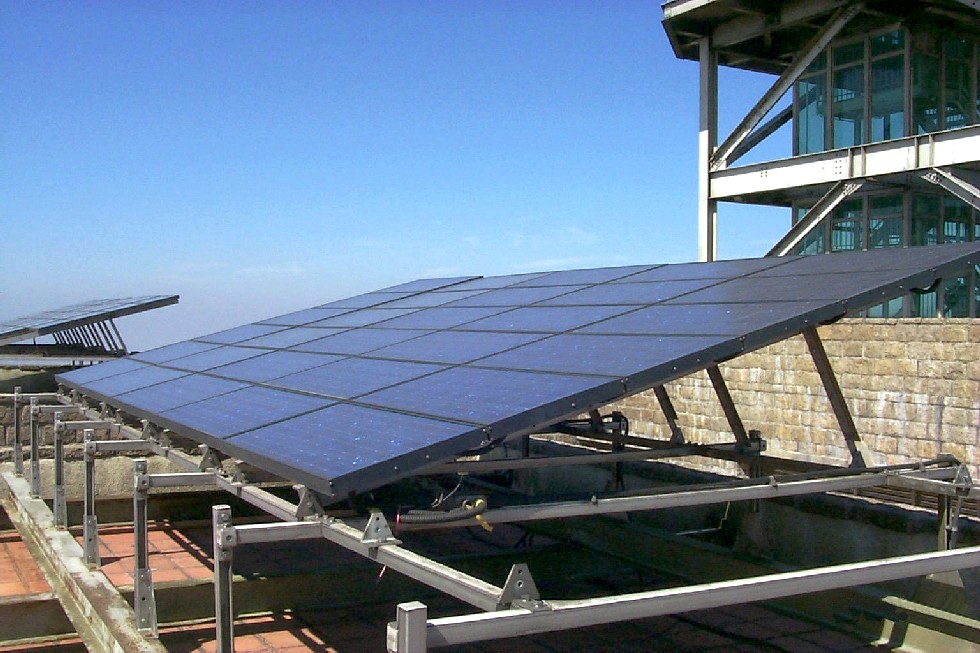 Following the installation of a wind power system at Sha Chau Automatic Weather Station (AWS) in early 2000, another wind turbine was set up at Nei Lak Shan AWS in May 2000.

This AWS is located on a hilltop overlooking the Hong Kong International Airport. It is about 700m above mean sea level and is used for monitoring hilltop winds over Lantau for evaluation of terrain-induced windshear.

Nei Lak Shan is often covered by clouds, rendering use of solar energy less effective. It is well exposed, however, making wind power an ideal source of alternative energy. Wind speed as low as 18 km/h is sufficient to support the whole station. The reliability of power supply for this station has been greatly enhanced with the addition of wind turbine. We plan to install wind turbines at three more AWSs in the coming year. 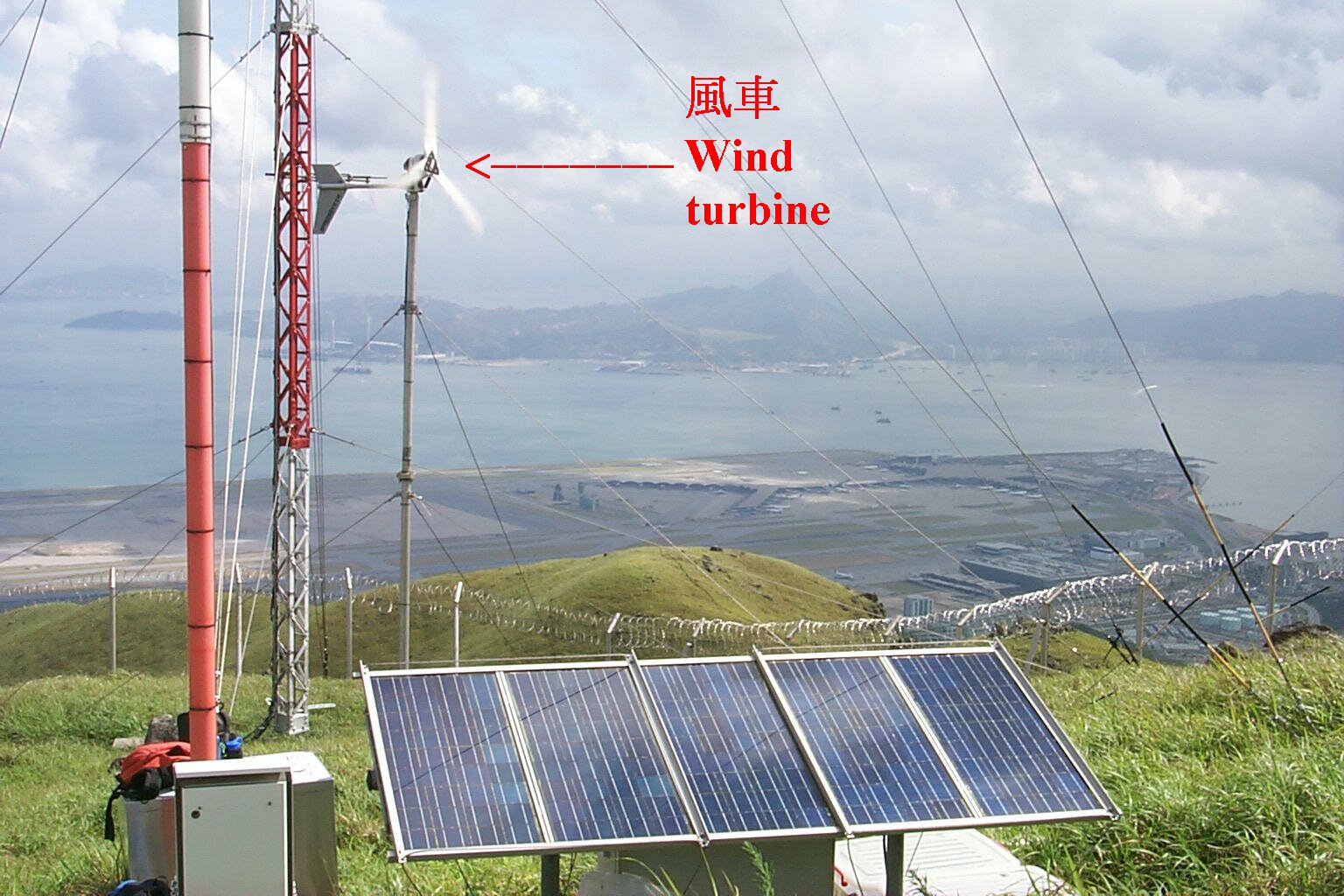 Weather observations made by the Observatory's observers during 1979-1983 indicate that the annual average number of thunderstorm days at Chek Lap Kok is 45.5, higher than Kai Tak's 37 (see Table 1).

In the last two years, the Observatory's Terminal Doppler Weather Radar (TDWR) has proved to be valuable in detecting thunderstorms and related phenomena in Chek Lap Kok.

Mean Number of Days with Thunderstorm 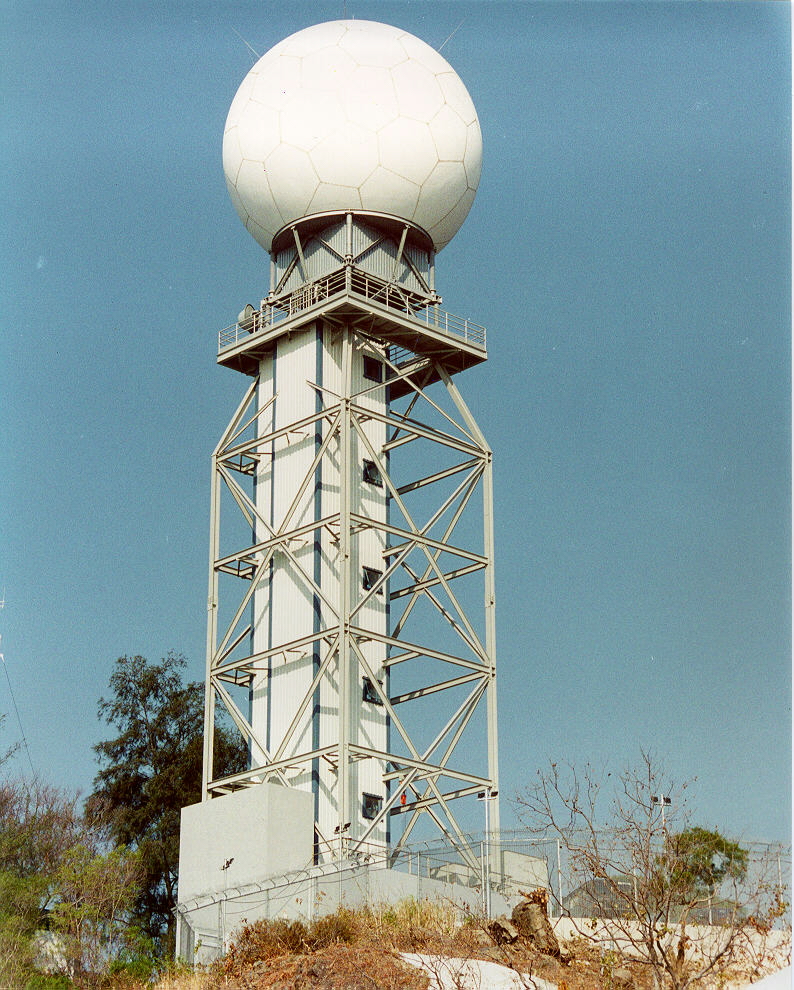 In late July, the Observatory invited two renowned experts to Hong Kong to review the windshear and turbulence warning services for the Hong Kong International Airport. The experts were Dr. Neil Gordon from New Zealand and Dr. Michael Eilts from U.S.A.

Apart from inspecting the Observatory's meteorological set-up, the experts flew on a helicopter around Lantau Island to appreciate the topography and the various meteorological facilities around the airport. They also met and discussed with airlines and Civil Aviation Department representatives.

The experts positively recognised the value of the existing facilities and the Observatory's work on windshear, and recommended actions to further improve the service. 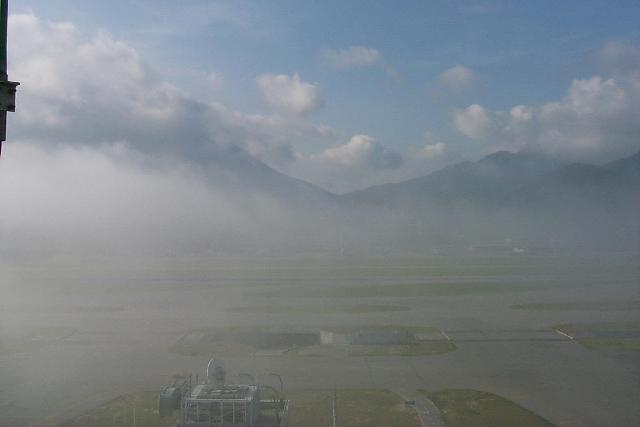 Fig. 8 Shallow fog over the airfield, with high hills of Lantau clearly visible in the background (photo taken at the same time as Fig. 7).

Second Round of Intensive Windshear and Turbulence Reporting Exercise

The second round of the Intensive Windshear and Turbulence Reporting Exercise was conducted from 14 August to 17 September 2000. During the period, over 5000 pilot reports from commercial aircraft were received. In order to have a better understanding of the air flow around Chek Lap Kok, the Government Flying Service (GFS) conducted investigation flights using a twin-engined Jetstream J-41 fixed wing aircraft.

GFS has a long history of co-operation with the Observatory. Back in the 1980's. GFS (formerly Royal Hong Kong Auxiliary Air Force) undertook investigation flights using a small aircraft called Bulldog. During each flight, the pilot made qualitative assessment of the severity of turbulence above the proposed runways and glide paths of the airport at Chek Lap Kok.

With the better-equipped Jetstream J-41, wind and temperature measurements at various altitudes were collected in addition to information of windshear and turbulence.

We gratefully acknowledge the contributions of all participating airlines, GFS and Civil Aviation Department to the exercise.

Hills disrupt the flow of air crossing them, like rocks blocking a river stream. When the airflow is towards mountainous Lantau, the airport may on occasions be affected by windshear generated by the hills.

In the first two years since the airport opened, terrain-induced windshear were mostly observed in March when cool surface easterlies were capped by

strong southeasterlies. A typical example is the windshear event occurring on 8 March 1999.

A number of pilots of aircraft landing at HKIA reported windshear after 12UTC (8 p.m. local time) on this day. In particular, at around 1230UTC, a pilot reported a 20 kt gain and then a 20 kt loss windshear on approach to RWY 07RA (i.e. southern runway, approaching from southwest) and had to undertake a go-around. The plane finally landed at around 1243UTC. The following aircraft first attempted to land at 1232UTC and finally had to divert to Macau after encountering up to 20 kt windshear on final approach.

The Doppler radial winds from the Terminal Doppler Weather Radar (TDWR) 0.6-degree elevation scan over the HKIA and its western approach were generally away from the radar (positive radial velocity -- warm colours), consistent with the low-level east-southeasterly flow (Figure 12). However, at about 3 nm (nautical miles) from the RWY 07R threshold, the radial winds away from the radar were apparently weaker. Narrow streaks of radial winds towards the radar (negative radial velocity -- cool colours) with a typical width of 1 km were seen downwind of Nei Lak Shan (NLS) and Cheung Shan (CS) from time to time.

This is consistent with what was measured on-board aircraft arriving at 1252UTC. Winds measured on-board were southeasterlies as the flight descended from 2,300 ft to 1,350 ft (Figure 13). The wind direction then varied significantly, veering to southwest and then northwest as the wind speed dropped markedly to below 5 kt. As the plane continued its descent, the wind direction again changed significantly to northeast at about 800 ft before veering to southeast, when the wind speed picked up and increased to 10 to 15 kt. The aircraft data thus confirmed the existence of mountain wake with reverse flow downwind of the northeast-southwest oriented ridge southwest of NLS.

In accordance with the Memorandum of Long Term Technical Co-operation between the Hong Kong Observatory and the Air Traffic Management Bureau, Civil Aviation

Administration of China (CAAC/ATMB), my colleague S.T. Chan and I attended a seminar on aviation meteorological services at Yantai City, Shandong Province.

On the day of our arrival, a cold front crossed the region of Yantai. The weather was gloomy with rain. Strong northerlies started blowing in the evening. The winds lasted till the morning. However, by then the clouds were gone. The weather became fine and very dry, as though it was specially for the occasion. 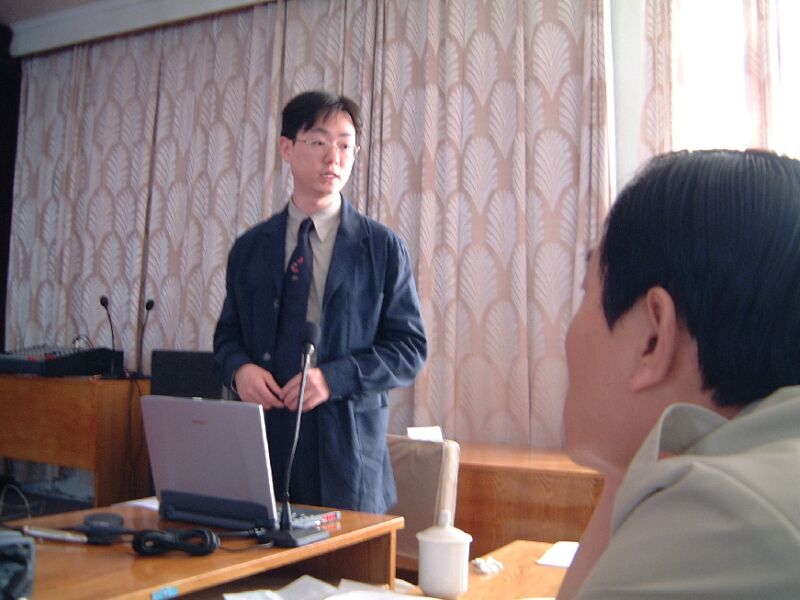 29 aviation meteorological experts from all over the country presented papers on a number of topics, introducing special weather phenomena and development of service networks in different places. Their reports are very innovative and pioneering. The two of us presented a case study of windshear at Hong Kong International Airport and a paper on the use of artificial neural network to predict sea breeze circulation.

Weather systems move fast in eastern China. The northerlies moderated by the time the meeting ended. A moist airstream took over producing white, fluffy clouds, resembling flowers bidding farewell to the two of us.

The Observatory attended the fourth meeting of the Communication / Meteorology / Navigation / Surveillance Sub-Group within the framework of ICAO held in Bangkok, Thailand, during 17-21 July 2000.

Various meteorological topics, including transition plan of the World Area Forecast System (WAFS), exchange of Operational Meteorological (OPMET) information, and implementation of the International Airways Volcano Watch (IAVW), were discussed during the meeting.

The 14th Meeting of the Liaison Group

The 14th Meeting of the Liaison Group on Aviation Weather Services was held at the Observatory on 30 June 2000. Topics discussed included the Intensive Observing Periods (IOP) for windshear in 2000, the World Area Forecast System (WAFS) transition plan, aviation forecast verification scheme and the result of the survey on the Observatory's aviation weather services in 1999/2000.

The 1st Meeting of the Working Group on Training, the Environment and New Developments in Aeronautical Meteorology, World Meteorological Organization (WMO)

The first meeting of the Working Group on Training, the Environment and New Developments (TREND) in Aeronautical Meteorology under the Commission for Aeronautical Meteorology of WMO was held in Hong Kong, China during 24-27 October 2000. Topics discussed included aviation weather forecast verification, windshear, training and impact of aviation on the upper atmosphere. The meeting recognized the work of the Observatory in many areas of aviation meteorology.

Fig.16 The 1st Meeting of the TREND Working Group

'Outstation Manage' - a new name and a new mission. In the past, the electronic maintenance team of the Observatory is responsible mainly for maintaining meteorological equipment. In July this year, the Observatory launched an 'Outstation Manager' pilot scheme. Under this scheme, members of the electronic maintenance team also act as 'managers' of outstations such as radar stations and automatic weather stations. This is by no means an easy task. Since there is no direct vehicular access to some remote stations, the 'managers' need to arrange with the Government Flying Service for helicopter flights to and from these stations. 'Managers' of radar stations at Tai Mo Shan and Tai Lam Chung, on the other hand, have to be in close contact with the Electrical and Mechanical Services Department and the Architectural Services Department for regular inspection and maintenance of station facilities. The 'Outstation Manager' scheme not only broadens the horizon of our colleagues, but also adds colours to their work.