The memorandum was signed at the Hong Kong Observatory by the Director of HKO, Dr Lam Hung-kwan, and the Director of the Meteorological Division of ATMB, CAAC, Mr. Li Huibin.

In the exchange of meteorological information, the two sides would hold regular discussions to explore new communication links and to improve communication methods so as to increase the data throughput and the types of information exchanged. In this way, aviation forecasters and air traffic controllers of both sides can better grasp the weather situation, and provide better services to aircraft and airlines.

In respect of meteorological instrumentation, both parties will exchange technical information on meteorological equipment which will facilitate improvement of the meteorological facilities of airports in the Mainland and in Hong Kong.

Under the memorandum, exchange visits will be arranged more frequently through which staff members of both sides can learn from each other in technology and operation. This will help raise their professional standard. Depending on operational needs, the two sides will also undertake joint technical projects.

The signing of the memorandum has laid a sound foundation for further cooperation between HKO and ATMB of CAAC in future. 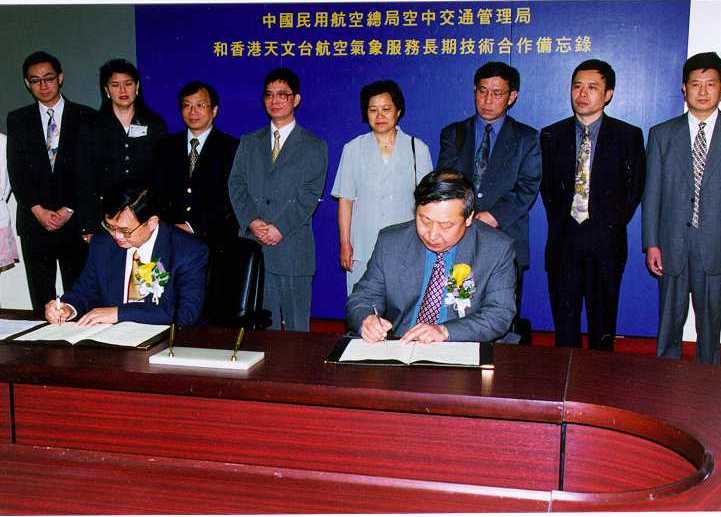 Signing of the memorandum

The Eleventh Meeting of the Liaison Group on Aviation Meteorological Services was held at the Conference Hall of the HKO on 15 December 1998. Sixteen members participated. Dr. H.K. Lam said that the transition of the aviation meteorological service from Kai Tak to Chek Lap Kok was a great success. HKO could now focus on enhancing the services to various users. He stressed the importance of the Liaison Group and urged members to put forward views on the meteorological services and new requirements. 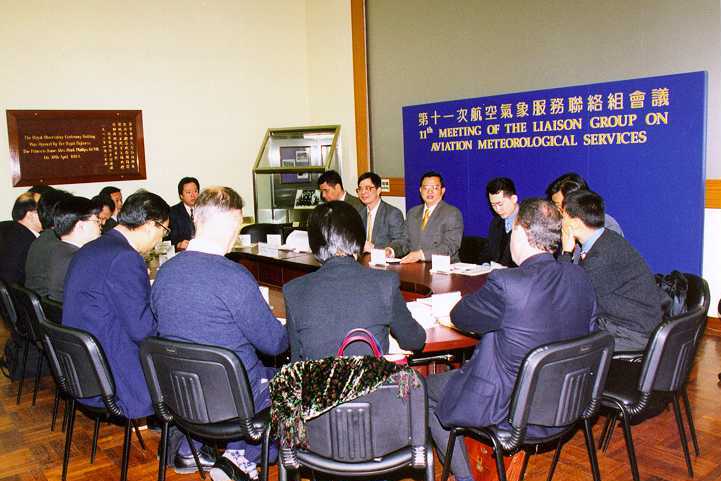 TAFs and METARs are provided to airline operators for pre-flight planning and in-flight re-planning under centralized operational control and ETOPS flights. TAFs and METARs not routinely received from AFTN are extracted from the SADIS broadcast and put on the Meteorological Information Dissemination System (MIDS) for retrieval by airlines. In addition, the new low level significant weather charts for the Middle East Asia area are included in flight document for ETOPS flights to the Middle East.

56 Kbps access to the MIDS was launched in March 1999. To further enhance security, only registered users can access the MIDS with user caller ID authentication.

In order to ensure the proper functioning of all the meteorological systems during the transition to Year 2000, modification to both the hardware and software of some of the meteorological systems was made in early 1999. System-wide tests against all published high-risk dates were subsequently conducted in March and April. We are delighted to announce that all the systems are now validated to be Year 2000 compliant.

A set of manually operated meteorological equipment has been acquired for the AMO as the ultimate contingent. Should all automatic observing systems fail, essential meteorological elements will be measured manually on site and reported to AMO for onward transmission to air traffic control every half an hour via Trunk Mobile Radio (TMR) or other available radio communication means such as mobile phones.

To cater for failure of essential communications, e.g. AFTN on Year 2000 critical dates, a contingency plan is being drawn up to obtain OPMET data via alternate paths such as WAFS satellite broadcasts, Internet and facsimile polling. This forms part of the overall Year 2000 contingency plan of the Civil Aviation Department of Hong Kong which in turn will be part of the ICAO Regional Year 2000 Contingency Plan for the Asia/Pacific Region.

In case public telephone networks become inoperative on entering Year 2000, airline operators can come to the AMO or Meteorological Briefing Area (MBA) inside the Passenger Terminal Building to collect flight documents. The briefing station in the MBA is connected to our MIDS equipment at the AMO via private cables which are date-insensitive.

Extension of the Aerodrome Meteorological Observing System for the Northern Runway

The extension of the Aerodrome Meteorological Observing System (AMOS) for the northern runway (AMOS-N) was installed in September last year. It was subsequently put to trial operation. So far the operation of AMOS-N has been satisfactory. The northern runway was put to emergency use since 12 April 1999.

A number of pilots reported encountering severe windshear at around 1,500 ft on departure on 14 December 1998. In particular, the pilot departing at around 08UTC reported that the airspeed varied by -15 kt to +25 kt around 3/4 and 2 nm from the end of the runway. However, no reports of severe windshear were received for arrival flights.

The northerly monsoon strengthened on that day. The Strong Monsoon Signal was hoisted at noon and remained in force throughout the day. Surface winds at Chek Lap Kok were northerlies around 10 kt throughout the morning and afternoon. However, winds on the mountain tops of Lantau, namely Nei Lak Shan and Yi Tung Shan were generally gale (40 - 50 kt) in the early afternoon. The Sha Lo Wan profiler captured a low level jet at around 2,000 ft.

The shear experienced by the departing aircraft was due to vertical shear as the plane passed through the low level jet. Based on the winds measured on-board a flight departing 8 minutes earlier, there was a rapid increase in head wind component, from 13 kt at 1,420 ft to 39 kt at 3,100 ft.

The on-board wind measurement showed that wind was 10 kt or less near the surface up to around 800 ft. Wind then increased rapidly and was strongest at around 3,350 ft, reaching 50 kt. This corresponded very well with the observation from the Sha Lo Wan profiler. The wind recorded by the aircraft dropped sharply to around 15 kt at 3,800 ft, which was much sharper than that detected by the Sha Lo Wan profiler.

The presence of the low level jet was also well captured by the Terminal Doppler Weather Radar (TDWR) at 6 deg scan. At 0740UTC, around the time the flight departed, the core of the low level jet (with a radial speed of 40 kt or above and is coloured in pink to red) extended from around 800 m to 1,200 m, in fairly good agreement with the Sha Lo Wan profiler.

Departing flights were climbing at very steep angles, 9.6 deg for the one shown above. As a result, the aircraft transit the low level jet very close to the end of the runway and the change in head wind was very rapid. Meanwhile for arrival flights, since they were descending at a lesser angle (3 deg), they experienced the shear further away from the runway end and more gradually.

Based on the Sha Lo Wan profiler data at 0740UTC, the vertical shear at around 1,100 ft was close to 8 kt per 100 ft. Although this was lower than the 8 kt per 100 ft which has been used in the Windshear Warning System at the old Kai Tak Airport, the increase in head wind was nonetheless significant due to the steep climb angle.

The Windshear and Turbulence Warning System (WTWS) was not able to warn the windshear associated with the elevated low level jet since the system used the lowest elevation scan (0.6 deg) of the TDWR to calculate the windshear, which did not intercept the jet stream within the warning area.

The HKO is looking into severe windshear cases reported. Post-flight reports are very important in identifying the location and severity of windshear. We have been receiving post-flight windshear and turbulence reports since airport opening. However, the number of reports has declined significantly in the past few months. A new and simplified pilot report form has been developed to reduce the time required to complete it. Airlines are requested to encourage their pilots to file post-flight report after each flight.

Apart from convective storms and terrain, low level jets and land/sea breezes have been found to cause significant windshear at Chek Lap Kok. These types of windshear are not what the WTWS had been previously designed to detect. Furthermore, although the TDWR is already exceptionally sensitive in being able to detect clear air returns a lot of times, when the weather is fine, e.g. sea breeze cases, the return can be just too weak for the TDWR to determine the wind field. To cover such scenarios, forecasting rules have been developed for our aviation forecasters to issue windshear warnings manually. These rules are also being coded into the WTWS for automatic warning.

We welcome comments and suggestions on our aviation meteorological services. Please send them to the following address:

Director of the Hong Kong Observatory