The Hong Kong Observatory issued the Hurricane Signal No. 10 in the small hours on 24 July 2012 during the passage of Severe Typhoon Vicente. This was the first No. 10 Signal in Hong Kong since Typhoon York 13 years ago in September 1999.

During the past 67 years (1946- 2012) after the Second World War, there were 14 tropical cyclones that necessitated the issuance of the Hurricane Signal No. 10 in Hong Kong.The tracks of these tropical cyclones are shown in Figure 1.

Vicente exhibited a rather unusual track over the South China Sea. It began with a westward track, stalling for about 15 hours some 350 km to the south-southeast of Hong Kong on 22-23 July before moving northwestwards towards the south China coast. It also underwent rapid intensification in 48 hours prior to its closest approach to Hong Kong, strengthening from a tropical storm to a severe typhoon.Such rapid intensification near the territory was unprecedented among the above-mentioned tropical cyclones.

The Observatory has operated a numbered tropical cyclone warning signal system (TCWS) since 1917 to alert the public of the wind conditions in Hong Kong. The current TCWS consists of the No. 1, 3, 8, 9, and 10 signals with their meaning given in Figure 2.Prior to 19733, the signals consisted of the No. 1, 3, 5, 6, 7, 8, 9, and 10, of which the No. 5, 6, 7, and 8 all warned about gale or storm force winds, i.e. wind strength of 63-117 km/h (34-63 knots), coming from wind directions of NW, SW, NE, SE respectively (Figure 3). In order to strengthen the public understanding that all these four signals warned about the same wind strength, these signals were replaced by 8NW, 8SW, 8NE and 8SE respectively in 1973.The Observatory wishes to clarify that the No. 5 signal in the past was the same as the No.8 NW signal today.

As regards the Signal No. 9, the TCWS (Figure 2) states clearly that it is to warn the public that the gale or storm force wind is increasing or expected to increase significantly in strength over the territory. It is issued to warn the public about increasingly destructive winds and is effectively a precursor to the Hurricane Signal No. 10. When the Signal No. 9 is issued, all precautions should be completed and people should stay indoors and away from exposed windows and doors to avoid flying debris.

The TCWS is a proven system for many years to minimize casualties and property damages in Hong Kong due to tropical cyclones.It is important that members of the public should familiarize themselves with the signals, their meaning and the associated precautions to take.

1Information was incomplete for the 1946 tropical cyclone
2All information on Vicente are provisional, based on operational data
3Earlier history of the TCWS prior to 1956 can be found at HKO webpage:
http://www.hko.gov.hk/informtc/tcsignal_history.htm 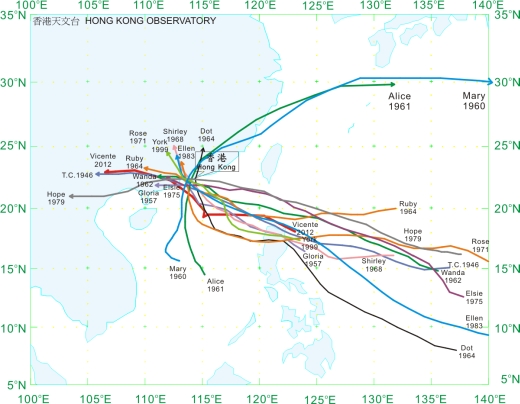 Figure 1. Tracks of the tropical cyclones that necessitated the issuance of the Hurricane Signal No. 10 in Hong Kong since 1946

Figure 3.The tropical cyclone warning signal system operated by the Hong Kong Observatory between 1956 and 1973

Table1.Comparison of Severe Typhoon Vicente with the previous tropical cyclones which necessitated the issuance of the No. 10 Signal 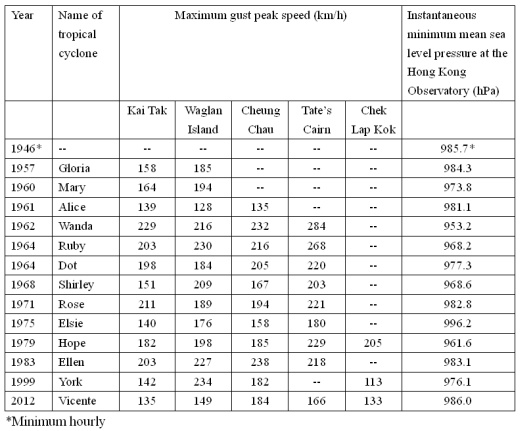 Table2.Maximum gusts and minimum mean sea level pressure recorded in Hong Kong during the passage of Vicente and the previous tropical cyclones that necessitated the issuance of the No. 10 Signal in Hong Kong