NATURE AND STRUCTURE OF TROPICAL CYCLONES

In appearance, a tropical cyclone resembles a huge whirlpool - a gigantic mass of revolving moist air. Many diagrams in text books give the impression that tropical cyclones, like tornadoes, have a tall column-like shape. In reality, they have a disc-like shape with a vertical scale of tens of kilometres against horizontal dimensions of hundreds of kilometres.

A view from space (see following diagram) allows a fuller appreciation of the majestic nature of tropical cyclones. A closer look can bring out further details. The bright patch near the storm centre is the cirrus canopy - high clouds emanating outwards from the top of the centre. Away from this cirrus shield, some low-level spiral cloud lines can also be clearly seen. Most of the heavy rain occurs near the storm centre and along these spiral rainbands. The rainbands rotate in the same sense as the storm circulation and tend to sweep through an area one after another. At a given location, heavy precipitation is usually pulsing at intervals of a few hours. Squalls and gusts increase during the approach and passage of rainbands. Rain becomes persistent and winds violent as the centre of the storm draws near. 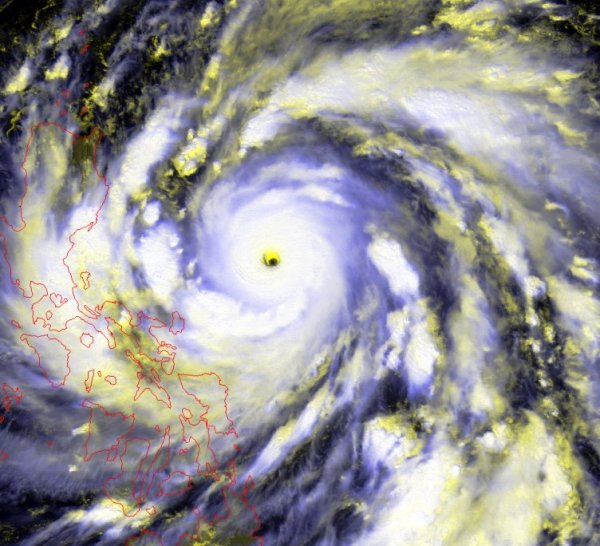 A tropical cyclone is akin to a travelling heat engine. It feeds on an incessant supply of latent heat released from condensation in ascending moist air. The mechanical power generated is of the order of 20 million megawatts and the energy so generated in one day is equivalent to about 20 years' supply of electricity for Hong Kong (at the rate consumed in 1990). The reliance on readily available moisture also explains why tropical cyclones can only survive over the warm oceans and invariably weaken once over land.

However, not all cloud clusters that hover over the tropical oceans succeed in developing into tropical cyclones. The air flow in the vicinity must be organized in a way that allows the atmospheric "heat engine" to operate in its most efficient manner. Otherwise, further development and intensification will be inhibited.

The basic requirements include good cyclonic inflow (i.e. for the Northern Hemisphere, inward spiralling in an anti-clockwise sense) at the lower levels for the initial spin-up process, and good outflow channels at the upper levels for effective ventilation.

The convergence of air at the lower levels and divergence aloft imply a vertical circulation which is schematically shown in the following cross-sectional diagram. Another diagram below shows the corresponding surface wind profile which indicates an increase in wind strength towards the centre. This is understandable in terms of conservation of angular momentum. As the radius of rotation decreases, the rotational speed will increase accordingly. In mature typhoons, the region of phenomenal winds is confined to a ring around the eye wall. The "eye" is typically of the order of tens of kilometres in diameter. It is essentially a core of descending air where clouds are relatively broken and winds are relatively calm. To preserve the vertical structure, it is important that the environmental flow surrounding a tropical cyclone is homogeneous enough so that the shearing forces will not be able to disrupt the axial alignment.

Model vertical profile of a mature typhoon.
The central portion is the eye and eye wall. 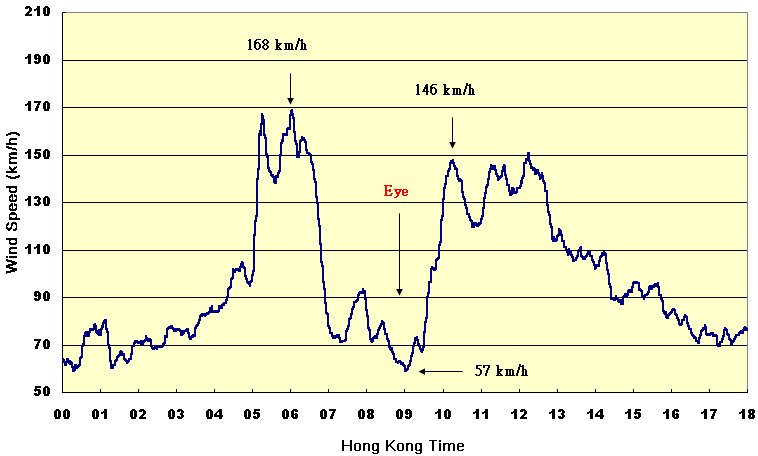 Wind speed record of Waglan Island during the direct hit of Typhoon York over Hong Kong on 16 September 1999. Notice the dramatic fall and rise in wind strength during the passage of the eye of York.

As has been shown, it is only through a combination of favourable circumstances that a tropical cyclone can develop. By the same token, the absence of these circumstances will generally lead to a weakening of the storm. Embryonic storm cells will never be able to develop further under prevailing unfavourable climatological conditions and this is why the South Atlantic and the eastern South Pacific are devoid of tropical cyclones.

Once formed, tropical cyclones can have a lifespan varying from a few days to a few weeks. Not all of them progress the whole way to full typhoon status. In fact, over the western North Pacific and the South China Sea, only about half of them on the average manage to attain typhoon intensity.