The Observatory provided professional weather service to the People's Liberation Army (PLA) in support of their 8.1 Parachute Brigade's show on 1 July at the Hong Kong Stadium and 2 July at Victoria Park to celebrate the 15th anniversary of the establishment of the Hong Kong Special Administrative Region (HKSAR). The service, including specialized on-site weather observations and forecasts, helped ensure the safety of the members of the brigade. This was also the first time the Observatory successfully implemented a mobile upper air sounding system adapted from the system used at King's Park in-house to measure upper-level winds at different locations of Hong Kong.

Winds below 2000 m, cloud amount, cloud base height, precipitation and visibility are critical weather elements required for the smooth running of the parachute show. In particular, accurate upper-level winds are required for accurate formation and landing of the parachutes. To provide the observations at the event site, a mobile upper air sounding system, specially installed into the survey vehicle, was deployed on site to receive the data from the radiosonde attached to a helium-filled weather balloon that was launched at the event site. Mounted with antennas and processing unit specially configured by the Observatory's technical staff specifically for the survey vehicle, upper-level winds were collected and processed in real-time inside the vehicle and made available to the PLA within 10 minutes after the release of the balloon.

Apart from the provision of upper-level winds on site, the Aviation Forecaster provided site and flight route specific forecasts to the PLA. A Weather Observer was also deployed to the site of the event to make cloud and visibility observations. All those involved were very delighted that the parachute shows were successfully conducted and the crowds of spectators showed their appreciation with heartfelt cheers and applause. 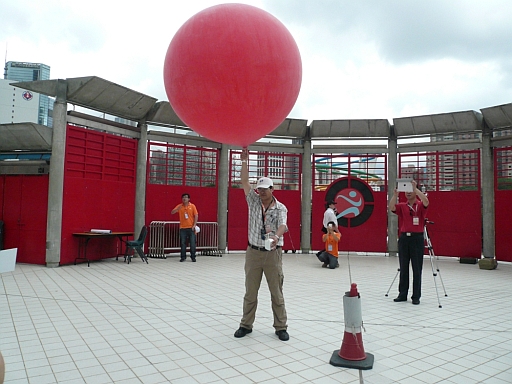 John KW Chan, Scientific Officer of the Observatory, released the weather balloon with a radiosonde to collect upper-level wind data at the Hong Kong Stadium in support of the parachute show on 1 July 2012. 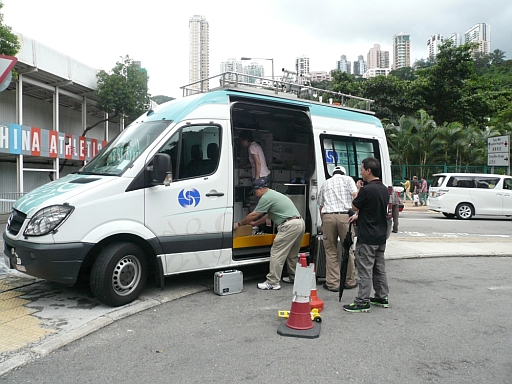 The Observatory's techincal staff were collecting the radiosonde wind data via a processing unit installed in the survey vehicle outside the Hong Kong Stadium.

Five members of the 8.1 Parachute Brigade jumped out of the helicopter at about 1300 m high and ignited colourful smoke bomb as they sprialled down. A pattern of five colored rings was created to resemble a rainbow. Photo taken by Queenie Lam of the Observatory at Victoria Park on 2 July 2012.