The Hong Kong Observatory participated in the "Hong Kong ICT Awards 2009 : Best Innovation & Research Award" Exposition held on Saturday, 14 November 2009. Two exhibition booths were set up to display the Observatory's "SWIRLS" nowcasting system and the LIDAR Windshear Alerting System (LIWAS). Organized by the Internet Professional Association, the exposition took place at the Covered Piazza Area of Timesquare in Causeway Bay and attracted a large number of visitors. Many visitors found the "Rainfall Nowcast for the Pearl River Delta (PRD) Region" product, which was developed from "SWIRLS", very useful. Moreover, the computer game, which vividly simulated and demonstrated the impacts of windshear on aircraft, was a draw to many children. It is hope that through participating in such activities, the general public has a better understanding of the Observatory's research work and scientific achievements.

The nowcasting research& development team (the three people in the back row) of the Observatory explaining to a father and his son about the technical knowhow behind "SWIRLS" and the usage of the "PRD rainfall nowcast" product. 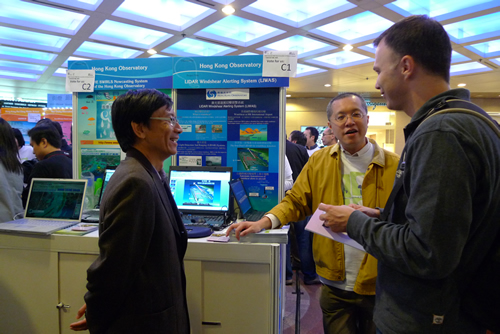 Aviation meteorologists (left and middle ones) of the Observatory explaining "LIWAS" to a visitor.