When the Observatory issues Thunderstorm Warning, members of the public sometimes receive the following message: "Gusts reaching 70 kilometres per hour or above may affect Hong Kong". As wind speed is expected to reach 70 km/h, one may ask whether this situation is similar to the wind speed criteria of the No.8 Gale or Storm Signal (i.e. sustained wind speed of 63 to 117 km/h)?

According to meteorological definitions, the term "gust" as mentioned in Thunderstorm Warning differs from the "sustained wind" criteria of Tropical Cyclone (TC) Warning Signals. "Sustained wind" is the wind speed averaged over a certain time period, which is the basis for the Tropical Cyclone Warning Signals. In Hong Kong, the averaging period is 10 minutes. "Gust" refers to the instantaneous wind speed, which is usually higher with larger fluctuations when compared with the sustained wind. As an illustration, let us compare the case of Tropical Storm Wipha in July 2019 and a thunderstorm case in April 2019. On 31 July 2019, TC Signal No.3 and Signal No.8 were once issued during the passage of Tropical Storm Wipha. The 10-minute mean wind speed at Cheung Chau showed an increasing trend during that morning, and maintained at strong to gale force during most of the time in the afternoon and evening (Figure 1a). On the other hand, the gusts associated with thunderstorms can rapidly increase and decrease within a few minutes (i.e. with large fluctuations). On 20 April 2019, an organised band of thundery showers moved southward from inland Guangdong and crossed Hong Kong in the afternoon (Figure 2). The automatic weather station at King's Park, which is located in the urban areas, registered the maximum gust of 117 km/h associated with the passage of the squall line during 2 p.m. to 3 p.m. on that day (Figure 1b), which is the highest record since the operation of the station in 1992 excluding tropical cyclone cases. During the same period (2 p.m. to 3 p.m.), the maximum 10-minute mean wind speed registered at King's Park was only 36 km/h, showing the possible large difference between gust and sustained wind. 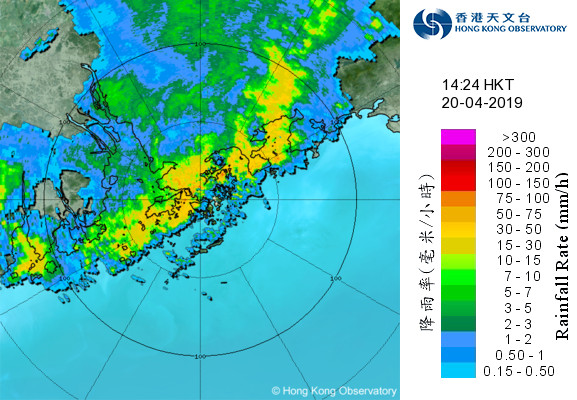 Generally speaking, high winds brought by tropical cyclones can persist for longer time, and the description of wind strength (such as fresh, strong and etc.) in weather reports refers to sustained wind. On the other hand, violent gusts brought by intense thunderstorms last for shorter duration, but with larger fluctuations associated with the rapid development and dissipation of thunderstorms. Even though the gusts brought by thunderstorms can be rather short-lived, they can be astonishingly destructive due to the rapid soar of wind speeds. Violent gusts can capsize small vessels, and pose danger to people engaging in outdoor activities. The public should take note of the Observatory's information on thunderstorms and the corresponding gust information. When the term "squally thunderstorms" or "violent gust" appear in weather reports, you should be beware of the sudden increase in wind speed or drastic changes in wind direction due to thunderstorms, and take appropriate precautionary measures.

One note-worthy point is that violent gusts associated with thunderstorms can occur in TC situations. For example, when Standby Signal No. 1 is in force and the tropical cyclone is still at a distance from Hong Kong, heat-triggered thunderstorms could still bring violent gusts to Hong Kong. Hence, under this situation, the public should also pay attention to the corresponding gust messages in addition to the TC information.