Every year during the spring season, the northern part of China is affected by dust-storms, resulting in serious air pollution, poor visibility and thereby air-traffic delays. However, over the other parts of the Earth, such as West Africa, Arabian Peninsula and Arizona, USA are threatened by another kind of powerful dust storm, namely the Haboob[1].

Haboob is produced by intense convective cells (microbursts) over dry regions, usually near dessert areas where dust and sand can be easily lifted up by downdraughts from convective cells. When the cold air aloft is brought to the ground by the downdroughts, it often spreads out and develops a gust front at the leading edge (Figure 1). The gust front will then build up a sand wall by dragging up dust and debris into the air. The passage of Haboob may cause a rapid change of the weather conditions; such as thundery showers, reduction of visibility to less than a few metres, sudden drop of temperature and abrupt increase of the wind speed. 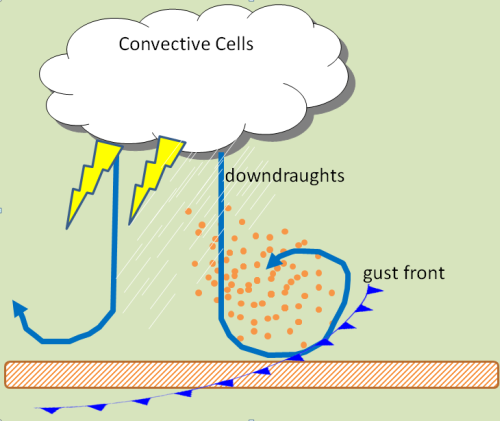 The Sahara in Africa, the worlds largest desert , is also a preferred region for the occurrence of large size Haboobs. During the early summer, dry northeasterly airstream flows across the Sahara desert; meanwhile, the moist summer monsoon migrates into West Africa. When these two airstreams meet, it triggers intense convective activities which may produce Haboobs. According to the reference[2], Haboobs could be over 1000 kilometres in scale and sand particles could be lifted to over 1000 metres. The areal coverage of Haboobs is huge and they are indeed a rare natural phenomenon in the world.

Figure 2:  A schematic of dry northeast airstream meets with moist