The duststorms that affected northern China in the past couple of days have spread into the East China Sea. Satellite pictures indicate that, at 1 p.m. 21 March Thursday (Hong Kong Time), the front end of the duststorms is near 30 degrees north over the East China Sea, which is more than 1000 kilometres away from Hong Kong.

Spokesman of the Hong Kong Observatory indicates that the prevailing southerly winds over southern China do not favour further spread of the duststorms to southern China. From the night of 22 March (Friday) to 23 March (Saturday), a cold front will reach southern China and winds over the lower atmosphere will change to northerlies then. As rain near the cold front is expected to precipitate out dust in the air, the chance of the duststorms to affect Hong Kong is rather low. 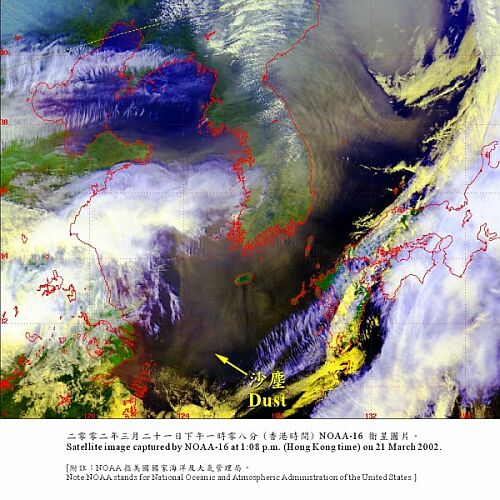 In contrast with the image the day before (21 March 2002, Thursday), extensive rain and clouds cover the East China Sea on 22 March (Friday). The rain will have the effect of washing out the dust.