Use of Fog - a source of water supply

Use of Fog - a source of water supply

In general, fog brings us inconvenience to our daily life. However, have you ever thought of using fog as an alternative water source? In fact, in some arid but foggy places, fog could serve as an efficient water supply.

Antofagasta is located in the Atacama Desert which is situated at the northern part of the capital of Chile, San Diego. Although the Atacama Desert is located near the coast (Fig.1), the coastal waters are under the influence of the South Pacific subtropical ridge with prevailing dry descending offshore winds. When the cold Peruvian (Humboldt) Current (a cold ocean current) crosses the coastal waters, only low level clouds or fog but not rain will form because of the subsidence. Besides, the Andes mountains block the moist air from the Atlantic Ocean, making the desert renowned for being extremely dry. It is known that the annual average rainfall is just around 1mm1. Twenty years ago, in a village called Caleta Chungungo neighbouring Antofagasta, villagers were celebrating for having a new source of water supply. The celebration caught media attention around the world. The water supply did not come from water pipes of neighboring cities, but from a network of fog fence (or fog collector)mounted on Chile El Tofo mountain. The network could provide a daily average of 15,000 litre of water2. 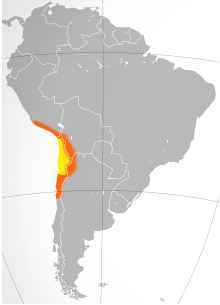 There is around 0.05 mg of water in 1m3 fog. The diameter of water droplet in fog is in general around 1 to 40 µm (1 mm = 1,000 µm) , much smaller than that in rain (500 to 5,000 µm). Owing to its tiny dimension, the water droplets in fog blow with the winds. The fog fence collects water by making use of this feature. The design of fog fence is basically a double-layer fine plastic mesh, standing vertically among the fog with the mesh facing the prevailing winds. When fog moves across a fog fence, water droplets in the fog would deposit on the mesh and the double-layer structure would cause the droplets to coalesce, and run through the collecting pipe located at the bottom of the fence. Fog fence is considered to be simple, energy saving and cheap; so many developing countries actively investigate the feasibility of using fog fence to provide water. However, the effectiveness of using fog fence would depend on local geography and climate; besides, water could be contaminated by dust or bacteria in the course of water collection. All these bring challenges to the use of fog fence as an alternative water source.