As you are aware, lightning strike is a natural phenomenon. A strong flash of light in the dark sky creates spectacular visual contrast. If you look at it from an aesthetic point of view, it is stunning. Modern Chinese writer and poet, Guo Moruo, also expressed the power of thunder and lightning in his Ode to Thunder and Lightning. In reality, people are scary about thunder and lightning because they could get injured or even killed if being hit.

In fact, most of the lightning strikes on people could be prevented. A thunderstorm occurs when the electric charges in a cumulonimbus cloud accumulate and the potential difference between cloud and ground reaches a certain level, leading to a cloud-to-ground discharge. This is the lightning phenomenon we see. When you see lightning, the thunderstorm could be very close to you. Temperatures of the air near the lightning discharge path increase suddenly and hence the volume of air expands sharply, resulting in shock waves which bring about the loud thunder. Deriving from the speed of propagation of sound waves in air, if you happen to hear thunder 3 seconds after seeing a lightning strike, it indicates that the thunderstorm is about 1 kilometre away from you. If you are in an exposed area, you should find a safe place to shelter as soon as possible, but you should refrain from staying under a tree or near a mast as lightning tends to strike tall objects. You are more likely to be hit by lightning strike if you stand close to these objects.

If you are driving and encountering thunderstorm and lightning in the countryside, do you think it is safer to stay inside the car?

In the event of a thunderstorm, the safest way is to take shelter indoors. However, if you stay in the car, close the doors and windows tightly, and lower any external antenna to avoid attracting lightning, this can also prevent you from getting struck by lightning. It is because even if the vehicle is struck by lightning, the car case can act as a shield, and the current will flow through the car case and tires and then to the ground. The current will not pass through the people in the vehicle. What is the principle to keep the people safe in a metal case then? This is mainly due to the Faraday Cage effect.

A "Faraday cage" is a cage made of metal or a good electrical conductor. An English physicist invented the cage which was named after his last name. In 1836, he discovered that the excess charges on a charged electrical conductor (such as metal) exist only on its surface (i.e., the outer case) and do not affect the objects enclosed by it. Therefore, the case of the electrical conductor can "protect" its interior.

When driving in a thunderstorm and if the car is struck by lightning, due to the "Faraday cage" effect, the current of the lightning strike will flow through the metal case, the axles and the wet tires of the car to the ground. Therefore, when encountering thunderstorm and lightning while driving, it is basically safe to stay in the car. It should be noted that when a car is struck by lightning, the transient high-voltage electricity may damage the electronic equipment in the car and make it malfunction. This situation is similar to the case when a lightning strike hits an aircraft. If the safety conditions permit, it is best to park the car in a safe place by the road, away from trees and masts, turn off the engine and electronic audio system, close all windows and doors, and not to touch the window handles and others. Of course, before going out, you should take note of the weather information issued by the Observatory, and avoid outdoor activities in case of severe weather. 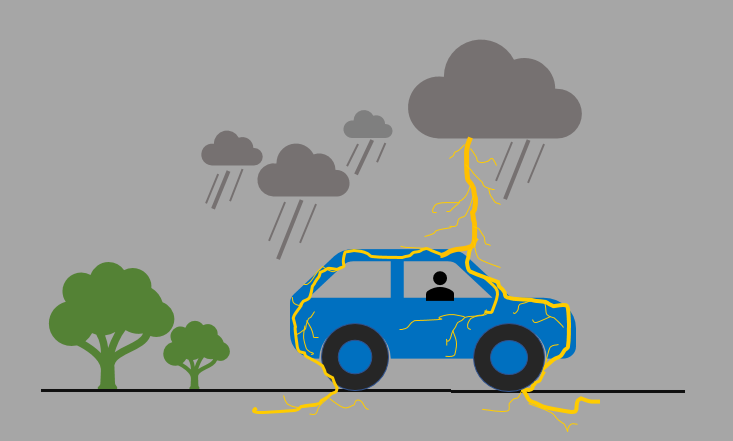 The electric current of the lightning flowing through the car case and the tires and exiting to the ground. The metal case of a car acting like a Faraday cage, a "Thunderbolt Hood" to protect people inside from being struck by lightning.