"Shi Hu Feng" is the layman's description of the gust associated with squall lines. A squall line is a cluster of severe thunderstorms or storm cells along a line. Squall lines are fast moving and destructive, and will lead to sudden changes in the wind direction with an abrupt increase in wind speed. The severe gust associated with squall lines can exceed 100 kilometres per hour. Apart from heavy downpour and thunder, some of the squall lines even carry hail or hailstones and tornadoes. On the radar display, a squall line will normally appear as a narrow band of intense rain area, sometimes bow-shaped, with a width of about ten to a few tens of kilometers, but will extend from tens to hundreds of kilometers in length.

In late spring and early summer, cold fronts or troughs of low pressure often drift south and affect southern China and its coastal area. Formation of Northwest Shi Hu Feng is probable when upper atmospheric disturbances propagate from west to east near the trough. A bow-shaped squall line that associated with a Northwest Shi Hu Feng will normally approach Hong Kong from the northwestern part of the Pearl River Estuary. The squall line will first affect the northwestern New Territories such as Lau Fau Shan and Yuen Long before sweeping towards other parts of the territory. For more detailed description of Northwest Shi Hu Feng, please refer to another article at the Educational Resources of the Observatory 'Squall lines and "Shi Hu Feng" - what you want to know about the violent squalls hitting Hong Kong on 9 May 2005'.

Beside, when a tropical cyclone moves over the sea areas near Taiwan, the subsidence air associated with the tropical cyclone would often lead to fine and clear weather over the south China coastal region before the outer rainbands of the tropical cyclone start affecting Hong Kong.  Under prolonged sunshine, inland Guangdong will become very hot in the afternoon such high surface temperature may trigger the formation of thunderstorms.  Since the background flow in the middle levels of the atmosphere over the region would normally be north to northeasterlies under such situation, the thunderstorms formed inland will move towards Hong Kong.  When several severe thunderstorms or storm cells cluster into a squall line, the so-called Northeast Shi Hu Feng will then form.  The squall line will generally move from inland towards the northern or northeastern part of the New Territories before sweeping further south to affect other parts of the territory.  The episode of the squall line on 27 July 2008 is one typical case of Northeast Shi Hu Feng in Hong Kong (Figures 1 to 4). During the passage of the squall line, gust exceeding 100 kilometres per hour was recorded at Tai Mei Tuk and hail was also reported in some parts of the New Territories. 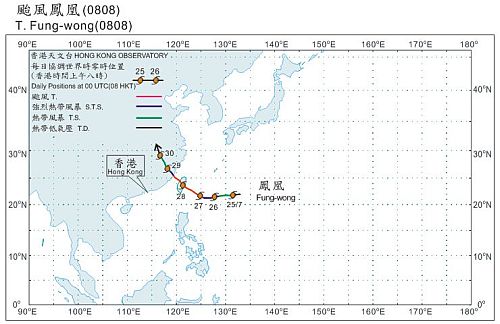 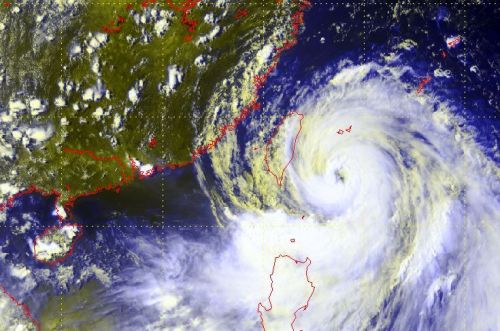 Figure 2: When Typhoon Fung-wong moved over the seas near Taiwan, its subsidence air led to almost cloud-free condition in the south China coastal areas. Under prolonged sunshine, thunderstorms were triggered over inland Guangdong. (Satellite picture at 3 p.m. on 27 July 2008)

Figure 3: The elongated intense echoes on the radar image ( 3 p.m. on 27 July 2008) shows that a squall line was crossing Hong Kong from the northeast. 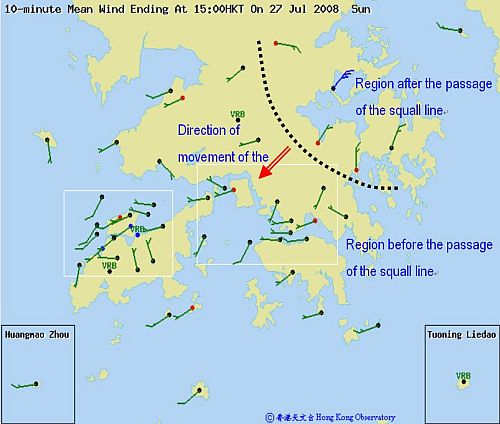 Figure 4: The surface wind distribution at 3 p.m. on 27 July 2008 shows that the winds changing rapidly from southwesterlies before the arrival of the squall line to northeasterlies after the passage of the the squall line (the dash line shown on the figure indicates the shear line).