Why does Lightning always Come before Thunder?

Why does Lightning always Come before Thunder? 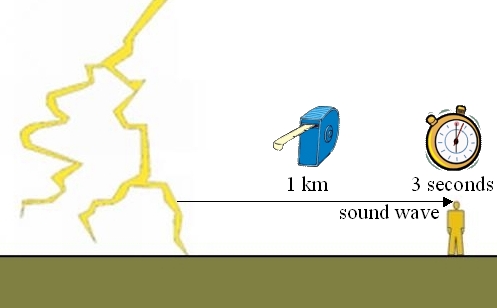 A person at 1 km away from the thunderstorm hears the thunder about 3 seconds after seeing the lightning flash.(Objects in the diagram are not to scale)

As a rule of thumb, by counting the seconds between the flash and the thunder and dividing the number by 3, you can estimate your distance from the thunderstorm in kilometers.  For example, if you hear the thunder 9 seconds after seeing the flash, the thunderstorm should be about 3 kilometers away from you.  If you see a flash and hear a thunder clap almost simultaneously, the storm must be very near you. Seek shelter immediately.

Lightning always comes with thunder.  If you see a lightning flash but cannot hear any thunder, the thunderstorm is most likely be quite far away from you.  The thunder clap must have been deflected up the sky.  The longer the sound travels, the more it will be deflected away from the ground.  Typically, thunder is seldom heard beyond 15 kilometers from the storm.